During the Minnesota Wild’s long playoff drought, the team was in the process of stacking its farm system. All the main young prospects are now NHL-caliber players in the form of Jason Zucker, Charlie Coyle, Mikael Granlund, and Nino Niederreiter. Each of the four players is 26 or younger, meaning that they haven’t yet hit their peaks. It is a scary thought for opposing teams to know that these guys will continue to produce and get better for years to come.

I truly believe that Coyle is the team’s best trade asset and one of its least productive forwards. That doesn’t mean that he is a bad player, but in strict comparisons, he consistently falls below the mark of his fellow teammates. Coyle did post his 200th point in the NHL recently, with 78 goals and 122 assists. He did so in 394 games, making him just above a 0.5 points-per-game average. The former 20-goal scorer has a career plus/minus of plus-27 to add to his credentials. 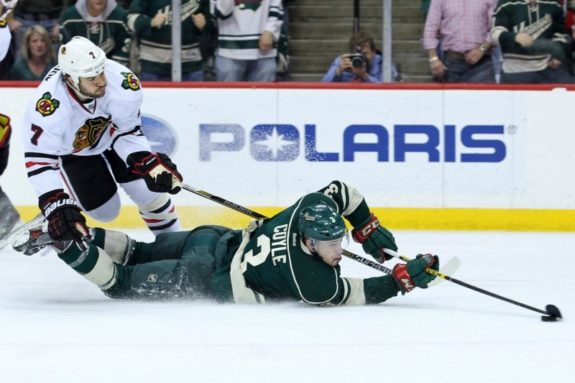 Something of an issue for Coyle is that coaching has kept changing his position between wing and center. He is still just 25 years old, and adding position changing to the mix isn’t a good look for the player. He is already forced to adjust to the speed of the game as well as feel the pressure of a constant playoff contender. Bruce Boudreau specifically is not a fan of sticking with the same line, and at times it looks like the team’s chemistry is off. Years ago when Coyle was just coming into the league, he was paired with Mikko Koivu and Zach Parise. He looked very sharp and played some of his best hockey on that line. I don’t understand why Boudreau won’t experiment when he is so willing to do so for everyone else.

Granlund will actually be turning 26 years old in about one week, during his sixth season for the Wild. He has career totals of 72 goals, 173 assists, and 245 points. He has a career plus/minus of 20 in 373 NHL games. That is an extremely impressive resume for the young stud. He is on pace to finish with 20 goals in back-to-back seasons for the first time in his career this season. His first four seasons were underwhelming, although campaigns two through four displayed an elite playmaker racking up 30 assists in all three seasons. During the early part of his career, Granlund was a full-time center. 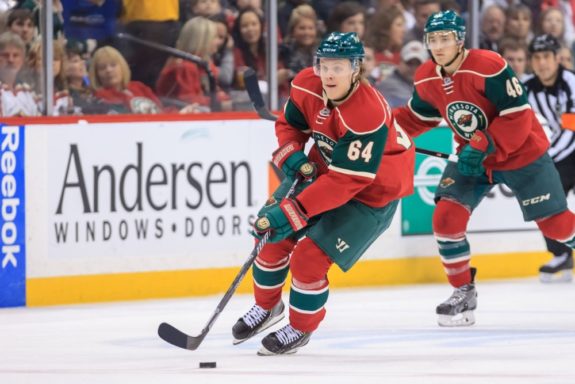 Now he has been moved to the wing and has flourished. During the 2016-17 campaign, Granlund saw career bests in goals (26), assists (43), points (69), plus/minus (23), shots (177), and time on ice per game (18:49.) His breakthrough campaign made a huge impact on the team and helped him earn a three-year, $17.25 million contract. This season isn’t looking quite as groundbreaking as last year, but Granlund is proving himself to be not only one of the team’s best young forwards, but one of the team’s best players.

The 6-foot-2, 216-pound Swiss forward is everything you could dream of in today’s NHL, except consistency. Nino has 98 goals, 96 assists, and 194 points in a grand total of 363 games in a Wild sweater. That isn’t bad for five seasons, including the fact that he has been hurt for more than 10 games this campaign. Last season he had a career year with his best production in goals (25), assists (32), points (57), and plus/minus (17.) It was his third 20-goal season in the NHL, and he is on pace for a fourth this season.

Niederreiter recently turned 25, so he will be productive for years to come, and thanks to his brand new five-year, $26.25 million contract, the productivity will be coming in a Wild sweater. Boudreau has brought the best out of the young player, but consistency is still a factor. On Jan. 4 vs. Buffalo, Nino put in three goals. He followed it with three games of zero points before putting up another goal. After another three-game break, he scored again. Scoring every single night is unrealistic but he needs to get an assist or score a tad more frequently if he wants to be an elite goal scorer.

It is easy to compliment the eldest of the group, at a whopping 26 years old. Saturday afternoon in the Wild’s shootout loss to Anaheim, Zucker scored his 23rd goal of the season, which is a career high. He is now a three-time 20-goal scorer, although this year is only his second to eclipse 40 points in a single season. His career marks in assists (25), points (47), and plus/minus (34) under Boudreau’s first season with the team helped propel him to a much larger role this season. 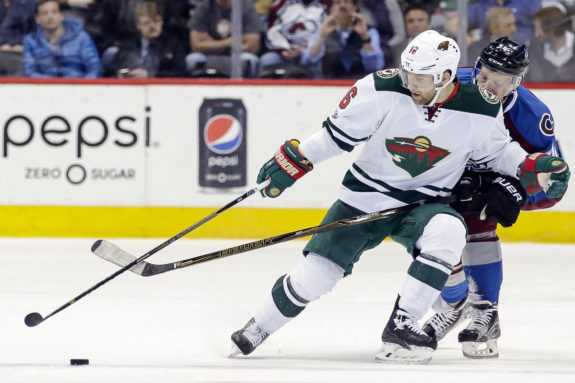 His previous best time on ice per game was during the 2015-16 campaign where he played 15:35 per game. This season, he has demolished that mark with 17:01. Some of that can be contributed to injuries, but the bigger element is raw skill. Speed is the name of the game and it is Zucker’s top weapon. If Granlund or Ryan Suter can spring him open, he is not the guy you want racing down the ice to meet your goaltender one-on-one. His shot has improved dramatically and he is taking care of the puck a lot better now.

Related: “What Is Jason Zucker’s Value to the Wild?”

Coyle is the worst of the four; he is one of the two that possesses good size, yet it doesn’t come into play. He isn’t a big hitter nor is he as good with the puck as is expected. He scores too infrequently to be considered the best. Niederreiter is the other player with great size. There isn’t much to say about the guy that isn’t positive except for his lack of consistency, which is something that can hopefully be fixed. He is the type of forward that could break out with a 30 or 35-goal season. Wild fans certainly hope that is true.

That leaves Granlund and Zucker. Both are great players who play different games. If I had to pick between the two, I would say Mikael Granlund is the Wild’s best young forward. Zucker is full of speed and intensity and is a constant in the Wild’s goal leaders. His hustle is always turning into scoring chances for himself and his linemates.

Granlund is in a league of his own. After some disappointing seasons, he has finally flourished and it is a beautiful sight. His goals can be flashy but the crisp passing is going to give him a real shot at one day knocking Koivu off the all-time leaderboards in Wild history. He is also a good defensive. After Koivu retires, Granlund will be a real candidate to be captain of this team going forward.