We’re a quarter through the NHL season, and even now the battles for positioning are intense. But how good of an indicator of the year-end results are the standings at this point? Over the past seven seasons, an average of 3.4 teams in playoff position at the quarter-mark of the season missed the playoffs. That’s over 20% of the teams currently sitting in a top-8 spot in their conference who will be ending their seasons on April 27.

The top-ranked team at the quarter mark in each conference has made the playoffs every year since 2001-02, when a five-game December losing streak derailed the Rangers. (The Blueshirts went on to win a total of five games in January and February combined, on their way to an eleventh-place finish in the conference.)

That bodes well for the Pittsburgh Penguins and Chicago Blackhawks, who lead the East and West, respectively. After the top spot, though, nobody’s safe. Eight top-three seeds have missed the playoffs over the past seven seasons. Surprisingly the #2 and #6 seeds have been most likely to miss the postseason over the past 7 seasons. 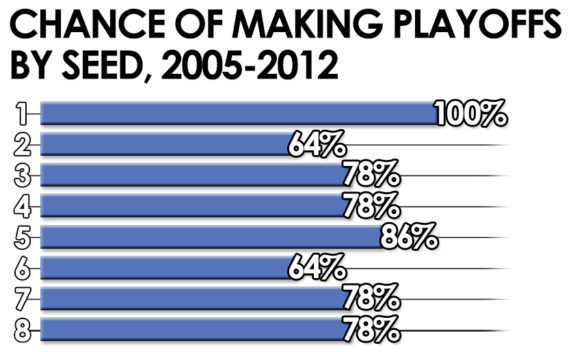 Only once, in 2008-09, did the top eight remain consistent from the quarter mark until the end of the season. In the Eastern Conference that year, the biggest move was the New York Rangers slide from #2 to #7. Out west, only Minnesota fell off, allowing the St Louis Blues – then in 13th place – to climb back up and claim the #6 seed.

Falling Out of Contention

In four out of the past seven years, a second-ranked team has fallen out of playoff contention. Does anyone remember that the Columbus Blue Jackets were in second place in the Western Conference at this point in 2010-11? Probably not, since they cooled off considerably and plummeted to 13th place by season’s end. The St. Louis Blues followed the same path that year, dropping from third to eleventh. The 2007-08 season saw the Blackhawks and Blue Jackets both fall from the top 5 and miss the playoffs.

In five of the past seven years, a top-3 team in the conference has failed to make the postseason. Of Boston, New Jersey, Anaheim, and Vancouver, the teams currently slotted #2 and #3 (by points, not counting division winners), who might be most likely to repeat that feat?  And which coach is most likely to be fired as a result? 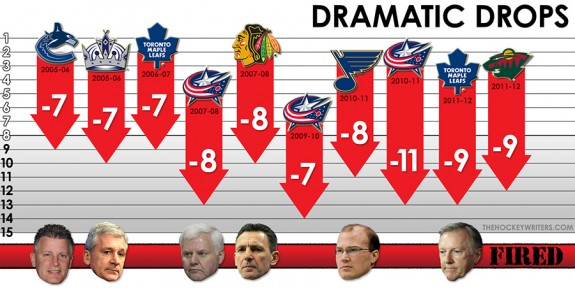 Fighting Their Way Into the Playoffs

For every top-eight team that drops out, a spot opens up for a team that struggled over the first quarter of the season.

The San Jose Sharks (2011-12) and Pittsburgh Penguins (2007-08) both battled their way up to claim the #2 seeds in the playoffs. At the quarter mark of their respective seasons, they both sat uncomfortably in 11th place.  In the past seven seasons, a total of six teams have gone from possibly missing the playoffs to earning home ice advantage.

No effort was greater, though, than that of the 2007-08 Washington Capitals. After going 6-14-1 in their first 21 games, the Caps were dead last in the league. Coach Glen Hanlon was fired. Replacing him was the colorful and energetic Bruce Boudreau, who turned things around in the District of Columbia. The team worked their way up the standings, eventually clinching the #3 seed by winning the Southeast Division. (For our purposes, we show them by their point ranking, which was sixth in the conference. Effectively, though, the Caps went from last place in the NHL to having home ice advantage in the first round of the playoffs.)

The cream rises to the top, or so the saying goes. In this case, it seems to hold true.   Two cup winners, the 2007-08 Detroit Red Wings and 2006-07 Anaheim Ducks, were leading their conference at the quarter mark.  Only one champion, the 2011-12 Los Angeles Kings, found themselves outside the playoff picture at that point.

In a full 82-game season, there’s more time to improve and more opportunities to put up points. The likelihood still exists, though, as it did in the lockout-shortened 1995 season, that the playoff picture will look different than the standings do today. Maybe even dramatically different. The possibility is enough that you simply can’t get too comfortable with your team’s spot in the standings right now.