NHL free agency is exactly a month away from today, and the New Jersey Devils will have plenty of money to spend come July 1. One of their most significant needs this offseason will be finding a top-four defenseman that has some puck-moving abilities and can shut down the opposition’s best scoring threats on a nightly basis.

The defenseman that has caught most everyone’s attention this season is John Carlson. He’ll be an unrestricted free agent after having a career season that will most likely get him a max contract in term and dollar. Even though the Devils will have more than enough money to afford him, they’d be best off not pursuing him once free agency opens up. Let’s take a look at why that’s the case.

Before getting into the reasons why the Devils shouldn’t pursue Carlson, let’s take a look at why he’s considered the best defenseman in this year’s free agent market.

Before 2017-18, he had surpassed 50 points once in his career (2014-15). This season, he finished with 68 points, which was a career-high. He also was a weapon on the Capitals power play, where he totaled four goals and 28 assists. In addition to scoring in bunches, Carlson fired 237 shots on goal. That was second on the Capitals to only Alex Ovechkin and was again a career-high.

Right-handed defenseman come at a premium in the NHL. On the surface, his numbers look pretty good. He’s a top-four defenseman with offensive ability and can log a ton of ice time. He’s likely to have multiple suitors on July 1; so why shouldn’t the Devils be one of them?

For starters, Carlson’s influence at five-on-five isn’t what one might suspect. A deeper dive into his underlying numbers show they aren’t particularly overwhelming. Over the last three seasons, the Capitals had a 49.6% Corsi (CF%), 54.7% goals for (GF%) and a 48.9% expected goals (xGF%) when he was on the ice. Those numbers aren’t awful, but as the following graph will show, the Capitals didn’t always get the best results with Carlson on the ice. 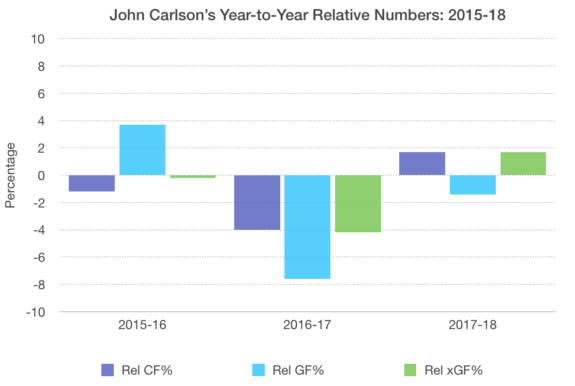 Even though Carlson’s stats in the graph above aren’t ideal, they don’t mean he’s a bad defenseman, and I’m not suggesting that he is. Nevertheless, they do raise some concerns and suggest that he may not handle tougher defensive minutes as well as thought. If that’s the case, it’s one reason why the Devils should be wary of giving him a long-term deal.

It’s certainly possible, but looking at his last three seasons, I wouldn’t get my hopes up. From 2014-17, he averaged 43.6 points per season. That’s more than a solid average, but it’s still 25 points off what he totaled this season. However, he had been a steady contributor at five-on-five, where he averaged 1.17 points per 60 minutes (P/60) from 2014-17. That was fifth best in the NHL for a defenseman to play 1000 or more minutes and put him amongst names such as Victor Hedman and P.K. Subban.

What Carlson benefited from most in 2017-18 was his production on the power play, which skyrocketed from previous seasons. Of his 68 points, 32 of them came while the Caps were up a man. From 2014-17, the most he had totaled on the power play was 16 points and had only accumulated more than 20 points once in his career before 2017-18.

If his offensive totals come down, it’ll most likely be because he isn’t able to repeat his power play numbers. If he signs with the Devils, he’ll have strong competition to play on their first power play unit. Will Butcher was one of the most productive point producers with the man advantage this season. If Carlson doesn’t get those minutes, it’ll be even more unlikely for him to sustain his production.

Related: Devils Need Zacha to Step It Up

Why the Devils Should Avoid Carlson

Every offseason, there’s always a player or two that causes a stir amongst free agents. On defense, it’s usually the type of player who doesn’t contribute a whole lot of offense and but does the little things well, like blocking shots. Carlson is not that in any form. Any team that signs him would be upgrading on defense, including the Devils.

That said, for the money he could fetch, the Devils would be best off not getting in on the sweepstakes. TSN’s Bob McKenzie believes he’ll fetch $7 million-plus, while Hockey Graph’s Matt Cane projects a deal of eight years that could average $8.6 million a year. For argument’s sake, let’s say Carlson signs somewhere for seven or eight years at $7.5 to 8 million per year – is he worth that kind of contract?

His underlying numbers at five-on-five don’t suggest so, and he’s unlikely to score at the rate he did in 2017-18 going forward. He’s a more-than-capable defenseman, but for someone who will be 29 by next January, it’d be quite the risk for the Devils. If they’re going to spend that kind of money for an upgrade on defense, it may have to wait, and that leads me to my next point.

Devils Should be Looking to 2019 Free Agency

Although this class is quite weak, next summer’s crop of free agent defensemen has the potential to be one of the most loaded we’ve seen in years. Next year’s group could include the likes of Drew Doughty, Erik Karlsson, Oliver Ekman-Larsson, Ryan McDonagh, Ryan Ellis and Nate Schmidt. And that’s just the tip of the iceberg.

If the Devils are going to spend big on a defenseman, they’d be wise to have as much cap space as possible available for a year from now. They’re much more likely to land a top-pair defenseman from that class than they are in a month’s time. There’s also a better chance that the organization will get their worth in the long run from a hypothetical contract of someone like Doughty, Karlsson or Ellis rather than Carlson.

A lot can happen in a year, and I’m sure some of the defensemen I just mentioned won’t make it to free agency. That said, that’s where Ray Shero’s attention should be centered. The Devils will probably be closer to contending and could solidify their spot in the Eastern Conference by making a big splash. If they’re smart about their money this summer, then that’ll put them in a better position to succeed next offseason. And that’s when it will matter most.