This past Monday, Pat Quinn, former NHL player, head coach and general manager passed away in Vancouver at the age of 71.

Quinn’s presence loomed large over the NHL, but he was a particularly large figure in the city of Vancouver where he found some of his greatest success as a head coach and general manager in the league.

Quinn’s tenure in the NHL began as a player, where he made his NHL debut with the Toronto Maple Leafs in 1968. He played two seasons for the Vancouver Canucks, before he was left unprotected in the 1972 expansion draft.

Perhaps, he’s most famous, during his playing career, for delivering a thunderous body check to the Boston Bruins’ superstar, Bobby Orr, during the 1969 playoffs. The hit left Orr knocked out cold, and started a bench clearing brawl in the process. Quinn could receive a major penalty for elbowing for the hit, and would require a police escort out of the building later in the night.

Quinn returned to Vancouver in 1987, and that is where his impact on hockey in Vancouver, and his legacy in the city truly begins to shape. 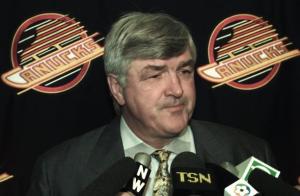 Quinn’s arrival brings success unseen in Vancouver at the time

Quinn was banned from coaching for three seasons by NHL commissioner John Zeigler due to his departure from the Los Angeles Kings. However this ban didn’t keep Quinn from having an impact on the club.

Quinn set out building solid team, trading for Kirk McLean, who would go on to be one of the more popular Canucks in team history, and would trade for many more key pieces of the team that would go on to the Stanley Cup Finals in 1994, including Geoff Courtnall, Greg Adams, Jyrki Lumme, Cliff Ronning and Jeff Brown.

It was then through the draft that Quinn really laid down the plan for the Cup run in ’94.

In the 1988 NHL Entry Draft, Quinn drafted a kid from Medicine Hat with the second overall pick who would go on to be the most popular Canuck in team history. The next year, Quinn drafted a player out of Moscow in the sixth round, 113 overall who would be the team’s first true superstar.

Trevor Linden would go on to be the team’s captain, the heart and soul of the team. The picture of Linden, head on McLean’s shoulder, blood on his sweater, shortly after the final buzzer of game six of the Stanley Cup Finals is legendary.

Quinn’s series of trades and draft picks, along with him getting back behind the bench led to the Canucks becoming a force unseen in the city before. Quinn would win his second Jack Adams trophy in the 1991-92 season.

Ultimately, it was one of his least successful regular season teams that found the most success in Vancouver. Quinn guided a seventh seeded Canucks squad to game seven of the Stanley Cup Finals, where only a goal post kept the Rangers ahead in the deciding game.

Quinn’s legacy will be lasting

As far as Quinn’s place in hockey history goes, he will almost surely be inducted into the Hockey Hall of Fame. Quinn has been ineligible for induction due to the fact that he has be the Hall’s chairman for a number of years, but his coaching record speaks for itself.

Internationally, Quinn coached two Canadian Men’s Olympic squads, winning Canada’s first gold medal in 50 years at the 2002 Salt Lake City games, he won gold in 2004 as Canada’s coach at the World Cup of Hockey, as well as winning gold coaching Canada’s U18 team in 2008 and its World Junior team in 2009.

His presence in Vancouver will not fade.

His former prized draft pick, Trevor Linden is now the President of the Vancouver Canucks, who undoubtedly uses lessons taught by Quinn in running the club today. As well, new head coach Willie Desjardins was one of his assistant coaches on the 2009 World Junior squad.

Quinn was honoured last April by the club with induction into its Ring of Honour, and the team has already said it plans to honour him further.

His image will forever linked to the cup run in 1994, and as long as Trevor Linden is around the hockey club, Quinn’s name will be on the fore front of Canuck fans’ minds.