It’s the best time of the year, or at least the best time of the NHL season, the playoffs! Sixteen teams battle it out for a chance to lift the Stanley Cup– it’s the NHL’s second season. We’re roughly 3 games into the playoffs and Stanley Cup favorites Pittsburgh and Vancouver find themselves in a rough spot, down 3 games to their opponents and on the verge of elimination. What the heck happened?

Pittsburgh vs Philadelphia: 3-0 series lead for the Flyers

This series has been by far the most physical series, anytime you get two teams who really don’t like each other as much as these two you know stuff is going to happen. Even though it’s a team effort during the playoffs, a lot of the blame for the Penguins mess falls squarely on the shoulders of Marc-Andre Fleury. In each of the first 3 games the Penguins came out and grabbed an early lead. In game 1 they were up 3-0, game 2 3-1, and game 3, 3-1 yet in each game they let the Flyers storm back and come out with the victory. The majority of the goals the Flyers have scored are not goals that should go in on a elite level goalie like Fleury, if the Penguins want to get back into this series they need their goalie to stop a puck and keep them in the game. Acquiring a lead but then losing it does no good, especially in the playoffs and against a team like the Flyers who never give up!

The other reasons the Pens find themselves in this hole is the Flyers have been dictating the play of this series. After seeing the WWE type of game Sunday it looked like the Penguins were trying to out tough the Flyers and that’s not going to happen. What happened instead was the Penguins completely lost control and took far too many stupid penalties and shot themselves in the foot, the game yesterday quickly spiraled out of control and the game itself was lost.

Evgeni Malkin- Has anyone even noticed Malkin out there?

The Flyers have done an amazing job of shutting down the Penguins star player and have held him to just 4 assists in the 3 games. Malkin has yet to score and really get his game going in this series, he has not been benefiting the Pens, he’s been hurting them and is a -4 through this series. He doesn’t look like he wants to win.

If the Penguins want to claw their way back into the series and move on they need Malkin to score some goals and be a difference maker!

Claude Giroux and Daniel Briere- Talk about clutch, Briere has been putting the puck in the net and really breaking the back of the Penguins, he’s proving that he is an amazing playoff player. Briere’s scored 4 goals and lead or fuelled the Flyers comebacks. 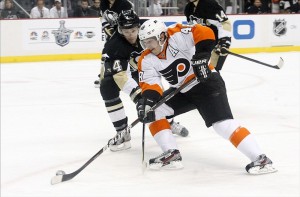 Giroux has been another amazing player for the Flyers. Before the playoffs he said “I don’t just want to be another player, I want to make a difference”. Boy has he made a difference for the Flyers; hits, fights, and goals great leadership from such a young player! He’s racked up 4 goals and 8 points and leads all players in points, goals and assists in the playoffs, the Flyers have a real gem in this kid.

If the Penguins want back in this series they will need Malkin to score a few goals and be more physical and get Fleury to stop some pucks and make key saves at the right time. But at the same time Flyers fans shouldn’t just rest their hat on this series and with Bryzgalov, he too has not been anywhere near as good as the Flyers need him to be! Both these goalies have been off this series and really need to star playing like they should, the one that does make the key saves and steals a game for their team will be the winner.

For the Penguins sake I hope it’s not too late!

Oddly enough the problem with the Canucks has not been the goaltending, Luongo has actually been playing fairly well. It’s the rest of the Canucks who haven’t been playing well, it appears that not having Daniel Sedin in the lineup is taking a bigger effect on the Canucks than most expected. Henrik Sedin looks lost out there without his twin, there must have been a reason why they wanted to go to the same team! The rest of the Canucks forwards have not been able to pick up the play missing from their top player, because of the lack of production the Canucks are on the verge of elimination! Even putting Cody Schnieder in wasn’t enough to spark the Canucks, he played extremely well in game 3 but his teammates didn’t score a goal for him! The worst part for the Canucks is they aren’t going to score a lot of goals on Kings goalie Jonathan Quick, this could be the beginning of the end for the Canucks. The proverbial window is closing!

If the Canucks are swept in 4 games, they will become the first team to win a President’s trophy and then get swept in the first round of the playoffs.

Henrik Sedin and Roberto Luongo- Even though Henrik is badly missing his brother out there, he needs to get over it and start producing for the Canucks. If he plays better his brother can get a chance to get back out there with him. If he doesn’t start scoring he won’t have the opportunity to win a cup or have his

Can Henrik Sedin guide the Canucks back to the Stanley Cup Final? (Icon SMI)

brother back with him. He’s got some great line mates replacing his brother they are more than capable of scoring goals, it’s about time to start scoring again! Luongo had been great for the Canucks in the start of this series and is not the reason for them being behind the 8 ball. Luongo needs to keep playing like he is and the Canucks will have a chance to climb back into their series and make history.

Jonathan Quick- Quick is a major reason why the Kings have manhandled the Canucks in the first 3 games. He’s a great goalie and has been shutting down the door, not allowing rebounds and limiting his opponents to just 2 goals. In the third game he faced 41 shots and stopped all of them earning his first career playoff shutout. If the Kings manage to eliminate the Canucks, the next team they face should be fearful of Quick and be able to score.

Bottom line is the Canucks and Penguins have been out played and out smarted by their opponents, the two teams most fans picked to come out of their respective conferences and face off for the Stanley Cup are on the verge of being eliminated after just 4 games. This proves that the playoffs are a different ball game whatever happened during the season is gone, no matter where teams ranked going into the playoffs it seriously no longer matters. It now comes down to what you do night in and night out. You can’t get by on reputation alone!