Sharks fans, take a deep breath.  It is going to be okay.  The San Jose Sharks may not have won home-ice and arguably ended any chance they had of having it at any point during the playoffs this year, but it does not spell their end. 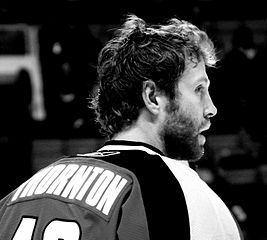 There is no denying the bad history the Sharks and playoffs have shared in the past.  Their twenty year history has been punctuated by disappointment and early exits in late Spring.  Last season featured the embarassing five game series against the St. Louis Blues in which the Sharks lost the last four games of the series after taking the opener in double overtime. While each game was close, minus the combined shutout of Jaroslav Halak and Brian Elliot in game 2, the Sharks never seemed to gain the advantage in the series.  Top scorers Patrick Marleau and Joe Pavelski failed to record a single point and the Sharks sported the lowest goals per game in the playoffs.

But the Sharks team of this year has been forced to find their own identity independent of previous years’ teams.  A blistering start on the back of Patrick Marleau gave way to a stretch of 23 games when they only took two points five times.  Then, the seven game homestand revived the Sharks and sent them skyrocketing back up into the playoffs.  They have had a short memory and streaked their way into position.

Niemi Must Come Up Big

If there is one thing we can always expect from the Vancouver Canucks, it is drama.  Roberto Luongo and Cory Schneider are more entertaining than foreign soap operas at times.  Luongo was just recently the victim of a 7-2 whooping at the hands of the Edmonton Oilers (yes, really) and Schneider is hurt and may not be able to start game one.  Antti Niemi has been a rock all season.  At one point, the backstop for San Jose started 24 straight games.  That streak only ended once the Sharks had clinched a spot in the playoffs.

With the Canucks struggling to score, only nine goals in their final six games, Antti Niemi can really control the pace and score of the series if he plays to the level that we have come to expect of him.

The Sharks MUST Win a Road Game

It goes without saying that San Jose is good at HP Pavilion.  In 24 games, the Sharks earned at least one point in 22 of them.  Unfortunately, the Sharks cannot rely on the Tank to get them deep into the playoffs.  As a six seed, the Sharks must take a game in Vancouver and win their home games.  The Sharks are poor on the road, but one of their three wins against Vancouver was a shootout victory at Rogers Arena.

Patrick Marleau Must Show Up

In past playoff runs, critics of Patrick Marleau have called him streaky and soft when the season is on the line.  He seemed to be on the way to a career year as he blitzed the entire Western Conference in the beginning of the shortened season.  But his streaky ways returned as he and the rest of the Sharks went cold.

The Sharks offense comes from three players.  Only Patrick Marleau, Joe Pavelski and Logan Couture have double digit goals.  The Canucks will isolate these big players with their veteran defensemen.  If Patty can break through, the Sharks can ride his momentum to a series victory.

WITH THAT BEING SAID…

Someone Else MUST Score

Vancouver is going to hit the top lines.  Hard.  Shots will be blocked and the shooters for San Jose will have their work cut out for them.  The Canucks and Sharks tend to get nasty with each other in the playoffs, and the top forwards will have targets on their backs.  Some other player needs to rise to occasion and take the pressure off.  The best bets for this gameplan are Raffi Torres and Brent Burns.

Torres became the new Ryane Clowe with his physical play and hard-nosed attacks.  The trade deadline brought the big man to San Jose and he has quickly become a key to the Sharks lower lines.  Torres makes every rebound look dangerous and is a heavy hitter on the forecheck.  On a team in which hits are rare, the Sharks are 22nd in the league, Torres brings a new element to the San Jose offense.

Brent Burns is listed as a defender.  But when Todd McClellan moved him to forward with Joe Thornton and Joe Pavelski moved down to the third line, the Sharks offense sparked.  Like actual forwards Torres and Pavelski, his goals come from scrappy plays and are not exactly pretty.  Often, someone near the crease ends up on their back.