The San Jose Sharks have played twenty seasons going into this year’s shortened one. In fifteen of those seasons, the Sharks have qualified for the postseason.   But once inside the postseason, the Sharks tend to fold and under perform   They only reached the Conference Finals three times and never qualified past that.  In the NHL, there is genuine chance for any single team to succeed in the postseason so long as they qualify.  Last season’s amazing runs by the 8th seeded Kings and 6th seeded Devils proved that very fact.  But what did those two teams have that these Sharks always seem to lack?

Great Coaching and a Proven System

A glance at the runner-up Devils shows an insight to what great coaching and a proven system can do in postseason play.  New Jersey’s defense suffocated and slowed down opposing teams’ tempo on offense.  Leadership with the hard-working Zach Parise and Hall of Famer to be Martin Brodeur kept the team on the right path.  Marty may have his best years behind him, but key saves and miracle moments in the blue paint carried his team.  Adam Henrique became a break out star as a rookie and David Clarkson brought an aspect of physicality to the forward positions.  The Devils system has always been to disrupt and prevent.  Forechecks and generally outworking opponents paid off and the Devils shocked everyone with wins against Florida, Philadelphia, and heated rival New York, and earned another trip to the Stanley Cup.

Across the country, Los Angeles goalie Jonathan Quick was quickly becoming a superstar overnight.  He reminded us all of a goalie in 2003 that nearly won his Ducks a Cup.  J.S. Giguere had a phenomenal postseason for his club, but fell just short.  The 8 seed blew by the Canucks, Blues, and Coyotes.  LA’s keeper posted mind-numbingly amazing stats in the postseason.  A sub-1.50 GAA and nearly 95% of shots faced were stopped while he led his team to a Cup.  Obviously, he won his first playoff MVP at the conclusion of Game 6.  The Kings also boasted a team that had immense size advantages but were also quick and smart with the puck.  Dustin Brown, Dustin Penner, Dwight King, and Drew Doughty tower above the rest of the league but also employed very quick hands.  Using fast play and crisp passing allowed the Kings to withstand the pesky Devil forecheck.  The forecheck that disrupted all other offenses merely slowed the Kings slightly, and even left some Devils out of position.  Darryl Sutter, a former Shark head coach, turned the under performing team around mid-season and brought a Stanley Cup home.

But these two teams, at least on paper, have nothing more than the Sharks, right?  A solid keeper in net has never been a problem for San Jose to find.  Nabokov and Niemi have definitely held their own with the best of the league.  Leadership cannot possibly be the problem with the powerhouse Joe Thornton at the top line feeding passes to his goal scorers.  Patrick Marleau has led by example for what seems like forever.  Coaches have never seemed to lack the ability to reel off victories and play solid hockey.  And the Pacific Division has been a merry-go-round of three teams always making the postseason and two sitting in the cellar of the West, but those bottom two have never included San Jose.  So where does the problem reside?

What About the X-Factor?

The problem is not something that you can find on the stat sheets.  There is nothing about the talent level of this team that suggests they cannot hoist their own Cup.  But there is something that a spectator can see is missing in the game in San Jose: the X-factor.  The element in sports that all commentators talk about, the X-factor is the part of a game that no amount of hockey sabermetrics can predict.  It is the part of a playoff team in which a player or coach steps up and sets a real example.  It was Jonathan Quick living up to his fitting last name.  It was Peter DeBoer nearly leaving his own bench to shout down John Tortorella after a few dirty hits.  The Sharks came close when Joe Pavelski had his breakout year in the 2010 postseason.  The little guy became an icon, and in that year they made it to the Conference Finals.  What Pavelski showed more than any record or statistic is that the playoffs involve heart.  A player or coach must be able to elevate themselves above what is expected of them; if not, the team will fall to someone else who will.

The Sharks lack bite.  They lack that extra push that gives their team an immovable will to win games when elimination stares them in the face.  There are players all over the league that take the game into their own hands and raise their team from the depths.  Players like Crosby, Giroux, Quick, Stamkos, and many others bring gameplans into a new era.  The Sharks, however, seem more business as usual.  Stick to what is expected and good things will come.  But they will never come in a league like this.  Teams get hot at just the right time and blow by the Sharks.  For the Sharks to succeed in the postseason and lift their own Stanley Cup, they need a Hollywood moment like their rival Kings did last year. 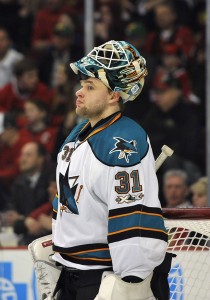