In the conversation to potentially be a top-5 pick when the 2014-2015 season opened, Pavel Zacha’s stock has dipped into the mid-first round. He started the season with much fanfare after being selected 1st overall in the CHL Import Draft by the Sarnia Sting, and was expected to be not only a leader of a young Sarnia team, but also to his native Czech Republic at the World Junior Championships. 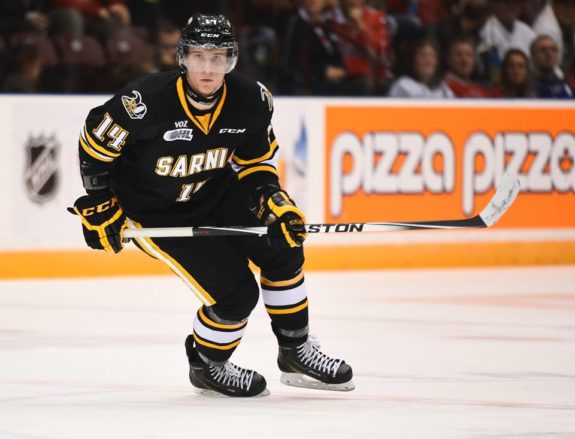 However, he suffered through a roller coaster-type season, as he was able to play in just 37 of the Sting’s 68 regular season games due to a shoulder injury, a pair of suspensions, and the aforementioned World Junior Championships. There was a silver lining, as he put up nearly a point per game with 16 goals and 18 assists and often dominated play with his huge frame and great skating ability. With the risk factor involved, it is a tricky proposition to say a team will gamble on his huge upside with a top 10 pick in the draft. Here are the reasons why teams should (and shouldn’t) take the 6’3″, 210 pound Brno, Czech Republic native with a high first round pick.

The reason Zacha was ranked so highly prior to the season and had scouts drooling over his potential was the elite package of physicality and skill that he brings to the table. While it was not on display all the time in his first season in North America, his skating ability, great shooting skill, and consistent physical presence are among the best in this draft class. Curtis Joe of Elite Prospects details Zacha’s multitude of offensive abilities:

Pavel Zacha is an offensively dynamic centre with the size, speed, and skill to make a significant impact on the game. He can play physical, but is at his best when using his high-end offensive abilities, such as his shot, stickhandling, and foot speed, to generate numbers in the opposition’s end of the ice. All-in-all, Zacha is a lethal weapon that can be depended upon to create, and finish, dangerous scoring chances whenever he is on the ice.

Zacha’s natural position is centre, but his scoring ability and shoot-first mentality may make him a better fit for the wing, as he flourishes when skating with players who can feed him nice passes and give him time to unleash his best weapon – his elite shot. Check out a clip of Zacha’s heavy one-timer here:

He excels when he is freed from the defensive responsibility that comes from playing centre and is allowed to focus on the aspects of his game that make him dominant: his shot, skating ability, and physical advantage over most opponents that allows him to hold on to the puck for long periods of time until he is able to make the best play possible, whether it’s a pass to an open teammate, or a dangerous shot on goal.

The aspect of his game that makes him unique from other highly skilled forwards in this draft is his willingness to get into the dirty areas of the ice and to play the body with abandon. Peter Harling of McKeen’s Hockey explains what makes Zacha such an intimidating physical presence in the offensive zone:

Zacha plays somewhat of a power game using his size to drive to the net and hold off defenders. He plays a physically aggressive style as evident in his two suspensions. Zacha is not afraid to go into the greasy areas and dig out pucks for himself, rather than rely on teammates to do the dirty work for him. A high energy player with an equally high compete level that could graduate to the NHL next season.

If Zacha’s skill level and elite physical tools were without question marks and risk, he would be in the mix for a top-5 pick, alongside star prospects such as Erie Otter Dylan Strome or London Knight Mitch Marner. However, some aspects of Zacha’s game could cause teams selecting inside the top-10 to think twice about taking Zacha.

The first concern is about Zacha’s play without the puck. While he isn’t necessarily a liability on defense, players selected inside the top 10 picks are expected to be stars, and with that territory comes the expectation to deliver good play in your own zone. Zacha has not been called a defensive stalwart by any means, and his lack of instincts when playing without the puck could compound into a bigger problem when faced with tougher, faster competition at the NHL level.

Another issue with Zacha is his occasionally reckless physical play. While his willingness to play physical and toe the line with big hits can give his team the edge on most nights, he can cross the line on occasion. Case in point, he was suspended on two separate incidents this season for illegal hits, like this slew foot against the Niagara IceDogs:

While Zacha is one of the most physically intimidating prospects in this draft with his mix of speed, strength, and skill, he must learn to reign in his game and to learn to play away from the puck with more consistency.

Pavel Zacha, while considered more risky at this point than he was at the beginning of his draft season , is still the same physical specimen that captured scouts’ attentions with a stellar performance as a 15 year old in the 2013 World Under 18 Championships. If he can develop his physical and defensive games, he could be a star in the NHL. After all, a player with these physical attributes and highlight-reel skills don’t come around very often.