The long road of a comeback is never easy and it certainly wasn’t easy for Mark Fraser this past season. He was unemployed from July until November 2 when the New Jersey Devils signed him to an AHL contract. With the Albany Devils he saw action in 18 games (1g-2a-45 PiM) before he was signed to an NHL contract on December 18 and finally made his 2014-15 season debut on January 3.

All in all Fraser saw action in 34 of the final 42 games that New Jersey played and had four assists along with providing a physical presence (55 PiM) that the team lacked until he arrived. The fact that Fraser is even playing hockey again is amazingly remarkable considering it was just over two years ago (May 8, 2013) that he took a slap shot from Milan Lucic above the eye during a playoff game. He split the following season with Toronto and Edmonton but he had been unable to regain his form from before the injury. After a major surgery, and a considerable scar that is still visible, he battled all the way back from the unemployment line to return to the NHL as a regular defenseman.

Mark Fraser had no time to protect himself on this shot: 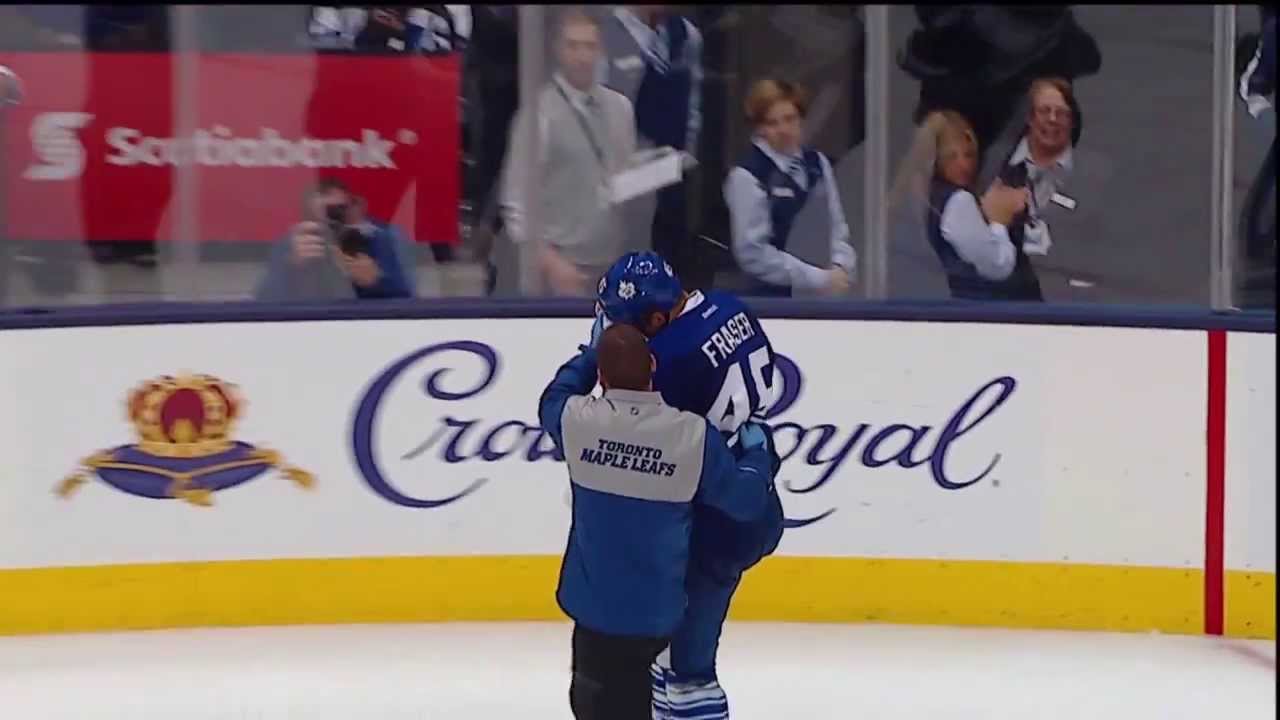 Following the final home game of the New Jersey Devils season The Hockey Writers spoke with Mark Fraser after his post game, off-ice workout to find out a little bit more about what his season was truly like and how it seems that he is back home now that he has returned to the Devils organization.

The Hockey Writers: It was an up-and-down season in New Jersey for the team but you had quite a comeback this season, can you tell us a little about it?

Mark Fraser: From where the guys were at the beginning of the season until now, there was a lot of improvement; we put up a good fight. We actually had some good stretches following the start of the New Year. I think more than anything right now, at least for our team, we have to have some pride looking towards the future. We continue to build; it’s been a tough, long season for this group. It has gotten better as it’s gone along and we’ve learned a few things as a group — playing together and defending each other a lot more — and that’s something that we have to build on going into next year.

Look who stopped by… it's @Strombo of @HockeyNight with Mark Fraser after tonight's win over the Leafs! #NJDevils pic.twitter.com/vg2G9K2gTG

THW: We were kind of more alluding to you personally, after not being in an NHL training camp to signing a contract in November and making your NHL season debut on January 3; you have to feel good about where you are now, right?

MF: Oh, yeah (smiles). For myself, yeah I wasn’t in a training camp this year but I still had that confidence in myself in case anything came along. I was given the opportunity to work myself back up to this level, to this league and hopefully be a contributing factor to some team’s success. I’m proud of myself. It was a hard, humbling road. The first time I was a free agent and I stayed unemployed until November (laughs). But I signed in November and two months later I found myself back in the NHL; I am very proud of myself for doing that. Hopefully turning some heads or changing the opinions of some of my critics; but then again there was (and is) plenty of room for me to grow. I’ve always been told no one is a complete player and I’m just happy to be with an organization like this that is allowing me to contribute the way I can.

Mark Fraser wasted no time making his presence felt in his return to the NHL: 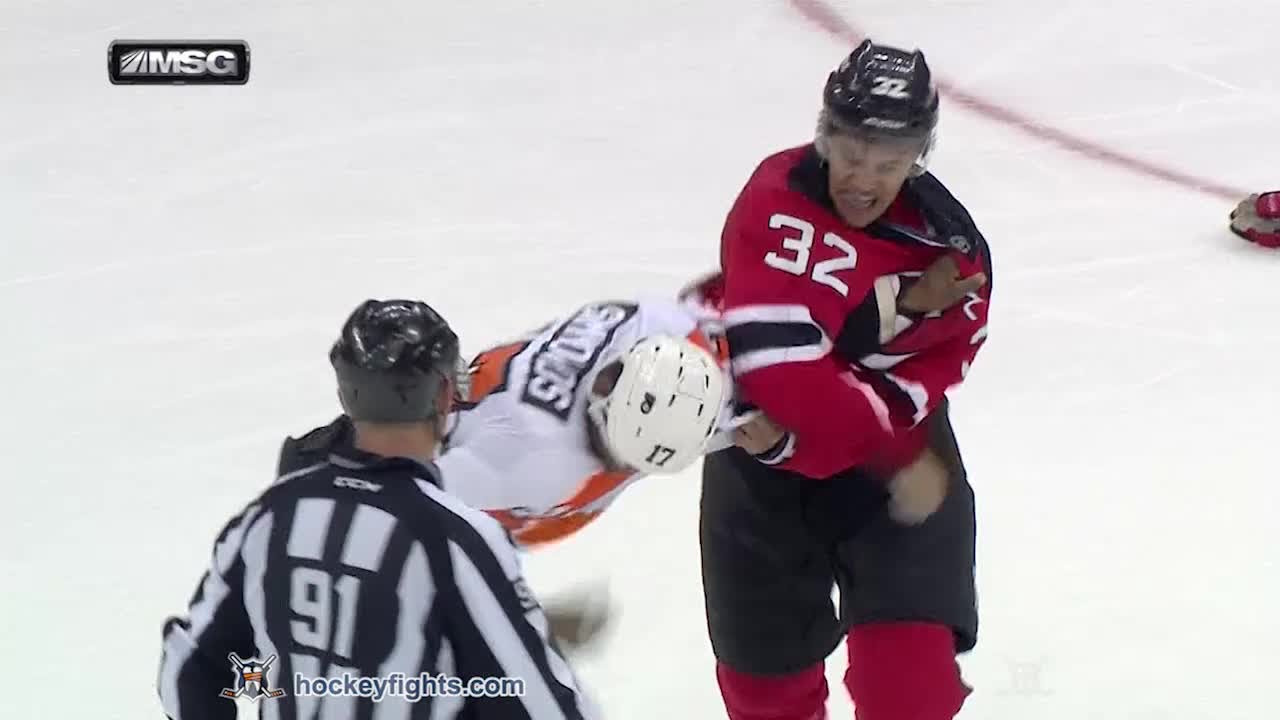 THW: This had to be the perfect destination for you with all of the people you know here, players and staff, right?

MF: Exactly. These are the guys that taught me how to play the game the way I do. For the couple of years that I was away, no doubt I learned some more things about my style and myself. But it’s the defensive attitude here that helped me grow into the player I am today and whether it’s Lou Lamoriello, Scotty Stevens, Tommy (Albelin) or Adam (Oates) — all of them I’ve had before, so it made it a perfect situation for me to come into this season.

THW: What is it like to have a legendary Hall-of-Fame defenseman like Scott Stevens coaching you on a daily basis?

MF: Yeah, we have three Hall-of-Famers standing behind our bench, I think it’s pretty rare that that happens; everyone here is fortunate for that exact reason. Scotty is great, he was such a dominating force when he played…I sometimes wonder if it’s hard for him to teach us the game (because of) the way he played it or saw it. He was so dominant; so dominant. It wasn’t just on the defensive side either; he was a great puck mover as well and earlier in his career he was definitely a two-way player. I know he takes great pride in this organization and the physical style of play; and that’s something that I can bring (to the team). It’s all about where to position my feet, or distancing myself from a guy or playing stern and hard in front of the net…whatever it is that he has to say, it’s going to be merited and valued a lot in this room and I think we are so fortunate to have him here.

THW: MSG Network’s John MacLean picked some team awards on the broadcast prior to the final home game and you were one of the guys he selected as most improved; what do you think about that?

MF: That’s a great compliment (smiling) coming from him — a guy who’s played a ton of hockey and seen a ton of hockey. Johnny’s opinion definitely means a lot to me and that’s a nice compliment coming from him. Where I’m at in my career I just feeling more comfortable out there; I’ve gained a lot of confidence over the years in my game and it’s nice to have coaches and a staff that has faith and confidence in me. They allow me to just do what I do, which largely is on the defensive end and the physical side of things. Given the opportunity to help out or jump in on a play…sometimes I may just be a decoy (laughs) but that’s fine. They’ve instilled that confidence in me to allow my game to grow.

THW: Would you like to be back in New Jersey next season?

MF: I hope so. There’s no surprise that this is a comfortable setting for me here, a lot of familiar faces and definitely a place I consider home. I would love to be back.