The best way to build a championship contending team is from the back out. Kings General Manager Dean Lombardi has made no reservations in choosing top defensive prospects in the drafts he has managed, even to the point of making questionable decisions like drafting Thomas Hickey with the number four overall pick in the 2007 draft. The Kings have/have had such strong depth defensively that the high first round pick, who is currently playing in the NHL for the New York Islanders, slipped along the depth chart and forced off a crowded Kings rosters in 2013.

Other defensemen, like Hickey, have had that same fate such as Andrew Campbell and recently traded Colin Miller. All three were expendable in a deep Kings system. Lombardi has done a great job at acquiring defensemen through the draft, free agency, or via trade and it is important to know what’s currently going on with the Kings defensive prospects and who could be forcing another player out through competition.

Last week, it was discussed that after the draft and free agency, the Kings needed a defenseman. Brayden McNabb, Jeff Schultz, and Jamie McBain all have a chance to insert themselves into the line-up as defensemen with the most NHL experience, but even further down the depth charts, the Kings still possess a strong stock of talented young defenseman.

After McNabb, McBain, and Schultz, Who is next?

Of all the prospects, Vincent LoVerde is of the most senior in the Kings depth chart. With no NHL experience, the Monarch’s captain had spent the last four years with the organization playing two years in Ontario with the Reign in the ECHL and has played the last two in Manchester.

LoVerde was set to become a restricted free agent this July, but signed a two-year contract extension with the Kings earlier this month. LoVerde played in all 19 Manchester playoff games last season and finished with 10 points and a plus-13 rating.

Derek Forbort, the former 2010 first-round draft pick, is expected to see some time in the NHL this upcoming year. While Forbort is not guaranteed any games because he is waiver exempt and the Kings can recall and send him down as they please, it should be a given that his call-up late last year and his experience in the Kings development system was a sign that the coaching staff and management will give him every chance they can to see him play at the NHL level sometime soon.

Other players like Kevin Gravel played a big part in the hoisting of the Calder Cup for the Monarchs last season. Gravel, a fifth round draft pick in 2010, had a big year in his development with the Monarchs playing in 58 regular season games and ending the regular season with 15 points and plus-15 rating. In the playoffs, Gravel was held goalless but tallied five assists totaling for five points in the AHL playoffs and finished with a plus-2 rating in 19 playoff games. In June of this year, the Kings signed Gravel to a two-year deal and he could be battling a two-day older Forbort in terms of making the NHL out of training camp.

There are players, younger than both Forbort and Gravel, who are also progressing towards professional development and are signed by the Kings. Nick Ebert is a great story as the last player to be picked in the seventh round of the 2012 draft. Scouts and executives questioned his development as Ebert had a rough sophomore year with his OHL team, the Windsor Spitfire and dropped his first-round projection from the year before.

The year following his selection, Ebert was traded in the OHL to the Guelph Storm where he would win a Memorial Cup along with other Kings prospects Zach Leslie and Justin Auger. Ebert played 45 games with the Monarchs as a 20-year-old last season and played in just two playoff games, but the right-handed defenseman is fast, offensively gifted, and has a knack for getting the puck out of the zone quickly. 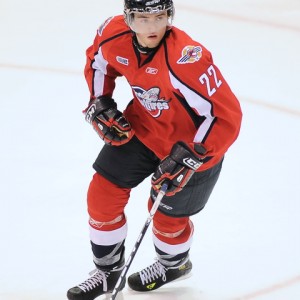 As mentioned before, Ebert won the Memorial Cup with the Guelph Storm with another Kings prospect signed to entry-level contract in Zach Leslie. Leslie is 21 years old and possesses a lot of the same qualities that Ebert does. He is fast, has good vision, and has a lot of offensive upside to his game. Leslie signed a three-year entry-level contract with the Kings in October last year and is looking to make the next step into professional hockey for the first time in his career.

Kurtis MacDermid is another young prospect that will look to play his first year of professional hockey with either the Ontario Reign or Manchester Monarchs next season. In September of 2012, following the Kings first Stanley Cup victory, the Kings invited MacDermid to the development camp and signed the free agent to a three-year entry-level contract. The 21 year old has beefed up his size from a 6-3 18-year-old to now a 6-5 frame and 210 lbs. body. MacDermid has spent the last four seasons in the OHL splitting time between the Owen Sound Attack and Erie Otters. MacDermid is signed until the end of 2016-2017.

Alex Roach, 22, is the last prospect above the age of 20 to keep an eye on in the Kings organization. Signed through the end of next year, Roach has had a bumpy start to his professional career with the Kings.

Roach began the 2013-2014 season in the ECHL with the Ontario Reign. Roach was then reassigned to the WHL for the season in which Roach’s WHL team, the Calgary Hitmen, lost in the first round of the WHL playoffs. Roach then headed back to Ontario after his major junior eligibility expired. In 60 regular season games with the Reign last year, Roach recorded 16 points, 51 PIM, and a plus-16 rating. Roach also appeared in 19 playoff games for the Reign and tallied six points and 28 PIM before the Reign lost in the Conference Finals.

The Youngest Defensemen Signed by the Kings Organization

Two of the youngest and more recent signings are defensive prospects Alex Lintuniemi and Erik Cernak. It has been noted that the Kings have a knack for finding great prospects in the second round and these two are no exception.

Lintuniemi was the last pick of the second round pick in 2014 and signed a three-year entry-level contract with the Kings in April. At just 19 years old, Lintuniemi played 126 games in the OHL with the Ottawa 67’s and six playoff games before playing four games in the AHL with the Monarchs. Lintuniemi is a young, two-way defenseman, but still has a long ways to go before seeing time in the NHL as he is looking to start his first full year of professional hockey come September/October with the Ontario Reign.

Cernak is another young defenseman that is a right-handed shot and knows how to use his reach and size. The young Slovakian was drafted in the second round this year with the number 43 pick. The signing gives the Kings a few options as far as his development in the system plays out. With Cernak signing an entry-level contract with the Kings, the Kings can have Cernak play in juniors, play in the AHL with Ontario, or have him stay in Europe. The latter seems unlikely, as there is a lot of potential in the defensive prospect that has already seen success on an international level at a young age.

There is no way of telling who will make the team come opening night and which defensive prospects will impress most in training camp. And given the current situation of the Kings, the illustrious stockpile of promising defensive prospects may not give them the top-four defenseman they need, but it is assuring knowing that there is a wave of young players signed with the Kings, being developed the right way, and can have a chance to prove their worth to the organization.