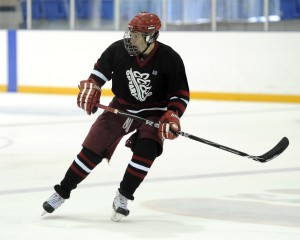 Injuries can carry with them dark and heavy clouds. Clouds saturated with potential dowsing drops that can quickly extinguish the bright fire of future on-ice heroes.The story of Slater Koekkoek is young, but already complex. While those clouds above him have never been so populated, his luminous potential has never raged with greater ferocity.

Nearly two years ago the Tampa Bay Lightning made Koekkoek the tenth overall selection in the 2012 NHL Entry Draft. Outsiders may have been a bit surprised at the time, but those making the decisions for the Lightning were very pleased.

“He was absolutely the best player on our list,” said Tampa Bay’s director of amateur scouting Al Murray. “He’s a terrific skater. He’s going to be a point producer as well as a real solid defensive player. The only reason he might have fallen on some lists is because of his injury.”

During the course of a hockey season, teams often find themselves dealing with injuries. Inevitably every team will have to handle its share of bumps and bruises along the way. Players have to deal with their own bumps and bruises as well. Sometimes, as has been the case for Koekkoek, the bug focuses its attention on a single target.

Koekkoek would only see action in 26 games during his draft eligible 2011-2012 season. He got off to a hot statistical start, recording five goals and 13 assists for the OHL’s Peterborough Petes before succumbing to a left shoulder injury that would require season ending surgery.

“I think that I worked hard and went through rehab in the gym to get ready for the Combine as best I could,” Koekkoek told NHL.com. “But I take learning experiences from it. You’ll go through some ups and downs, and it’s how you deal with it.

While surgery is never a minor event, it didn’t deter the Lightning from selecting him in the first round. Nor did it dampen the spirits of those who thought so highly of Koekkoek’s potential. Little did they know they would be witnesses to not only a single adventurous season, but a trilogy of thrill rides with two powerful tales remaining.

Act one came with a silver lining of becoming an NHL prospect for Koekkoek. The second act offered no such consolation. Following a summer of rehab, Koekkoek was back in action for Peterborough. Skating in 40 games with the Petes, he amassed six goals and 22 assists to go along with 28 penalty minutes. Though the offensive numbers were a positive, his minus-26 rating offered a look under the hood of a beater that had nothing left to offer. Koekkoek was traded to the Windsor Spitfires in a move that greatly improved the outlook of his season, if only for a moment.

Two games into his Windsor career, the tone of the second act dramatically changed. Once again, Koekkoek would suffer an injury to his left shoulder that would require season ending surgery. What had started out as a hearty return had fizzled into disappointment for the young blue liner. Despite a second injury, the Tampa Bay Lightning believed in Koekkoek enough to sign him to an entry-level contract. Surely the injury bug had taken enough runs at Koekkoek by now.

Act three was welcomed with many positive vibes. Koekkoek appeared in both prospect and training camp with the Lightning. Looking fully healthy and ready to go, the team assigned him to Windsor of the OHL for another go at a full season of healthy hockey. It appeared the Lightning and Koekkoek would get their wish. In 62 games as captain of the Spitfires, Koekkoek netted 15 goales and added 38 assists. His plus/minus rating also improved to an incredible plus-44. Needless to say, Koekkoek was in the midst of a terrific final OHL season.

As it turned out, the final act also called for a dramatic tone shift. The hockey gods cruelly requested another shoulder injury be bestowed on Koekkoek, though they spared his left shoulder a pain filled hat-trick. Much to the dismay of the Lightning and Koekkoek, his season would be cut short by shoulder surgery for the third consecutive season.

It would be easy to overlook the progress Koekkoek has made both on and off the ice given the conclusion of his last three seasons. It would also be a mistake.

Windsor head coach Bob Boughner (beginning at 3:03 in the video) spoke very highly of Slater Koekkoek’s development prior to his shoulder injury this season.

“Amazing. He always had the natural ability and the skating and everything. We’ve instituted a lot of structure in his game and instilled a lot of confidence in him. You know in Windsor we made sure he didn’t have to take the puck coast to coast every time. It’s defense first, and that’s how he’s going to be a good NHL player. I think Tampa’s pretty happy with his development.”

Koekkoek is a quality skater with good hands and a big shot. These qualities helped him post career highs in goals (15), assists (38) and points (53) in the 2013-2014 season. Not only were his on-ice abilites shining through, but his leadership qualities were as well. He was named captain in Windsor, a role he previously held in Peterborough. His most recent shoulder injury came in a fight with Saginaw’s Jeremiah Addison following his hit on Windsor’s Brody Milne, a display of the leadership Koekkoek consistently provides as noted by Windsor alternate captain Remy Giftopoulos.

“It happened so fast,” Giftopoulos said. “I tried to jump in, but (Koekkoek’s) a great leader and captain and he dropped his mitts. As a team, we appreciate that.”

Although his season was again cut short due to injury, Koekkoek had done more than enough to deserve recognition for his play.

“Obviously, not only is he our best player, but I truly believe he’s the best two-way defenceman in league at this point,” Spitfires head coach Bob Boughner said.

High praise from his coach would not be the only confirmation headed Koekkoek’s way. The Windsor Spitfires named him team MVP. The OHL coaches selected him as the second best offensive defenseman and the third best defensive defenseman in the Western Conference. He was a finalist for the Red Tilson Trophy as the OHL’s most outstanding player and the Max Kaminsky Trophy as defenceman of the year. Koekkoek was also named an OHL First Team All-Star.

Injuries can certainly rain on the parade of any player. It remains true that Koekkoek hasn’t gotten through an entire season without surgery on a shoulder since his rookie OHL 2010-2011 campaign. It also remains true that he has both the on and off-ice qualities that every NHL desires in their defensemen. The injuries are concerning, but not enough to overshadow the tremendous growth in his game. The story of Slater Koekkoek is complex, but the Tampa Bay Lightning are enjoying the read so far.