PHILADELPHIA — Brayden Schenn and Vladimir Tarasenko scored and Jordan Binnington stopped 25 shots in his first NHL start to lead the St. Louis Blues past the Philadelphia Flyers 3-0 on Monday night in a listless game between two of the worst teams in the league.

The Blues’ win gave them 38 points and moved them past Los Angeles out of last place in the Western Conference. Only Ottawa has fewer points than the Flyers (36) in the East after Philadelphia’s seventh straight loss. Both teams fired their coaches this season.

Schenn scored his ninth goal of the season on a rebound off the Carter Hart’s pads 41 seconds into the second period for the 1-0 lead. Tarasenko scored midway through the third to become the 20th active player to score against 30 other teams while playing for one franchise. 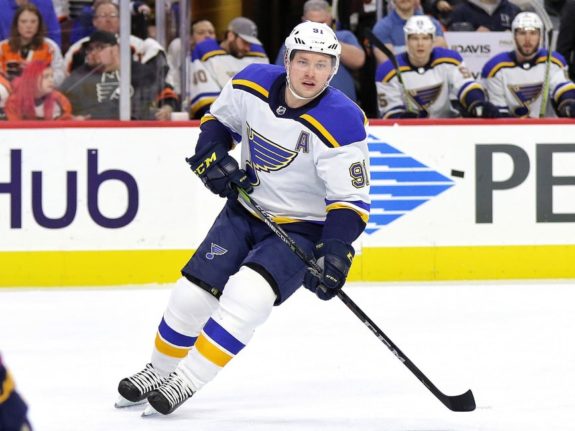 Binnington, a third-round pick in the 2011 draft, made the lead stand and needed to make only eight saves in the third. David Perron scored an empty-netter in the final minutes.

The 25-year-old Binnington had played just two games in mop-up duty this season behind Jake Allen. He was sent to the minors in December to keep fresh and earned three wins with a shutout to earn AHL player of the week honours. He was called up — and got the call to start against the hapless Flyers.

“It’s whole different feel,” Binnington said at morning skate. “You can do your own routines and know you’re starting the game off and you can dictate the whole game.”

Binnington wasn’t challenged much in a half-empty Wells Fargo Center. Once of the NHL’s loudest and craziest buildings, the crowds have dwindled with each defeat and the few fans that showed on Monday mostly sat on their hands and booed.

The exception came when Gritty — their popular, googily-eyed mascot — wore a blindfold “Bird Box” style and kicked a Nerf football into the stands on a field-goal attempt as part of the “Cody Parkey Challenge.” The Chicago Bears kicker had a field goal blocked in the final seconds that gave the Philadelphia Eagles a 16-15 upset win in an NFC wild-card playoff win. Flyers fans roared, breaking into the “Fly! Eagles! Fly!” fight song when Parkey’s missed kick was shown on the video screen.

This is how sad the season has become for the Flyers — the fans can only cheer for other team’s highlights. They used to root for Schenn when he starred for the Flyers for six seasons. He scored 59 points in 2015-16 and 55 points the next season before he was traded for the Blues. The Flyers had another reminder of better days on the Blues bench: coach Craig Berube led the Flyers to the playoffs in 2014 and was fired the following the season. The Flyers fired his successor, Dave Hakstol, last month and have failed to win a playoff series since 2012.

The Flyers have scored only 12 goals over their seven-game losing streak, their longest losing streak since they went 0-5-5 over November-December last season.