With the Winter Olympics coming up in one month, the hockey world seems to be focused on the USA and Canada and how their teams will respond. Canada is the defending gold medalists and Team USA is Canada’s main rival and biggest threat. However, is Team USA Canada’s biggest threat and is Canada even the biggest threat in the Olympic tournament?

In my opinion, no.

Although their team hasn’t been formally announced, Team Sweden looks strong and will win the gold in Sochi. Now before I get complaints from Canadians and American hockey fans, let me explain why Sweden will capture gold.

Canada may have a high octane offense and a lot of star power, but the goaltending situation in Canada is, well, a little shaky. At the same time, Sweden’s goaltending is pretty much all set and could be one of the best teams in the Olympics between the pipes.

The favorites to make the Canadian squad at goaltender are Roberto Luongo, Braden Holtby, and Carey Price. Luongo is a bit of a head case in net. He can be good, yes, but, more often than not, he tends to wilt under pressure. Although Luongo didn’t lose a game for Canada in the 2010 Winter Olympics, he very nearly let the US take gold after a very late Zach Parise goal sent the game into overtime.

In fact, since that time, Luongo has been dreadful in high pressure games. Just take a look at his stats in the playoffs since the 2010 Winter Olympics.

Luongo’s 2011 numbers are a bit deceiving. Luongo absolutely faltered in the 2011 Stanley Cup Finals and imploded after the Canucks held a 2-0 series edge over the Boston Bruins. Luongo will probably not be the starter for Canada, but could very well be the number two goalie for the Canadians.

The probable starter for Team Canada is the Montreal Canadiens’ Carey Price. While Price is having a pretty good year and playing the best hockey of his career, his lack of international experience is disconcerting. The last time Price played in an international competition was back in 2006-07, before he started his NHL career. Price dominated the 2007  World Juniors as he earned the MVP and clinched Canada’s 13th title. The Olympics are completely different than the World Juniors and the competition is a lot better.

Meanwhile in Sweden, Sweden’s unabashed number one goalie is the New York Rangers’ Henrik Lundqvist. After a shaky start to the season, Lundqvist has finally found his footing. The Rangers have struggled this season, but Lundqvist is hardly to blame for that and he is still one of the best goalies in the NHL.

Mix of Youth and Veterans 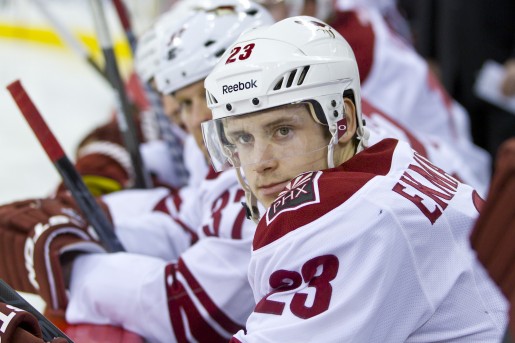 In order to have a successful hockey team, you must have a nice mix of youth and veteran leadership and Sweden has those in spades.

Sweden is going to be full of young exciting players like Alexander Steen, Gabriel Landeskog, and Oliver Ekman-Larsson just to name a few. The Sedin twins and Henrik Zetterberg are expected to be back to help the new guys along.

Alexander Steen is currently third in the NHL in goals and Larsson leads a strong defensive corps (more on that later). Mix that with the NHL and Olympic experience of Zetterberg and the Sedins, and you may have an unstoppable team.

Even if the Swedes don’t win the gold or even medal, the experience of the veterans will rub off on the youngsters and it will set them up for a good showing at PyeongChang in 2018, especially with the Swedish juniors coming up through the ranks.

Sweden has always known how to play it safe, after all they manufactured Volvo, a very safe automobile. So, it’s no surprise that Sweden has a strong defense around them.

Barring some unforeseen error in judgement, the Swedish defensive corps will consist of Erik Karlsson, Ekman-Larsson, Victor Hedman, Niklas Kronwall, Jonas Brodin, Niklas Hjalmarsson, and Tobias Enstrom. That is a pretty good defensive squad if you ask me. Erik Karlsson is a former Norris Trophy winner and Jonas Brodin was considered for the Calder Trophy last season.

Ekman-Larsson is still young at 22, but he is quickly becoming a top defenseman in the NHL. Since the start of last season, Ekman-Larsson has scored more points than Drew Doughty and Kimmo Timonen, both of whom were Olympians in 2010.

With Lundqvist in net, and without the Ranger defense, the Swedes could just ride their defense and netminding to a gold medal in Sochi. They may not have the offensive firepower that Canada or the host country Russia has, but, if the old adage is correct, defense wins championships and Sweden has a great defensive squad.

Canada is no slouch either on defense, but the big question is if P.K. Subban is selected for the team. It really shouldn’t be a question considering he is the reigning Norris Trophy winner and still among one of the best defensemen in the game. Canada is going to make a huge mistake if they omit Subban from it’s team.

Although Nicklas Lidstrom is no longer playing, his defensive spirit still lives on in this young Swedish corps.

The last time the Olympics were played on a larger, international ice sheet, the Swedish won the gold medal at the Turin in 2006.

Most of the players that could be on the Swedish team grew up on the larger ice sheets and are more accustomed to it than say Canadians or the Americans. That’s not to say that the Canadians or Americans can’t play on larger ice, but teams like Sweden and Finland have more experience and it could be a slight advantage.

While the Swedish team hasn’t been officially announced, I still believe the makeup and the style will help propel Sweden to the gold medal in Sochi.