Watching the Predators work their way through a set list of conference rivals is a bit like watching the prettiest girl at the cotillion razor out a swath through a crowd of male admirers. You know what’s coming and there is a part of  you that wants to turn away from the proverbial carnage of so many young men laid low by the combination of brute force, cunning, and sheer damned cussed refusal to lay down and let popular wisdom have its way.  And yet…  and yet there’s a part of you -the same part that wants to see the kid from The Ring crawl out of your TV*-  that wants to see the surprise that shouldn’t be a surprise at all in the form of a beatdown by the numbers.

Who Are Those Guys?

Claiming dominance this season so far is a newcomer, Craig Smith, and a relative newcomer to a club culture that places a premium on longevity with an ardor that is hard to find outside of small communities in Maine.  Sergei Kostitsyn, the troubled dark horse who was part of a trade with Montreal that included a half-dozen beaver pelts and a gross of cut-out Nashville Star CDs proved to be one of many sharp transactions that Poile got right last year.  His eye for talent and Coach Trotz’ ability to bring out the pro in anyone willing to put in the work is not, as some would assume, the puppet mastery of a Gepetto on the Island of Misfit Toys so much as it’s a gift for finding the raw talent in players who got lost in the shuffle somewhere else.

Nashville’s talent is often undersung except in instances where individual players are showcased outside of regular NHL play.  Ask any hockey lover who isn’t a part of the Predators’ fan base and the first, sometimes the only thing they can mention is Shea Weber’s Lil’ Abner-like upper body strength.  To suggest that it won’t be a set piece in this year’s coverage of the All Star Games is to tip one’s hand that the red carpet coverage got to be too much and everyone in the room needed the blessed brain floss of back to back episodes of “The Big Bang Theory” after Jeremy Roenick asked Dustin Byfuglien to rap.**

Jerred Smithson is Keyser Soze. There. I said it. 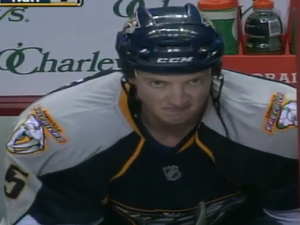 actually doing.  At this point in the season, those lists are usually made up of O6 teams*** and a few heavy hitters from the northeast.    Nashville is seventh in the league, sixth in the Western Conference, and fourth in the Central Division.  Did they get there because the club is sending a Scout troop onto the ice six Brownies at a time to take on Rick Nash or is it because there is the right mix of talent wearing Nashville  laundry?****

As of this writing, they are trailing the team just ahead of them by two points.  Two points.  All it takes is an algebraic breakdown of mind over netminder plus the right or wrong combination of people on the ice for Nashville to leapfrog the Red, Black, and Blue in the standings.

If they thought about it, okay, if they thought a little harder about it, they would see this as a nervous time for pundits and prognositcators.  This is the time of the year when stats guys will glance at their bulletin boards, trying to remember if they had takeout Chinese last night or the night before and then they will remember that NHL “History Will Be Made” spot featuring that sun belt team scoring a game winning goal against Anaheim.  The pieces will start to fall into place.  A moment later there will be the tippity-tappitying of laptops across North America as talking heads and hockey scribes with begin to seek out the best exchange rate for Loonies and Toonies and a good place to get a decent cup of coffee in that Menkensian Sahara of the Bozarts where the pucks fly like bullets while the nearest TimBit is half a continent away.

*Cool factoid: The little girl in The Ring is the same actress who provided the voice for Lilo in “Lilo and Stitch”.

**…and never came back.  I lied.  We watched “Dharma and Greg” until the red carpet nonsense was over.

**** Tootoo and Klein have been known to give asswhuppins with every order of Thin Mints .