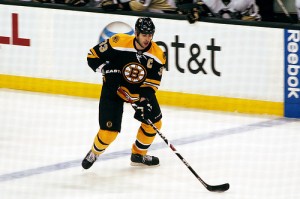 Approximately 25 minutes after Ryan Getzlaf scored the game-winning goal, the final score was still showing on the scoreboard at the TD Garden.

This isn’t anything new, in fact, it happens after every game. But it felt different on Thursday.

The ice was clean, the arena was empty, and after a quick turnaround in an otherwise solid game for the Bruins, they were seeing their playoff hopes slowly dwindle. With 39 seconds left to play, the Bruins blew their one-goal lead when Corey Perry tipped the game-tying goal past Tuukka Rask. Then, after a successful and quite impressive penalty kill with Zdeno Chara off the ice, the Ducks scored 31 seconds later to take the game.

It all happened pretty quickly and now, 30 minutes after the game had ended it was still there: Bruins 2, Ducks 3, 1:51 left in Period 4, overtime.

The Bruins never came right out and said it, but the look on their faces expressed it. They knew this one got away. They knew that in a stretch where every single game matters, that this loss – another extra point loss – stings worst. Chris Kelly was one of those players who looked stunned, his eyes glazed over as he faced down into a see a tape recorders searching for an answer. He didn’t really have one. None of the players did. It’s been that kind of a season for the Bruins.

“Obviously disappointed in the result,” said Kelly. “I thought we played well, I thought we defended well, and our power play did a great job getting two goals. It’s disappointing.”

The Bruins are now 11-13 after regulation concludes – nine of those losses have come in the shootout.  The amount of points that the Bruins have left on the table would have been the answer to the team’s playoff woes. Instead, the Bruins are left with yet another disappointing game where they thought they played well enough to win.

There’s this aura around the Bruins where everyone thinks they’ll make the playoffs and be fine, regardless of how many games are left and where they are in the standings. It’s habitual. For the past seven seasons, that’s just what happened and with the majority of the team still intact from the most successful of those seasons, the expectation is that it happens again.

But they keep falling short. What makes you think this won’t be the story when the regular season ends?

Thursday night should have been a step in the right direction. To be fair, it sort of was. The Bruins played a heavy game and an Anaheim team, that is very, very good, in check. The Bruins controlled the play for most of the game and got some seriously good goaltending from Rask. Even with a blue line depleted and a defensive corps hurting so much that Zach Trotman was playing big minutes, the Bruins looked good.

The mistakes eventually show up, though. However big or small that they are, the flaws in the Bruins game keep coming up. They either can’t hold a lead or can’t finish – sometimes it’s both. The Bruins can’t get out of their own way or out of their own heads. Sometimes they look soft and afraid to shoot, while other times they play like a team who could upset a team or two in the postseason. This whole season has been the most mixed bag year in Peter Chiarelli’s tenure with the team. They’re not good, but they’re not bad, but who knows.

The injuries don’t help and the man-games lost can’t be replaced. This is true, but is it enough to justify the inconsistencies? Did the Bruins just not ever get used to playing with one another? No. That’s not something that can be justified especially when other teams do it just fine. The 2014-15 season is just one where a lot of players took a little step backwards instead striding ahead.

It’s difficult to realize that this is the President’s Trophy team from last season, playing for the final wildcard spot in the Eastern Conference that they can’t seem to hold onto with the roster they have. That’s something nobody around the Bruins had expected.

They ended up shutting off the scoreboard at the TD Garden about 35 minutes after the end of the game. The night’s over and the result once again leaves the Bruins without any type of reasonable explanation.