Everybody has a role. Sometimes that role changes rapidly and the shift of expectations doesn’t follow quite as quickly. The Wild’s Kyle Brodziak has spent large parts of the last two season as the fans’ punching bag. But is the ire of fans in the State of Hockey deserved for a player whose role has shifted in a major way during his five-year tenure in Minnesota?

Maybe. He was, in the Wild’s leanest offensive times, a top six forward, scoring 22 goals and 44 points in the 2011-12 campaign. The year before, while in a similar role, he had 16 goals and 37 points. Respectable production from a player who ideally doesn’t slot into your top line. So why did he become a maligned player on offense last season when he scored eight goals and 24 points?

At 30-years old his production is probably just starting to lag and that’s not unexpected. But the combined lagging production with being somewhat snakebit all season led to a lot of disappointment in the center. Anyone who watched the games can probably give you the play-by-play on a number of opportunities where Brodziak missed a wide open net. (Not to mention he’s the only player I can think of that had a a major slump, which he broke by not scoring a goal. The slump ended with Brodziak being awarded a goal after being tripped on a breakaway toward an empty net.) Those struggles are reflected in his shooting percentage last year, which was a career-low 7% (with the exception of his 10-game campaign in his rookie season).

Of Shooting% and Projected Production

Brodziak’s career shooting percentage — excluding last season and including his goalless rookie campaign — is 10.7%. If he hit that average last season he would have had 12.37 goals — let’s round that down to 12. For a player with his usage — which we’ll discuss — 12 goals is a big step up from eight.

12 goals would have had him tied for fifth most on the team with Dany Heatley and Charlie Coyle. That would also put him one ahead of Mikko Koivu. The opportunities were there for Brodziak to contribute more on offense. That’s certainly part of the fan ire. A former 20-goal scorer missing yawning nets is always going to set fans off and he should score those goals, no matter what his role on the team is. That he would have passed Koivu or tied Coyle is maybe more an indictment of the team’s historical lack of offensive production.

We can make the case that his shooting percentage will move back toward his career mean and compare it to the rest of the team, but his shooting percentage wasn’t there and a team that ranked 24th in goals last season needs a player like Brodziak to hit 12 goals. He finished with eight goals and 16 assists for 24 points, the exact pace he was on the season before in the lockout shortened season. His goal total was on pace for 16 in a full 82-game season, but the points were identical. We can make the case with shooting percentage, but that’s two straight seasons of lagging production.

However his lagging totals aren’t the only story here. He could have scored more, but his production was hindered by the amount of penalty kill time he was taking on and his overall usage.

There are a few ways we can look at Brodziak’s usage last season. Let’s start here: Among players who played 900+ minutes — a good deal of playing time — no one had a worse relative Zone Start Percentage (ZS%) at -22.84%. His overall ZS% of 33.5% is 12th among all players, all positions, who were on the ice for at least 1,000 corsi events. Next in line for worst zone starts? His linemate Matt Cooke.

That ZS% is one of the worst he’s had in his career, making it a tough season for a player who is used to defensive deployments. Not only was he getting deployed more than ever in the defensive zone, he was getting the fewest offensive zone starts of his career. Take a look at the chart below via Hockey Analysis. 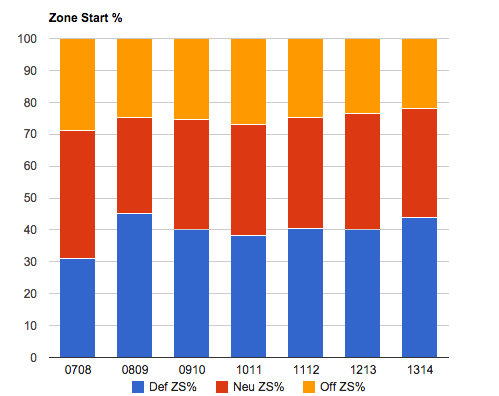 That’s in large part because Brodziak was a go-to guy for shut-down situations. His Quality of Competition (relative corsi) was 1.184. The only player on the team who faced tougher competition was Ryan Suter.

Brodziak was also the go-to guy for penalty kill. Brodziak was on the ice for 49.7% of all of the Wild’s penalty kill time in games he played in. (Brodziak played 81 games last season and was benched for the final game of the season.)

Again, with this in consideration, his Corsi For % and Goals For % aren’t terrible. He’s not an offensive powerhouse, but he’s posting reasonable CF% and GF% numbers at 44.2% (-4.16% relative) and 48.3% (-6.12% relative) respectively. Not where you want him to be, but not miserable considering he only had 33.5% of his zone starts in the offensive zone.

Those zone starts and the amount of PK time he’s taking not only means that he’s being put in a tough position constantly, but he’s absorbing bad zone starts for the top lines. Having a 33.5% ZS% means that the top two lines are able to take better zone starts that put scoring players in favorable positions more often. Playing half of the team’s PK time means that PK-able players like Parise and Koivu can be saved for situations that better utilize their assets.

If the fourth line was a liability and had to have a little more protection, then you’re moving Zach Parise, Jason Pominville, and Mikko Koivu’s ZS% down and preventing them from getting the opportunities they are getting. I would argue that there’s significant evidence that the presence of Brodziak (and Cooke as well) meant that players like Pominville and Parise scored more than they would have with a less competent third/fourth line pairing and that some of the young players wouldn’t have had the space to grow that they did.

Are There Better Options?

One of the arguments against Brodziak is that despite everything outlined above the team could find a better fourth line center for this season.

Here’s a usage chart from Hockey Abstract. You can see that while some players (who played fewer minutes) had worse ZS%, none of these projected centers faced tougher competition last season. Hardly any of them even played as many minutes as Brodziak. (Size of circle is TOI and shading is CF% ranging from red at the low end to blue.) 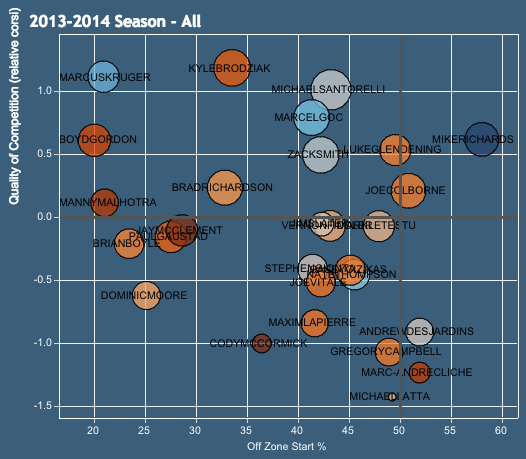 Here’s another way of looking at this group. Below you see a graph of ZS% plotted against points per 60 minutes of 5-on-5 play (P/60) for last season. Brodziak is the red dot. He’s, again, far from elite, falling about in the middle of the pack and pretty close to the trendline. His P/60 is just slightly below what you’d hope based on his ZS% within this group. Again, he’s got a lousy ZS%, not the worst around, but lousy and his offensive production is in the lower middle part of the group. 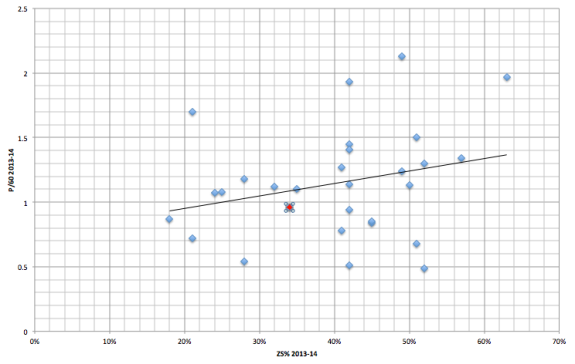 So what is this proving? That Brodziak is about in the middle of the pack among this group of (more or less) peers. He’s producing, based on what fourth line centers across the league did last year, about where you’d expect if not slightly below. But Brodziak has upside, an ability to play up the lineup and he’s proven that with better ZS% and some power play time that he could be a productive member of the offense if it’s required of him. Will he ever hit his 2011-12 numbers? Probably not. That’s probably his ceiling and it’s behind him.

However, it’s possible that our expectations from a player that was once a 20-goal scorer haven’t adjusted to recognize what his value is. He’s not a fourth line center with enormous offensive potential like a Mike Richards (who will play up the lineup for the Kings), but he’s a player that won’t hurt the team when he takes a lot of minutes with a heavy emphasis on defensive zone starts and penalty kill. His presence not only makes a fourth line that doesn’t need to be sheltered or have their minutes limited when the game is close, but provides shelter for what is arguably the best top six group the Wild have ever had.