The 2015-16 season will be the Tampa Bay Lightning’s 20th in the National Hockey League.

It’s true. The team was established in 1992 and, well, do the math from there; here’s the part where you feel old. You recall the Bolts’ first moment of real relevance in drafting supposed-stud Vincent Lecavalier.

But we digress. The Lightning are in their 20th season and the team would like you to know that they’re here to stay.

The signs are everywhere. You don’t even need to look that hard for the news items: they’re right there in the headlines. Because, again, the Lightning would very much like you to know that the team has developed roots in central Florida.

Earlier last month, they kicked off their season with a three-day event that culminated with the free Fan Fest, when fans could watch their favourites scrimmage, take photos with the Prince of Wales Trophy and, if they had season tickets, treated to an interview with general manager Steve Yzerman and head coach Jon Cooper. The team is investing in its sled hockey program in order to grow the sport. Also this: they’re creating a health and wellness neighborhood around their arena, which you can read about here, here and here.

The Team Is Great

The Lightning would also like you to know that the team is feeling great, because the players are feeling great. The triplets line of Ondrej Palat, Tyler Johnson and Nikita Kucherov seeks to build on success. Jonathan Drouin, meanwhile, is feeling better in body, spirit and, if you read the text and beyond the headline, you’ll learn that the 20-year-old winger will have ample opportunity to earn a bigger role with the team this season. There is still the matter of Tampa Bay’s franchise player, still very much the captain of this team it turns out. If we are to believe the headlines, then maybe Grantland is right and that Tampa 1) will win a Stanley Cup this season and 2) should at least be the favorite to win a Cup over the next five years.

If the Lightning are not going anywhere, it’s because they’ve won the lottery twice over. In 2008, they won the draft lottery they were favored in to retain the right to pick first and, eventually, get their new franchise player in Steven Stamkos. I’ve discussed in detail the case of the Lightning captain already, but let’s just say that if the Lightning isn’t going anywhere, it’s because they know they already have their franchise player, for whom, it must be said, money will not be an object.

The Lightning also won the ownership lottery, when Jeff Vinik signed the dotted line to purchase the franchise in 2010—though you could argue Vinik is the real winner here, managing to acquire the best buy in NHL history for a (relatively) paltry $93 million. Tampa is far from a perfect hockey market, as evidenced by USA Hockey’s decision to eliminate the team from contention for the host city of the 2018 World Junior Hockey Championships, but the team’s owner is doing his part. 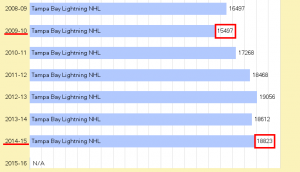 He’s committed to expanding the growth of youth hockey in the region, to the tune of $6 million over the next five years. In the years since Vinik took ownership, the team has found a good GM in Yzerman and the new prototypical head coach in Cooper. Oh and the team’s attendance, while traditionally rarely a force, has jumped from 15,497 and 21st to 18,823 and ninth this past season.

And if the Lightning are not going anywhere, it’s maybe also because of the following: they are bringing poutine to Tampa at their Amalie Arena now. Of course they’re staying.

I write about the Tampa Bay Lightning on THW, because I like a good team that wins hockey games. (Duh.) I played hockey as a defenseman’s defenseman (think: a poor man’s Craig Rivet) for 12 years but I don’t play, because I am not young anymore.

If you need me, I’m most likely eating poutine somewhere.