The Edmonton Oilers are about to draft Connor McDavid, and while there is a lot of excitement around him, McDavid isn’t a goalie nor a defenceman, two positions the Oilers are still looking to improve. There have been numerous trade proposals kicking around, some involve the Oilers other first round pick, and even prospect Leon Draisaitl. Most of those trade scenarios have come via Twitter, so it’s best not to take them too seriously. The problem with the Oilers making a trade for a goalie is that the ones available don’t have much of a track record, and giving up something for an unproven commodity could prove costly. It might be worth the risk, but I would much rather take the risk on a free agent. Let’s explore those possible trade options and I’ll explain why. 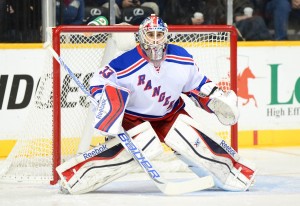 Any team with Henrik Lundqvist on their roster has little need for another potential number one goalie sitting on the bench. Cam Talbot has proven himself to be a very serviceable guy, going 21-9-4, with a 2.21 goals against average, a .926 save percentage, and five shutouts this past season. Those are good numbers. But the 27-year old has played in just 57 regular season NHL games. That’s an extremely small sample size, and his strong season came behind a President’s Trophy winning team. He’s got a year left on his contract, and the Rangers are likely looking to move him. But I caution they may be asking too much.

I heard this rumor pop up last week, and I laughed it off. I really don’t see why the Ducks would part with Gibson. They have a young, cheap defence core, and a deep forward group. It’s not as though they’re in cap trouble and need assets. Obviously, you can never say never, but I just don’t see it happening. And even if they do offer up Gibson via trade, they would demand a lot for him. Gibson is a very good goalie prospect, but he’s got 26 NHL games under his belt, with career NHL totals of .919 SP% and a 2.45 GAA. He’s just 21, and has a ton of room to grow. I would love to see him develop with the young Oilers. But they would have to give up a lot for him, and he comes with no guarantees.

Similar to the situation in New York, Jones plays behind a star number one goalie in Jonathan Quick, and he won’t be seeing much of the ice anytime soon. The 25-year old has appeared in 34 NHL games, posting a .923 SP% and 1.99 GAA. If the Kings decide to trade Jones, they would likely want that first round pick involved, and possibly even a prospect, and again, that’s just a lot to give up for such an unproven guy.

The Ottawa Senators will be trading a goalie, we just don’t know which one yet. Of the two, I would prefer to have Craig Anderson, who is actually a proven commodity. But he’s 34-years old, and he strikes me as someone who would be best served to play with a contending team. Can anyone really suggest the Oilers will be legitimate contenders in the next two years? They might be, I’m not going to be negative about it, but acquiring a veteran goalie doesn’t make sense for this team right now, not for the price they would have to pay for him.

As for Lehner, who is recovering from a concussion and has injury concerns, well he’s in the same boat as the other three goalies I mentioned. However, at 23-years old, he’s still so young, and has more NHL experience (86 games) than the other guys. But he’s struggled with consistency, and wasn’t able to claim the starters role when given the opportunity. So the question is, what are you willing to give up for Lehner? And will he be worth the cost?

Jimmy Howard’s situation is an interesting one, because while he’s not confirmed to be available, you have to wonder about the team’s confidence in him after Petr Mrazek took over the starting job this past season. There may have been issues with his coach, who is no longer there, so perhaps he will get a fresh opportunity to prove himself again. Let’s say for sake of argument that he is on the trading block, I’d still pass. He’s 31, has a big contract ($5.3 million AAV), and he has yet to really step forward as an elite goalie in this league. Is there any evidence he can become that in Edmonton? It’s possible, but the Wings would demand a lot for him, even though his current trade value is low.

My choice for the Oilers goalie situation? Free agent Michal Neuvirth. He was traded from the Buffalo Sabres this season because he was playing too well. He’s 27-years old, in his prime, and because of his limited experience, he wouldn’t be asking for a bloated salary. Neuvirth has played in 168 regular season NHL games, posting a .912 SP% and a 2.73 GAA with seven shutouts. He’s got a little more experience than the other guys, and do you know what he’s going to cost in terms of assets? Nothing. All the Oilers have to do is offer him a contract.

When looking at numbers, ages, and experience, can you really say that any of the trade options are better than free agent Neuvirth? Can you say with certainty that getting any one of those guys would be worth what you’re giving up? No, because we don’t know how they will perform in Edmonton. So why not go with the unknown that isn’t going to cost you anything. Seems like a no-brainer to me.