For both the San Jose Sharks and the St. Louis Blues, the formula is fairly straightforward in their Western Conference Quarterfinals series.

Score three goals. Over the past 28 games of the regular season, the Sharks scored two or less fifteen times, the Blues eleven. Within the confines of tight checking, collapsing defenses and the pressures of the playoffs, coupled with offenses that struggled for large portions of the year and excellent netminding on both sides, three would seem to be the magic number.

Don’t lose the special teams battles. Each club had polar opposite strengths during the year: the Sharks were the league’s second-best with the man advantage at 21.1%; the Blues finished a pedestrian 19th at 16.7%. Conversely, St. Louis was 7th on the penalty kill at 85.8%, whereas San Jose ranked a lowly 29th at 76.9%.

Score first. Momentum can make or break a series. Furthermore, the two clubs ranked 5th and 6th in the league in winning percentage after scoring first. 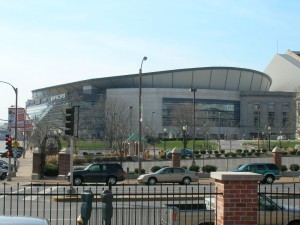 San Jose accomplished all three tasks Thursday night, overcoming Patrick Berglund’s two goals and a raucous sellout crowd of 19,333 at the Scottrade Center to defeat the Blues 3-2 in double overtime, 3-2. With the win, the Sharks grabbed the 1-0 series lead, wresting the home ice advantage away from the Blues.

“It was nice to win this game in St. Louis,” St. Louis goaltender Antti Niemi said, after stopping 40 of 42 shots, including 14 in the first overtime period. “Now we have to take care of [Game] 2.” Speaking on behalf of his team, Blues’ center Patrik Berglund said, “”We believe we can beat these guys. “We’ll regroup and see what we can do better.”

The game started out with Niemi making solid saves on consecutive chances by Alex Pietrangelo streaking down the wing and, after a turnover in the San Jose zone, a Vladmir Sobotka blast from the left circle. After that, it settled into a defensive struggle, with neither team breaking through. After one period, shots favored St. Louis 7-4, but the game was scoreless.

In the second period, the Sharks drew first blood. While on the power play, Dan Boyle skated into the mid-slot and blasted the puck on net. Martin Havlat, who struggled through an injury-plagued season scoring a career-low seven goals, tipped it home for the 1-0 lead. Despite thirteen shots in the period, the Blues were unable to solve Niemi and as the period ended, San Jose remained in front, 1-0. Commenting on his seeming to lose the puck at certain times during the St. Louis onslaught, Niemi said, “I did a couple of times but fortunately they couldn’t find it and score.”

The third period opened up for both clubs, with the Blues pressing early for the tying marker. The effort paid off, as just 54 seconds into the period, Alexander Steen fed Kevin Shattenkirk who wristed it quickly on net from the point. Patrick Berglund got his stick on the puck and redirected it past Niemi, tying the game. At the 7:28 mark and while on the power play, Berglund struck again, finding open space in the slot and firing the puck behind Niemi for the 2-1 lead, sending the crowd into a paroxysm of joy.

One of the intangibles of this series, however, is the collective playoff experience of the Sharks. Despite going down near the midpoint of the third period on the road, San Jose remained composed. “There was no panic on the bench, that’s for sure,” forward Ryane Clowe said. “You don’t want to get too uptight and panicky and think it’s not going to happen.” Sure enough, with just 5:16 left in the game, Tommy Wingels streaked down the right boards, slid the puck to the front of the net and the unlikely Andrew Desjardins, who scored all of four goals this season, one-timed it home, tying the score. Evaluating the play of the Desjardins-Wingels-Daniel Winnik line, McLellan said, “The 13-14 minutes that they played for us was very valuable. They played hard, played smart. Desi was really good in the faceoff circle. Tommy got some power play time and played a really important role on that line. When you get those two young guys playing together with a veteran like Daniel Winnik, you have a fourth line you can trust or third line, whatever they might be.” The third period ended with the teams knotted up, 2-2.

After a scoreless first overtime that saw the Blues outshoot the Sharks 14-8, the game remained tied 2-2, as Antti Niemi stole the show. “That’s one of the best games he has played all year, especially the overtime,” said Sharks’ defenseman Dan Boyle. “It seemed like we just couldn’t the puck out of our end. They kept grinding and grinding on us.”

And then, 3:34 into the second overtime, Martin Havlat did what does best: come through in the clutch. Havlat parked himself in the high slot as the teams battled for the puck along the boards. Ryan Clowe poked it to Logan Couture, who slid the puck perfectly to Havlat. The winger wound and fired the one-timer past Blues netminder Jaroslav Halak for the game winner. When asked about Martin Havlat’s reputation as a big-game player, San Jose head coach Todd McLellan replied, “He has that reputation. That’s one of the reasons why he was acquired. He lived up to it tonight.”

“It was a great feeling,” Havlat said. “My first thought was that it was time to get some rest.”

Referring to Havlat’s winner, Blues head coach Ken Hitchcock said, “There was a lot of errors on the goal. It’s unfortunate, there were a lot of errors on that goal. We had it cleared 3-4 times, didn’t win a race to the boards either. So [it was] disappointing. We played a very good hockey game, but that’s the playoffs.” Looking forward to Saturday, Hitchcock observed philosophically, “This is one game. We played good, so did they. We weren’t in awe of anything.”

Game two is scheduled for 7:30 PM EST. Three may well be the lucky number yet again.