When Daniel Alfredsson was 37-years-old, he lead the Ottawa Senators in scoring with 71 points, despite only playing 70 games that year. Nothing less was expected of Ottawa’s longest serving captain; there was never a season in his 18-year career that Alfredsson faced doubt of whether or not he could still keep up with the increasingly younger talent.

In his final season, Alfredsson lead the Detroit Red Wings in scoring. After a short-lived playoff appearance, it was time to call it quits. He played until his back issues made him question whether he could compete at the highest level.

To some degree, Alfredsson went out on top.

Sadly, the same will not be said about Chris Phillips. The 37-year-old has been slowing down for a while now.

It was one year ago that Phillips signed a two-year contract extension (worth $5 million) with Ottawa. At the time, it was questionable for the team to extend the longevity of Phillips’ time as a Senator, but now that the dust has settled, it’s looking more and more like a huge mistake.

The past year has shown that Phillips simply can’t keep up with the pace of play at the NHL level anymore. His skating has met an all-time low and his puck moving ability is lacking, to say the least. The one quality we’ve always been able to sing Phillips’ praise for has been his leadership abilities, but when he got passed up for captaincy by a younger, more talented Erik Karlsson, his role was questioned.

And what’s to say about his influence on the team when he was a healthy scratch numerous times halfway through the season?

When Phillips was injured nearing the end of the season, the Senators went 21-5-3 down the stretch to miraculously launch themselves into a playoff spot. All while one of their candidates for the team’s captaincy was watching from above in the press box.

With eight defensemen already on the roster, Phillips wasted no time this season in proving he was clearly at the bottom of the pile.

His possession numbers were horrid, even when he was miscast on the first pairing alongside Karlsson for countless games. Not even a Norris-winning defenseman could fix the undeniable liability Phillips had become.

Take a look for yourself. When Phillips is on the ice, the team suffers, and suffers big time. 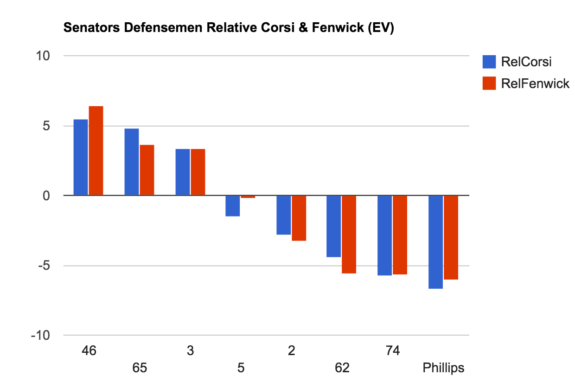 And not that offence has ever been demanded from the long-time Senators defenseman, but in a league where scoring is becoming more scarce by the year, and with every single other teammate outshining him, Phillips is looking much more expendable. 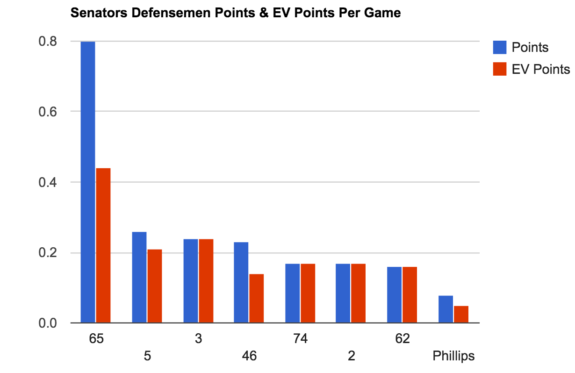 Plainly, there’s just no more space to have Phillips around.

With the current setup, Cody Ceci and Patrick Wiercioch have solidified themselves on the second pairing behind Karlsson and Marc Methot. That leaves two spots up for grabs between Jared Cowen, Mark Borowiecki, Eric Gryba and of course, Phillips.

Not to mention the rise of AHL talent.

Senators prospect Chris Wideman just received the Eddie Shore Award for top defenseman in the AHL, and if that’s not a clear sign he needs to be playing in the NHL next season, then I don’t know what is.

Though 22-year-old Swede Fredrik Claesson had a bit of a setback year after his impressive 2013-14 season, there are big expectations for him to make a solid case to be an NHL defenseman come the fall.

Without taking in account possible trades and free agent signings, if you add Wideman and Claesson to the running for a spot on the Senators’ roster, that’s a total of six players competing for the third pairing.

Without giving Phillips recognition for simply being a veteran on the team, this undoubtedly makes him one of the few odd men out.

Chris Phillips is a franchise player and will always be one of the great Ottawa Senators. There will be a conversation on whether he should have his number retired, and though the conclusion will be to not raise a banner to the rafters, there will still be a conversation.

He has played a franchise record 1179 games in a Senators jersey and helped the team to 14 playoff appearances in his 17 NHL seasons.

But it’s time. And it’s been time for a couple years now.

If he refuses to hang up the skates and truly wants to come back for another season, maybe the Senators need to realize where this young and extremely promising team is heading. After seeing Daniel Alfredsson and Jason Spezza ship off elsewhere to continue their careers with other teams, it’d be a shame to see a third long-time Senator in a different uniform.