In relationships, you never want to meet the ‘other woman’ face-to-face; it’s awkward, potentially dangerous, and there’s too many unknowns involved.  Thankfully, in this hockey relationship, I’ve got you covered Washington Capitals fans.  Come Thursday, April 30th, you will not be uncertain about the ‘other goalie’ when the Capitals meet the New York Rangers (NYR) at Madison Square Garden.  I have reviewed all eight goals against (GA) Henrik Lundqvist in the first round of the playoffs, and while I have not discovered a ground breaking secret; I will help you understand how Lundqvist has been beaten and at the very least, give you ammunition to scream at your television.  The graphic below shows each GA shot location and where it beat Lundqvist on net. 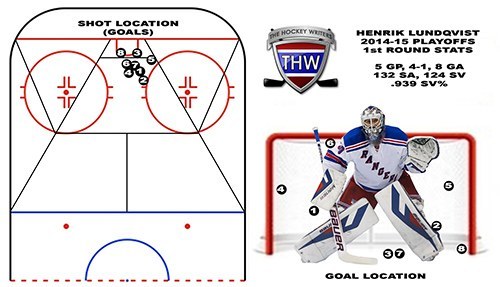 Goal Description:  The lone goal came in the second period, Lundqvist fought off the initial shot, but traffic in the crease prevented him from securing the puck, he gave up a juicy rebound to the eventual goal scorer.

Keys to the goal:  Shot with traffic in the goalie crease, disrupted Lundqvist’s rhythm, and quickly pounced on the rebound.

Goal Description:  Lundqvist lost sight of the puck that bounced off bodies in front of the goalie crease, he butterfly slid the wrong direction, and got beat opposite side.

Keys to the goal:  Traffic in front, crashed the net from initial shot.

Goal Description:  Lundqvist stopped a semi-breakaway with the help of his defense, rebound bounced to the top of the crease and a crashing Sidney Crosby scored.

Keys to the goal:  Created scoring chance against the Rangers defense, and crashed the net.

Goal Description:  Puck passed from the right circle to just above the top of the goalie crease, Crosby deflected it past Lundqvist.

Keys to the goal:  Puck held in the offensive zone by the defense, pass funneled to the net, and got the goalie moving laterally.

Goal Description:  Lundqvist stopped a wrap around chance from behind the net, the rebound went to a streaking Chris Kunitz and he beat Lundqvist glove side.

Keys to the goal:  Controlled the puck below the circles, and crashed the net.

Goal Description:  Shot from the blue line with traffic in front of Lundqvist.  Puck bounced off traffic, Patric Hornqvist found the loose puck and put it in the back of the net.

Keys to the goal:  Shot with congestion in front of the goalie crease, and crashed the net.

Goal Description:  Shot from the blue line with traffic in front of Lundqvist.  Hornqvist deflected the initial shot near the top of the crease and it slid under Lundqvist.

Keys to the goal:  Shot with congestion in front of crease, and deflected puck.

Goal Description:  Play started from behind the net, puck was sent through the goalie crease where crashing Penguins were colliding.  The puck bounced off Nick Spaling and snuck past Lundqvist’s left skate.

Keys to the goal:  Control the puck below the circles, and crash the net.

Not re-inventing the wheel

Like I stated at the top, I have not stumbled upon earth shattering information here.  As you’ve seen and read from the breakdown, the best way to beat Lundqvist (or any goalie for that matter) is to take away his vision and space, change the direction of the puck, and make him move laterally.  The Capitals can’t strive for the fancy goals, but rather put pucks on net from everywhere, especially when there’s traffic in front of the goalie, and create second chance opportunities.  The Penguins scored 50% of their goals (4 of 8) from rebound opportunities in the first round series against Lundqvist.  The Capitals need to go back to the basics and heed the old adage, there’s no such thing as a bad shot on net.

What do you think will give the Capitals the best chance to beat Lundqvist and the Rangers?  Start-up a conversation below.