TORONTO — John Tavares, Auston Matthews and Frederik Gauthier scored three quick goals in the second period and the Toronto Maple Leafs held off the Buffalo Sabres for a 5-3 win on Monday night.

Tyler Ennis had the eventual winner in Toronto’s (38-20-4) four-goal second period and Kasperi Kapanen added some insurance with a short-handed, unassisted goal in the third period.

Matthews is the first player in Maple Leafs history to score 30-plus goals in the first three seasons of his NHL career.

Frederik Andersen made 30 saves for his 100th win for Toronto. 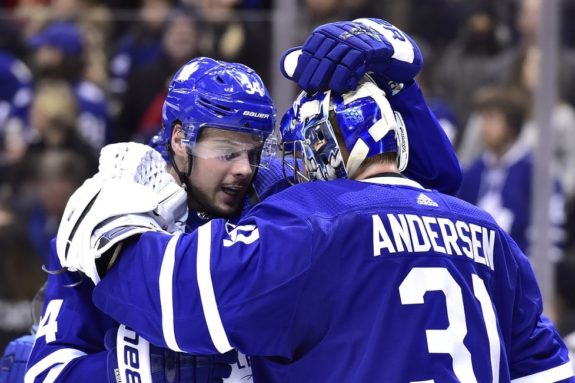 Jack Eichel scored twice for Buffalo (29-25-8), while Sam Reinhart added a goal as the Sabres’ playoff hopes took another hit.

Carter Hutton started in net for Buffalo, stopping 9-of-12 shots in 25:52 of work. Linus Ullmark replaced Hutton in net, turning aside 19-of-21 shots.

Maple Leafs general manager Kyle Dubas was fairly quiet on the NHL’s trade deadline, only sending Par Lindholm to the Winnipeg Jets for Nic Petan in a swap of forwards. Toronto’s big move came on Jan. 29 when the Leafs acquired veteran defenceman Jake Muzzin in a trade with the Los Angeles Kings.

Buffalo also swung a deal with Winnipeg on Monday, sending defenceman Nathan Beaulieu to the Jets for a sixth-round pick in the 2019 NHL draft.

The Sabres had acquired veteran defenceman Brandon Montour from the Anaheim Ducks on Sunday for blue-liner Brendan Guhle and a first-round selection in this summer’s draft. Montour had not joined the team in time for Monday’s game in Toronto.

Eichel buried a wrist shot from the slot past Andersen with 51.5 seconds left in the first period for his 20th goal of the season. The goal came just 7.5 seconds into a penalty for too many men on the ice that Tavares served for the Leafs.

The Maple Leafs were lucky to escape the first down just 1-0. Buffalo outshot the hosts 16-6 as Toronto’s defence looked disorganized and sluggish for most of the period.

That changed in the second period when Toronto reeled off three quick goals in just over two minutes.

Tavares redirected a slapshot from Muzzin past Hutton to tie the game 1-1 at the 3:48 mark of the period, nine seconds after a Sabres’ penalty expired. 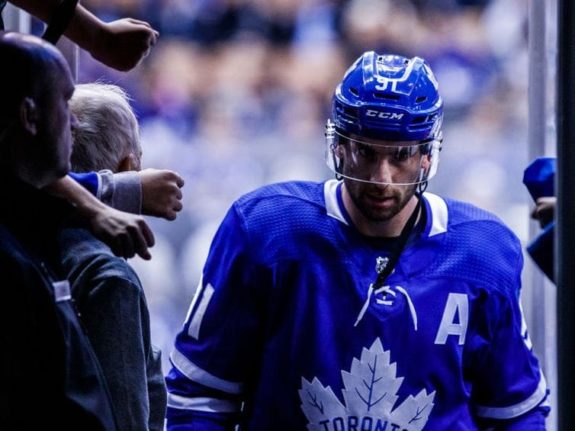 Matthews then gave Toronto its first lead of the game while the announcer was still giving details on Tavares’s goal. Matthews’s shot from behind the net had rebounded off Hutton and deflected off the skates of a Sabres defenceman right back to the Maple Leafs’ forward. He made no mistake, swatting it into the net for a 2-1 lead.

Gauthier piled on just 28 seconds later, taking a pass from Jake Gardiner and, with his back to the net, slipping a backhand past Hutton. That ended the Sabres’ goalie’s night, with Ullmark coming on in relief.

It was Gardiner’s 200th career assist.

Ennis made it 4-1 a little over seven minutes later when Gauthier threaded a pass between two Buffalo defencemen, giving Ennis a breakaway from the blue-line. He made the most of the opportunity, putting the puck over Ullmark’s shoulder.

The Sabres answered back with 2:35  left in the second when Reinhart completed a tic-tac-toe passing play while Buffalo held the man advantage.

Eichel scored nine seconds into the third period, cutting Toronto’s lead to 4-3 and sucking the air out of Scotiabank Arena.

Andersen kept the Leafs in the game during a late power play, sliding across his crease to stop Rasmus Dahlin’s attempt at a tap-in and then smothering the rebound with his glove.

When play restarted Kapanen got a breakaway for his 19th goal of the season and some insurance for Toronto with 2:18 left in the game.

Notes: Seventeen-time Grammy Award winner Sting was in attendance, receiving a Maple Leafs jersey with his name on it in the first period. … Several players on the Maple Leafs had rainbow-coloured tape on their sticks as part of the team’s You Can Play initiative that is dedicated to the eradication of homophobia in sports.