A total of ten goals were scored in what has been the most offensive All-American Prospects Game since 2015. Team Langenbrunner (Team White) came out on top against Leopold (Team Blue), but as it is in any prospect showcase, it was about the individuals — and, boy, were there a lot of standouts that showed USA Hockey is producing top-end talent. 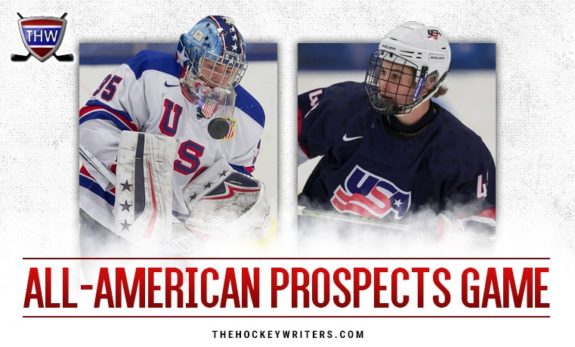 Marshall Warren is a Dynamic Defender

It didn’t take the defenseman from New York long to stand out not only on Team White but both squads. What makes Warren particularly noteworthy was how he played so many different roles and kept showing a new side of him on every play he was involved in.

At first, Warren was a physical beast with high hockey sense. He was in lanes blocking shots and passes with timely positioning. Much like a solid goalie would be, Warren was always in position before the puck came his way — he didn’t have to dive to block the shot or stretch to lift a stick. He was in the right place, right time far too often for coincidence.

“‘My coach on the Junior Bruins at that time, he was like, ‘Maybe we should switch you to defense because you can see the ice well and you are a good skater. You have good vision.’ So, I ended up switching to D and I really enjoyed it. It was a good transition,'” said Warren when talking about his path to the National Team Development Program.

As the game wore on, he started to loosen up as Team White became increasingly dominant in the offensive zone. He got comfortable and soon, too, was dominating the offensive zone. He went from executing crisp passes and getting assists on two goals to taking the puck in on his own, circling the net, and getting chances of his own. He fought as well in his opponent’s zone as he did his own, and that got him an empty net goal.

Teammate Matt Boldy was given the honor of ‘Player of the Game’ with two goals and an assist, but Warren could have very well taken home the award as well. His three points (1-2) and versatility will make him an asset to the Harvard Crimson, who he is set to play for next season in 2019-20. Not to mention, he will now be remembered in the AAPG record book as one of the players tied for a game-high of three points.

Four goalies got, more or less, twenty minutes in net apiece, but one stood out among the pack.

Spencer Knight was the starter for Team White and garnered a lot of attention since he was the only one of the four to have taken part in the Summer Showcase earlier in the year. And that attention was worth it. He had the highest save percentage, though he also fielded the fewest shots. Regardless, in terms of positioning, he was excellent. He was the Knight we know: calm and well-positioned. He, much like Warren, was always in the right place at the right time.

Knight’s only goal against was one that struck his weakness: his stick-side. During warm-ups, it was evident Knight was weak on that side. He sometimes lacked shoulder movement altogether to stop it, other times he just couldn’t move his shoulder fast enough to get it. And in the game, that was exposed.

Aside from that, however, Knight was as solid as expected. Does this help his case to reach the World Junior Championship as a 17-year-old? For the sake of fans and spectators, hopefully, since he’s a real treat to watch.

Although Knight stood out the most, two other names garner attention all their own thanks to their own impressive performances.

Cameron Rowe, a former tandem partner of Knight’s and the former starter for the NTDP U-17 team, also held his own in the net as he boasted the second highest SV% while on Team Blue. But more importantly than that, he made no costly mistakes. On both goals against, Rowe was either stretched out by the offense because of his defense’s poor positioning or he was just beat on a clean, nice shot. It was one of those goals where it’s placed so perfectly and timed just right that a goalie couldn’t possibly butterfly and get their shoulder up that high at the same time.

Dustin Wolf, who has a very appropriate name for a USA Hockey player thanks to one of Herb Brooks’ best quotes, was also impressive in his own regard. He faced more shots than any other goalie with 21. He made 18 saves on those 21, which isn’t stellar in the stat category, but something to keep in mind is that, historically, goalies had save percentages in the .700s-.800s more often than not in recent years. In any of the previous three years, Wolf’s numbers would have one of the best.

To no surprise, Jack Hughes put on a show, but it wasn’t for long.

Hughes was quiet most of the night, with one or two nice moves on a shift once a period; his extended shift in the third was most memorable. He danced down the slot, weaved his way out to the circles and completed a spin-o-rama no-look pass. The crowd in Xcel went wild. Then he got the puck again a while later on the same shift and completed yet another no-look pass. The crowd gasped.

As we saw in the Summer Showcase, Hughes has a remarkable skill set, but he often gets shut down or doesn’t stand out. It’s not to say he’s not good enough to stand out consistently, but I’d like to see more from him more often. And it’s not even just about making a spectacular move, it’s about controlling the play and being a dominant player without always making insane plays.

Illusive and Dangerous in St. Paul

Through and through, a major takeaway from the game was the illusive and sneaky nature most of the players had. Something I look for that I often see separates the “goods” from the “greats” is the positioning of hips and toes. A good player can give away their next move by the angle and position of their hips and toes — a great player doesn’t. Most of these prospects fell under the “great” category.

Hughes, Alex Turcotte — a projected top-5 draft pick — and Grant Silianoff were most notable at this. For each of them, their choice to pass or shoot was up in the air until it was already sauced across the ice or was whirling towards the goal. Coincidentally, these players combined for four points.

Overall, the AAPG was one to remember. The players in this game were no joke; many are going to be first and second round picks, and you could tell that by the tempo and way that they played. Whatever USA Hockey is doing with their players, they’re doing it right because 2019 is going to be another strong draft year for the Americans.

I am a University of Arizona Pre-Business student with a passion for USA and college hockey. I was previously a sports editor and hockey beat writer at the student publication, “The Daily Wildcat”. I enjoy watching film and crunching numbers.