A 1-3-1 record isn’t exactly what Bruce Boudreau’s Anaheim Ducks had in mind when they kicked off the 2015-16 season. Yet through five games, that is precisely where they sit. A team that was characterized by its aggressiveness last year has looked almost disinterested at times in the early going.

To compound the malaise, a talent-laden forward group has been absolutely snake-bitten, going goal-less through the first four games until finally breaking through against Minnesota. Tallying a win against the Wild allows for a momentary sigh of relief, yet some alarming trends are beginning to manifest themselves.

Anaheim struggled with the speed and puck movement of the Chicago Blackhawks in the 2015 Western Conference Final. The Hawks had no problem entering the Ducks’ zone with control, exploiting their tighter puck pressure in the neutral zone. Once in Anaheim’s third of the ice, the Hawks worked a surgical cycle that eventually paid off in a seven-game trench war.

Perhaps in light of that, Anaheim’s defense has been playing with a much wider gap this season. If the aim is to not get burned, it clearly isn’t working. That strategy is even more confusing when considering how fleet of foot the Ducks’ defensive corps is.

With the exception of Clayton Stoner, every defenseman on Anaheim’s roster can match the speed that is rampant in the NHL. For example, here against Colorado, Hampus Lindholm essentially prepares a welcome mat for Matt Duchene to freely enter the Ducks’ zone, allowing him time and space to make a move that eventually leads to a scoring chance: 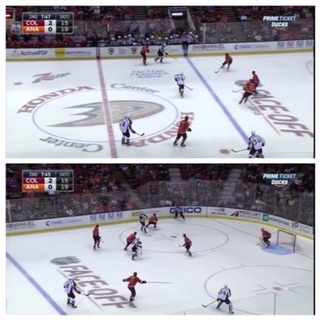 It’s encouraging to see that Boudreau is trying to rectify some strategic miscues from the past, but he may have misidentified the problem here. This eye-test observation is reflected in the analytics: Anaheim is in the bottom third of the league in both total shot attempts against and shots from inside the slot, which are the most dangerous. A tighter gap which puts to use the mobility of Anaheim’s defensemen could at the very least deny some of these easy zone entries, which in turn will reduce the raw shot attempt totals.

Poor strategy is one thing. Players are trained to follow their coaches’ directives, for good or bad, leaving that area outside of their control. Focus and presence of mind are fully within their control though, two things that Anaheim’s players have sorely lacked at times.

In a 4-0 drubbing against Arizona, the Ducks were simply incapable of doing anything right defensively. Here in a penalty kill situation, they are completely mesmerized by the puck in the corner, leaving young phenom Max Domi completely open at the top of the right circle: 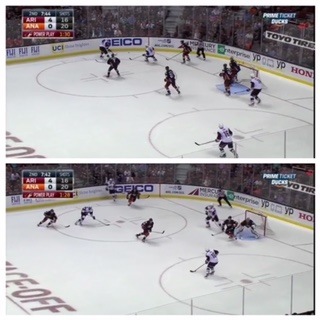 Luckily for the Ducks, Domi bobbles the pass and can’t get off a clean one-timer, but he still manages a quality shot in a high-danger scoring area. Frederik Andersen can help his defense here by keeping his head on a swivel and watching the slot, but he too is in a trance. Simply paying attention and being aware of every player in an opposing jersey would quickly remedy this issue.

So What’s Wrong With The Ducks?

Fortunately, none of these issues are so grave that they can’t be quickly solved. There’s also the cold hard reality that it takes time for any team with a number of new faces to fully gel. Getzlaf and Perry haven’t looked all that comfortable with Carl Hagelin on their wing yet, while Rickard Rakell and Jiri Sekac are still adjusting to an increase in ice time and responsibility.

It’s not all doom and gloom though, as Rakell and Sekac have both shown signs that they’re ready for prime-time with some high-flying play, while Kevin Bieksa has looked surprisingly solid. Good things take time, and if the insane  amount of talent on this roster is any indication, it may just be worth the wait. How long that wait will take though, might determine Boudreau’s fate.