The term “showcase” isn’t an official word used by the NHL or anything like that but rather my way of saying which team the NHL wants to win, and not which one I want to or actually should win. The last two playoff years in hockey have left me absolutely disgusted and sick to my stomach with the officiating I’ve witnessed, and that’s not only because of the Ranger getting robbed by the referees in back to back years, robbed in playoff series’  that happened to be against the NHL’s showcase teams.

In 2006/07 the Buffalo Sabres were the best and most exciting team in hockey. They plowed their way through the regular season and first round of the playoffs. Then they met the New York Rangers who played them tough and were given a run for their money. But the Rangers didn’t just have one opponent in that series, they had two. Both the Sabres and referees being counted. The Rangers were handed penalty after penalty throughout the course of the series and even had a very important goal scored by Karel Rachunek disallowed in game three, a goal that both Sabres captain Daniel Briere and head coach Lindy Ruff said should have counted. In the end, the Rangers couldn’t pull out a series victory and fell in six games. The main reason, because the NHL needed the best team in the NHL to advance on.

Next season involves the Rangers again, this time we get to see how two-headed the NHL really is. In the first round the Rangers took on the New Jersey Devils, from a state which is a terrible national market for hockey. The referees once again did everything in their power to assure a favorable outcome. The Rangers were given constant power play opportunities and non-calls during the series. The most glaring one coming in game five when Rangers’ fourth line center Blair Betts jumped onto the back of a Devils’ defenseman ten feet away from the officials to not get called. They would go on to win the series in five. The NHL needed a New York team to advance, knowing it’s good for ratings and means more money.

Then the Rangers went on to face the Pittsburgh Penguins who were the NHL’s showcase team for that season. With Evgeni Malkin and the league-obsessed Sidney Crosby leading the way. The Penguins were given constant power play opportunities and the Rangers were called for every time they touched Crosby, whether the hit was clean or not. Then in game two with the Penguins leading 1-0 with about four minutes to go in the third, Martin Straka took a shot in the crease and as the puck was sliding over the goal line the referee blew the whistle and called no goal. To this day I still cannot find a single solitary reason why he blew the whistle, or at least one the league could use as an excuse. There wasn’t even a video review on the play to further incense the Rangers. The Penguins went on to win the series in five. The same thing happened in the next round when Pittsburgh played the Flyers, who were called for everything. 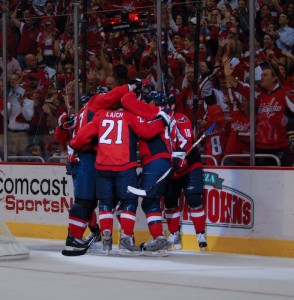 The only time the refereeing ceases to be biased is as we get deeper into the playoffs. It’s as if the NHL does everything they can to get the teams they want to at least the conference finals, hoping they can then be good enough on their own to get to the Stanley Cup Finals. I still to this day feel the only reason why the Red Wings won the Stanley Cup last season was because it was going to be the most watched Finals in the last ten years and everyone would have their eyes on the referees, and the obvious bias would be spotted.

Further proof I have of that is the day after the Wings defeated the Penguins in the finals, NHL.com seemed to be more focused on the losing team from Pittsburgh then the champions themselves. From an article on Bleacher Report which I published on June 5th, read on:

Wait…so the Pittsburgh Penguins didn’t win the Stanley Cup? Could have fooled me. Let me start off by saying I’m not a Red Wings fan, nor a Penguins fan, but I do admit I was rooting hard for the Wings to pull a victory out of this. I watched every game and every minute of the entire series, and when Game six had ended I jumped out of my chair cheering and clapping.

I believed, and still do, that the NHL was rooting hard for the Penguins to win the Cup because they needed their “face” of the NHL, Sidney Crosby, to win so they can further shove pictures of him holding the Cup down our throats. Unfortunately for them, that didn’t happen.

So, I wake up this morning after a late night of watching hockey and go on to NHL.Com as I do every morning. I was more then expecting to see articles and pictures all over the place about the Red Wings winning the Cup, but to my disgust, there wasn’t much at all. The main article wasn’t even about the Championship team! Rather then reading “Detroit Red Wings Capture Eleventh Stanley Cup”, I got to see “Pittsburgh Penguins: So Close, yet so far.” Was this a joke? Apparently not.

But it gets worse…

Further down the page near the frozen moment and located in the game recap was a picture from the great tradition of shaking hands. It was a snapshot of Crosby and Wings’ MVP Henrik Zetterberg shaking hands. Rather then the caption saying “Sidney Crosby shakes hands with MVP Henrik Zetterberg”, it read, “In just his third NHL season, Sidney Crosby came close to adding a Stanley Cup a resume that already includes the Art Ross Trophy and the Hart Trophy.” You have got to be kidding me! But again, they’re not.

Now we move on to the daily NHL poll. I thought a nice question would have been, “Where will the defending Champion Wings finish up next season?”. But again, there is no mention of the Cup champs. Rather, the question was “How far will the Eastern Conference champion Pittsburgh Penguins go next season?”

Now, I never liked the Pittsburgh Penguins, because they are a division rival of my team, but I used to have respect for them. But with the league constantly shoving Crosby and his team from the Steel city down our throats, they fail to recognize who the better team really is, and it isn’t the Penguins.

I got sick to my stomach just digging up that article and reading it all over again, but that’s the feeling I get every time the playoffs roll around. Knowing that the team that should win the Stanley Cup won’t win unless the NHL wants them to and allows it. So this begs the question; who is this season’s showcase team? After about thirty seconds of thinking, I may have figured it out.

The obvious choice is the Pittsburgh Penguins who get every call their way in every single game they play, and games at the Mellon Arena are beyond ridiculous. So I have to think that Bettman’s henchmen will be trying to get them to the Eastern Conference finals. But they aren’t the only team about to be showcased in these playoffs.

With Alex Ovechkin becoming more and more popular, the Washington Capitals become this year’s true showcase team. From Ovechkin’s Skills Competition antics to a certain auto parts commercial he just filmed in the DC area, to the ongoing war with Canadian analyst Don Cherry, AO is finally more recognizable then Sidney Crosby. Only problem is, his team has terrible goaltending and a mediocre defense, although good enough to win a playoff round, no way are they good enough to win the Stanley Cup. [Enter Referees] I don’t have that much money to my name but I would bet a good percentage of it that the NHL is going to do everything in their power to get a Capitals-Penguins Eastern Conference finals, and hope the victor can win the Stanley Cup. It’s sad, but after the last two seasons, I have to believe it is true.

6 thoughts on “Will the NHL’s Bias Show for Certain “Showcase” Teams this Season?”