It’s only been three games but Vancouver forward Zack Kassian is quickly becoming a favorite of the Canucks fan base. He has scored two goals so for on the season and after fighting Edmonton’s Ben Eager gave the home crowd a fist pump. Needless to say, don’t be surprised to see more number nine jerseys showing up in the Rogers Arena stands soon.

For Wednesday’s game against Calgary, won by Vancouver 3-2 in a shoot out, head coach Alain Vigneault mixed his lines up and had Kassian playing along side Daniel and Henrik Sedin. The Canucks offense has struggled out of the game and Vigneault was looking for a combination that might work. Kassian seemed to be a natural fit with the twins and showed that he has a good offensive instinct and knows what to do with the puck.

Both of his goals this year have come while playing with the Sedins and if Kassian can keep up the quality of play that he has shown all year, the Canucks will prosper.

So far in the first three games Vancouver has not had any points by a center not named Sedin. With Ryan Kesler out they are going to struggle to find secondary scoring and Vigneault tried Alex Burrows at center against Calgary – a position he had not played since he was a kid. It did not work as the Canucks still struggled to score.

If Kassian proves that he can play consistently with the Sedins it frees up Vigneault to use Burrows on the second line. Center may not be the best spot, but if Jordan Schroeder or Andrew Ebbett can fill in, Burrows could provide more scoring from the wing. When Kesler returns the Canucks could keep Burrows on that line, which has worked well in the past. Burrows is a goal scorer, plays with energy and to have the freedom to use him on the second line will only help the offense in general.

But that all depends on how well Kassian continues to play.

The main criticism of Kassian’s game so far has been his inconsistency, and that he seemed to disappear during games at times last year. Now a year older the Canucks need him to show up every game. Perhaps playing with two of the top scorers in the league will help keep his attention, keep him driving hard to the net, and give the Canucks more versatility up and down their line up.

With Kassian occupying the first the line there are many combinations that Vigneault can play with. It would be nice to see Burrows teamed with either Ebbett or Schroeder for Friday’s game at Anaheim. When Kesler and Booth return, the two of them should work well with Burrows on the other wing. If that doesn’t work, Chris Higgins can get thrown in the mix.

If Kassian can not pull his weight on the top line the options are less clear. Burrows goes back to the top line and the Canucks lose a consistent goal scorer from their secondary line. Not only has Kassian scored twice with the Sedins he is a big physical player and will create room for the twins. So far he has shown that he can score in more than one way. Against Edmonton he drove the net and was rewarded with a magical Sedin pass that he buried and against Calgary he showed that he could create on his own, taking the puck behind the net and out in in front where he scored.

Check out his goals here: 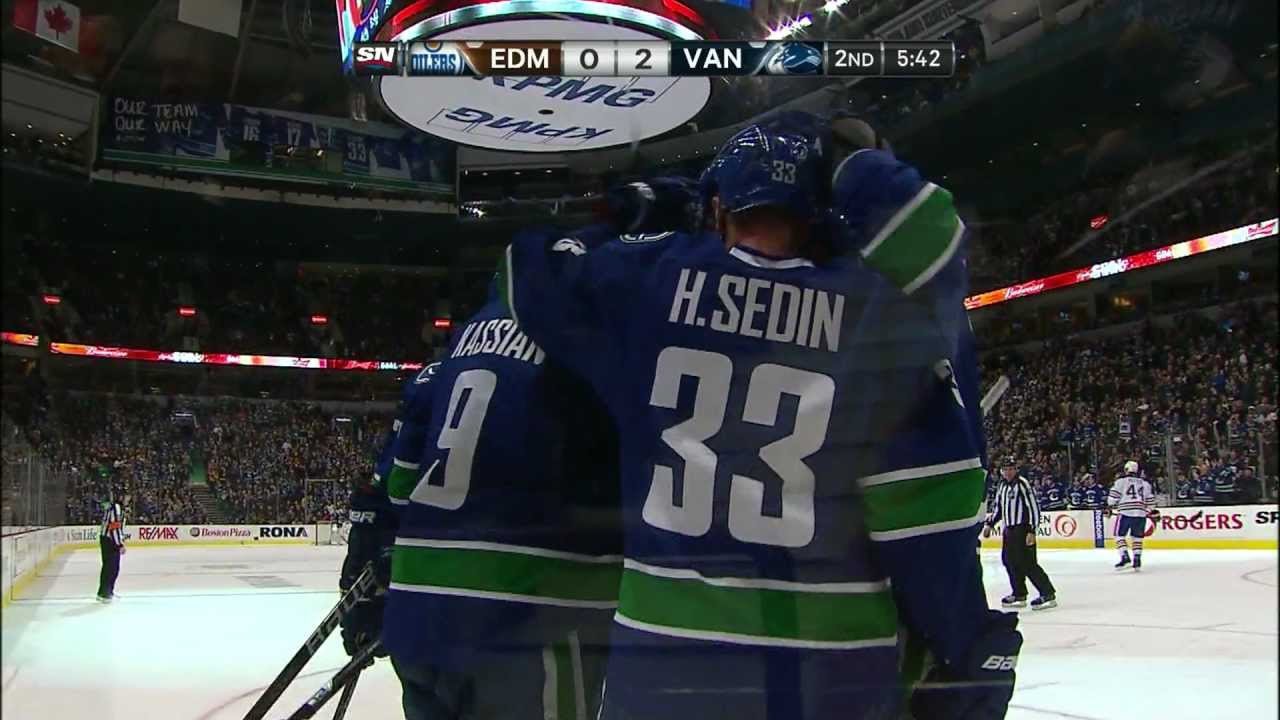 And if that wasn’t good enough he showed some pretty deft moves scoring the winning goal during the shoot out:

Kassian is going to be an important player for the Canucks this year. If he falls back into the bad habits of last year and takes shifts or games off the Canucks will have to move Burrows back and will lose a big gunner on their second line. If that happens, Vancouver could be in for a tough season.