The first round of the 2013 NHL Entry Draft is now complete and we have seen some drama and surprises. Players falling further than they should, highway robbery, and future’s of NHL team’s looking bright or dim. Like in every draft there are some winners and some losers. I’ll go through and tell you who I think are the winners and the losers of the NHL Entry Draft.

The Vancouver Police Department and the Royal Canadian Mounted Police now have a warrant out for Lou Lamoriello’s arrest following the trade he pulled off with the Vancouver Canucks. Lamoriello and the Devils were able to acquire the heir apparent to Martin Brodeur’s throne in Cory Schneider. All the Devils had to give up? The ninth overall pick. That’s it.

The Edmonton Oilers were prepared to offer a first, second, and a top prospect for Schneider, but Mike Gillis probably didn’t like the idea of his goaltender heading to a division rival. You have to believe there were better offers for Schneider on the table than just the ninth overall pick. The Canucks ended up with Bo Horvat, a good player, and now have an irate Roberto Luongo (more on him later).

Perhaps that’s why Lou Lamoriello is just one of the best GM’s in the game.

If you said just yesterday that Seth Jones would fall all the way down to the number four pick and the Nashville Predators, you would have had a one-way ticket to Bellevue Mental Hospital. Somehow, some way it did happen and the Predators are laughing hysterically about the gem that fell into their laps.

Seth Jones had been projected as a number one overall player for many, many weeks, but after Nathan McKinnon was drafted by Colorado, all bets were off. You thought that the Florida Panthers would have taken him, but instead drafted the Russian/Finnish Aleksander Barkov. Tampa Bay obviously chose Jonathan Drouin and then that left the Predators.

Just one season after losing Ryan Suter, Nashville gets their defenseman of the future in Seth Jones, a player that wasn’t supposed to have fallen this far. It was an absolute no-brainer for the Predators to take Seth Jones and all of a sudden the future looks pretty good in Nashville. 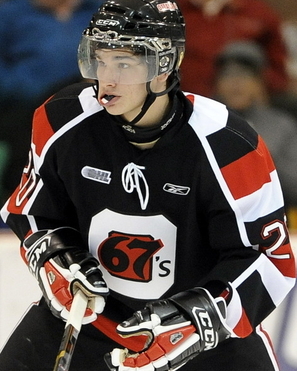 If you were watching the NHL Draft today, you probably couldn’t help but hear over and over again that this is the most important draft in the history of the Calgary Flames. No question that it was important with three first round picks and needing a great draft to help rebuild the team and replace beloved captain Jarome Iginla.

With their first pick, the Flames went with Sean Monahan from the Ottawa 67’s. Monahan is a great scorer and was actually a very solid pick at #6. Needing to find a new center, Monahan will be the future of the Calgary Flames top line and will make fans forget all about Iginla.

With their second and third picks, the Flames went with Emile Poirier and Morgan Klimchuk respectively. Both wingers, Jay Feaster and the Flames made their draft strategy clear: focus on offense. It was a very solid draft for the Flames, but I think they could have drafted a defenseman to even it all out, but you really can’t complain if you are a Flames fan.

The Phoenix Coyotes are in a weird spot right now. Their future in Phoenix is in serious doubt and no one seems to know what the future will bring. The Coyotes went about business as usual and selected a very good player in Max Domi.

Domi is a very talented player and could be the player that saves this franchise. Domi’s play and pedigree could have fans wanting to pre-order tickets and proving to the city of Glendale that the residents do in fact care about hockey. I know it’s kind of out there, but Domi could save this franchise.

On the other hand, if they do move to, say, Seattle, the team has a new star for it’s new home. Domi could be the face of the new Seattle franchise and create buzz. He could make Seattle the next big hockey town as people will see his playmaking ability and see how great of a player he really is.

No matter what happens with the Coyotes home, they have Max Domi and he will certainly make this team better in the long run, Phoenix or not.

Roberto Luongo was all set and ready to start anew in a new city with a new team and put the past behind him. That all changed this afternoon when his backup Cory Schneider was dealt to the New Jersey Devils. All of a sudden, Luongo is the guy once again in net for the Canucks.

Luongo doesn’t have to be too happy with this move. He was supposed to be the guy to leave, not Schneider, and now after coming to terms with leaving Vancouver, he is their guy for the time being.

Head coach John Tortorella will get his first big assignment as Canucks coach and that is to talk to Luongo and make him want to stay in Vancouver. It’s not going to be an easy sell and Mike Gillis may have just shot himself right in the foot.

The Winnipeg Jets with the 13th overall pick made the first head scratching selection of the draft when they took defenseman Josh Morrissey.

Morrissey was projected as a late first round pick, but Winnipeg decided to take him as a lottery pick. It was a bit of a reach for the Jets to take Morrissey considering other defensemen like Ryan Pulock and Nikita Zadorov were still on the board. Morrissey is a solid defenseman, but at number 13, I just don’t know.

If the Jets were so high on Morrisey, thet could have traded down and stockpiled some picks for later and still get their guy in Morrissey. Instead they make an odd choice at picking a late first round talent in the lottery.

It seemed like a given that the Flyers were going to go with a defenseman with the tenth overall pick, but this pick again confused me.

The Flyers selected Rimouski Oceanic defenseman Sam Morin with the tenth pick. Again, with Pulock and Zadorov on the board they go sort of off the board with this pick. The problem with Morin is that he is very raw. He is a physical player with great size and great potential, but again is a raw player.

The selection of Morin is a risky one at number ten and Paul Holmgren just seemingly can’t make a right move so far this offseason. If Morin can reach his potential, he will be a fantastic defenseman, but it is up in the air right now. Risky pick too early for the Flyers.

Who do you think were the winners and losers of the 2013 NHL Draft? Comment below with your thoughts or sent me a Tweet, @MarkWGraham