This past weekend, the University of Minnesota-Duluth won the NCAA West Regional Championship beating Boston University 3-2 in overtime. All three regional games went to overtime, that’s the first time that’s happened since the NCAA went to four regional championships.

In the end, the Bulldogs won two hard-fought, overtime games to advance to the Frozen Four in Chicago, IL, on April 6 and 8, 2017.

Here are three things from the NCAA West Regional Championship.

Video Review Gets it Right 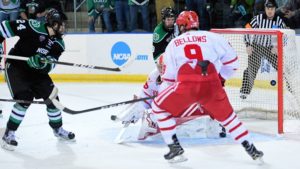 Friday’s game between the University of North Dakota and Boston University was tied 3-3 at the end of regulation. In the first overtime period, the Fighting Hawks thought they’d won the game with a goal from freshman forward Dixon Bowen.

After a lengthy video review, the goal was waved off. UND freshman forward Ludvig Hoff was offside entering the zone. The two teams played on. At the 11:48 mark of the second overtime, Boston University won the game in the second overtime with a goal from Charlie McAvoy.

“We thought that it might be offside and it seemed like the longer it took (to review) the better chance that we were going to live another day,” Terriers head coach David Quinn said.”When the linesman buckled his helmet coming out of the box, we knew that we were going to get another chance.”

“We only had one view of it, in between the intermission before we had to go out for another overtime, we looked at it, it was tough,” Berry said. “To me, it was probably the right call. We didn’t have a clear definitive view because on the box side, Hoff went into the zone and you can’t see from our side. But they took the time to look at it, and they’re very credible people making the call and they made the right call.”

Here’s the official statement from officiating liaison Bill Kronschnabel:  “As is the case in all NCAA Tournament games, all goals are automatically reviewed, including the legal entry into the offensive zone. In real-time, the on-ice officials knew the play at the blue line was in question. After reviewing multiple angles, the crew deemed that there was conclusive video evidence showing that North Dakota’s Ludvig Hoff was in the offensive zone prior to the puck crossing the blue line. Therefore, the goal was overturned.”

UMD Peaking at the Right Time

The Bulldogs enter the Frozen Four red-hot. Since February 3, 2017, the Bulldogs are 10-1-3. With Saturday’s 3-2 overtime victory over the Terriers, the Bulldogs have won seven games in a row.

“When you’re in a lot of those situations, you learn from those, good and bad,” Sandelin said. “I think this group has been in so many close games, not just overtime games, they just believe they can win. That was the case again tonight where they just found a way to win. [I gave them] just a few reminders heading into overtime – maybe simplify the game, don’t force things. I think both coaches maybe say the same things. We were fortunate to get the power play and capitalized.”

“This game was a little bigger than the last one, but we’ve been in that position a lot,” Bulldogs forward Adam Johnson said. “I think that was our 12th overtime game, so we knew how to get through it. We had a good overtime and we were fortunate enough to pull it out.”

UMD goalie finds a way to make the save! #NCAAHockey pic.twitter.com/nA9MvS6UOx

UMD freshman goalie Hunter Miska has been an outstanding pickup for the Bulldogs. The Mike Richter Award finalist has played in 35 games this season, going 26-4-5, 2.21 GAA, .919 save percentage. The All-Conference NCHC Second Team goalie Miska also has five shutouts.

Miska relishes the opportunity to play in big games. Two weekends ago, he led his team to an NCHC Frozen Faceoff championship. During the playoffs, Miska is 4-0-0, 2.13 GAA and .929 save percentage.

“He’s a big reason we are where we are,” UMD head coach Scott Sandelin said. “Hunter was a top recruit for us. He wanted to stay three years of junior hockey because he wanted to come in and be ready. We knew he was an elite guy and he was just never giving up the net. He’s got a great demeanor, he’s a competitive kid that’s very athletic, as you see. He just doesn’t get bothered.”

During the first period of the championship game, Miska robbed Terriers forward Jakob Forsbacka Karlsson on the doorstep. That play was typical of Miska’s weekend. All season long, he’s been there when his team needed him the most.