More sanguine Detroit fans have been saying these things to themselves recently, and we all know why.  The Red Wings show signs of improving, but so far the 2013-2014 season has brought out the worst in the Detroit fan base.

Twitter feeds have gotten more hateful, more masochistic, more apocalyptic.  The grey of Detroit in November doesn’t help either.  Detroit’s record at home defiles Joe Louis Arena, the once mighty temple where masters would dance.  And our resident Russian dancer, Pavel Datsyuk, is out due to fuzziness resulting from an uncalled elbow during Saturdays game against Ottawa.  An elbow, by the way, deemed not worthy of punishment by Brendan Shanahan, a more fluent speaker than player.  An elbow CBC, in all its elegantly veiled prejudice, labeled a “dive”.

There are ways Detroit fans can ease the pain. Can find inner peace. Can reach enlightenment.  Can forgive themselves. Can cleanse…

1.  Music: Younger fans (under 40) often watch hockey, and everything else, online.  This makes blending music with the game easier.  Typically, I despise highlight videos set to music. The game is musical enough.  But the endless repetition of depressing statistics, the murmur of antsy, disapproving fans and the color commentary emphasizing everything wrong with the team gets to be a little much.  So mute the game and put on your favorite soothing or uplifting music.  Turnovers, goals against and beyond-blown calls will hurt a little less.  “It’s okay, it’s okay,” will echo in your head instead of “please, kill me,” and your grieving period after games will diminish.  Even people with dark personalities have uplifting songs at their disposal, so please, find some and give yourself a break.

2.  Date:  This is very dangerous, and can lead to worse problems than a failing hockey team.  But the game seems less serious when a delightful companion is around, one who understands how important hockey is to you, if not to them.  The buzz of the phone gets more exciting when a candidate for intimacy is out there.  Instead of your friends texting “WTF” to you five times a period, dating increases the chances an intrigued member of the opposite, or same, sex will want to know, “what are you doin :)?”  But remember to use caution.  This can backfire terribly. Potential bed-fellows are attracted to confidence, something members of Hockeytown are lacking at the moment, and we cannot speak to human beings the way we speak to our television and computer screens.  You have been warned.

3.  Focus on Grand Rapids: While things for the Red Wings have been quite bad, things for Griffins have been quite good.  A Calder Cup Trophy last season and a 13-4-1 record this season both point to a bright future in Detroit.  And the Griffins are winning with style, much like the Wings used to do.  I have written about the prospects extensively; a group of young players so promising, I fully expect us to win more Stanley Cups by 2020.  The AHL is not as prompt with their highlights as the NHL, but this is expected and highlights are still available, so enjoy them.

4. Focus on work:  Work sucks.  It tires people out, makes them miserable, leads to alcohol abuse and destroys families.  Monster.com commercials are especially strange.  Why is that dude jumping for joy? His days are about to get a lot longer. Having said all that, money can buy temporary happiness, along with some fun experiences, and most people earn money by working. Excelling at the work place not only brings in cash, but gives people a sense of pride, however minimal it may be.  We have far more control over our lives than over our team, so now might be a good time to perfect our trades.

5. Remember the past: Wings fans have more to feel good about than anyone ever has.  Our organization has given us everything we could ask for, and given it over and over again.  Remember the old woman at the Cubs games in 2000-whatever? Remember how she looked adorned in Cubs gear, holding a sign and weeping?  I hope she is still with us, but she might not be and she probably won’t see the Cubs win anything.  That will never be us.  We will never know what that feels like.  No one will ever say “those poor Wings fans” and have it mean all that much.  The world is filled with sports fans, the majority of which will never see their team do what ours did.  Remember that, and relive it online.  We can die peacefully, and have been able to do so since 1997. 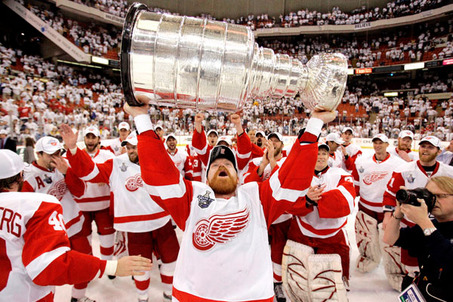 By winning two of the last three games, Detroit fans can cautiously hope that the most depressing skid in recent memory is ending.  The series of heartbreaking losses got into Jimmy Howard’s head, so he will sit, undergo positive reinforcement therapy (I hope) and try to forget the trauma of the last four weeks.  Gustav Nyquist earned his freedom and will be in Detroit indefinitely.  Darren Helm has discovered a set of hands that few, including himself perhaps, thought he had.  While we don’t know if Datsyuk is concussed or not, “no big deal” and “ok” have been the words associated with his injury, thus far.

The woods are dark and deep, but they are not lovely.  They are filled with beasts, ghouls and every other imaginable terror.  But sooner or later the Wings will be out of them.

These five steps could help you get out of them too.