The red-hot Red Wings took a three-point lead over the second-place Montreal Canadiens last night with a 3-0 whitewashing of the Habs right in Montreal. In the other two National Hockey League games, Toronto blanked Chicago 4-0 and the improving Boston Bruins downed the New York Rangers 5-3 in a wild one in Boston.

In Montreal, the Red Wings had to play the game wearing a set of Hamilton Red Wings sweaters after two sets of the Detroit livery were stolen from the visitor’s dressing room at the Forum. The loss of the garments barely caused a rumble in the smooth-running Detroit hockey machine. 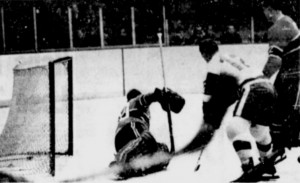 Wings goalie Roger Crozier notched his league-leading seventh shutout of the season, but he had lots of help from his mates in this one. Detroit outskated the Habs at every turn and checked Canadiens almost into paralysis.

Young Paul Henderson opened the scoring for Detroit with what proved to be his league-leading seventh winning goal of the season. He scored just before the half-way mark of the opening frame moments after he returned to the ice from serving a hooking penalty.

Gordie Howe netted the second Detroit goal at 8:41 of the middle frame. It was big Gordie’s 19th of the season and came with Montreal’s Jean-Guy Talbot off for hooking.

Ron Murphy closed out the scoring for the Wings two minutes later off a beautiful setup by Bruce MacGregor. MacGregor had picked off an errant J. C. Tremblay pass at the faceoff circle and fed Murphy perfectly at the Montreal goalmouth. Murphy made no mistake and beat Canadiens goalie Gump Worsley, who had little chance on the play.

On nights when the Toronto Maple Leafs are firing on all cylinders, there isn’t a hockey club on the planet that has much of a chance of taking them down. Last night at Maple Leaf Gardens was one of those nights. 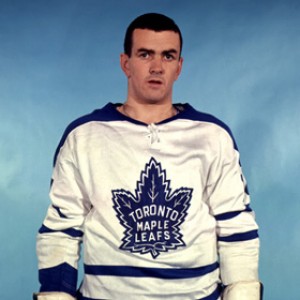 The Maple Leafs played about as perfect a game as they can. It was only a heroic effort by Chicago Black Hawks goalie Glenn Hall that kept the score respectable as the Leafs drubbed the visitors 4-0. And it wasn’t a terrible performance by the Hawks, by any stretch of the imagination. They played well but the Leafs were just that much better.

Johnny Bower was flawless between the pipes for the Leafs, making 24 saves for his second shutout of the season. The closest he came to surrendering a goal was in the third period when Bobby Hull handcuffed Ol’ Jawn with one of his typical blazing slap shots. Bower got a pad on it, but the puck trickled loose and towards the goal line before the Toronto netminder scrambled to cover it just in the nick of time.

The game was scoreless until Dave Keon lit the red light for Toronto with one second remaining on the clock in the second period. The classy Leafs centre connected on a bullet-like slap shot that left Hall no chance on the play.

That goal seemed to spur the Leaf on to better things in the final frame. They poured 17 shots at Hall, beating him three more times. Frank Mahovlich, Keon again and Bob Pulford were the scorers to make the final 4-0 for Toronto.

The game was not a rough affair, but there was an element of chippiness that boiled over late in the second period for the game’s only fight. It was a Mutt-and-Jeff matchup that saw Chicago’s huge rookie Ken Hodge tangle with Toronto’s Wally Boyer, who gives away five inches and 40 pounds to the big freshman.

The two engaged in more of a sweater-tugging duel until Boyer surprised Hodge with a swift uppercut that caught him directly on the chin. The officials separated the pair and sent them to the sin bin with the first majors handed out at the Gardens all season. Hodge was then allowed to head to the Chicago dressing room for repairs.

The Boston Bruins gained ground on fifth-place New York Rangers with a 5-3 win at home yesterday, but the main post-game discussion centred on the clash between bad guys Reggie Fleming of the Rangers and the Bruins’ Ted Green. Fleming may have earned himself a suspension as a result of the incident. 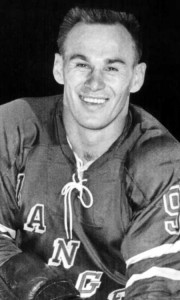 The affair began when Green and Fleming tangled and engaged in a wrestling match. Green got a hand loose and tagged his former team-mate Fleming with a solid right just over the eye. The linesmen managed to separate the two and escorted them to the penalty box.

Referee Frank Udvari imposed a double-minor on Fleming and gave a single minor penalty to Green. Further words were exchanged and as the two began to enter the penalty box, Fleming swung his stick wildly at Green’s head.

Fleming’s aim wasn’t good as he missed Green completely, and instead his stick connected with the head of linesman Brian Sopp. Sopp received five stitches above his left eye for his trouble. Fleming’s efforts earned him a further game misconduct, finishing him for the night. It’s quite likely that NHL president Clarence Campbell will mete out further discipline on the Ranger forward when he reviews the case.

Fleming was traded from Boston to New York a couple of weeks ago in exchange for forward John McKenzie.

Fleming commented on the situation after the game:

“I knew people would be looking for me to have a jam with Teddy. I was determined to play hockey. Now Udvari tells me this will get me thrown out of the league. I can’t believe it. I was just trying to mind my own business.”

Fleming was adamant that he was the victim, just someone trying to play his game:

“He was coming around his net and I stepped in his way to slow him down. He high-sticked me but I still wouldn’t retaliate. He hit me again but I didn’t do anything. 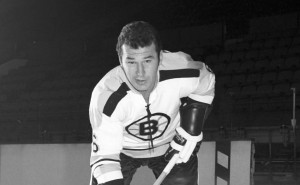 Fleming argued a bit about receiving a penalty for which he was innocent and that earned him a 10-minute misconduct. Then he and Green exchanged words and that’s when the stickwork took place:

Teddy said something to me and I just flicked my stick at him. It hit Sopp, it was all just an accident.

Sopp is a rookie linesman in the league. The past week has been a rough initiation for the young official, this is the second time he’s taken the brunt of the aggression in a player dispute. On Thursday evening, in another game involving the Bruins, Sopp took a couple of punches from Boston’s Forbes Kennedy.

Sopp’s run of bad luck didn’t end with the high stick yesterday. As Fleming stormed out of the penalty box after being tossed from the game, he slammed the door and it caught Sopp’s hand, bruising it badly.

Howe Boys Back with Roostertails 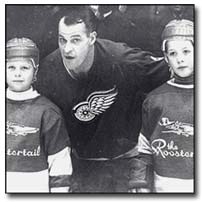 Gordie Howe’s two sons Mark and Marty have rejoined the Detroit Roostertails pee wee hockey team. The boys had been pulled off the team by their famous father when he felt the people running the club were becoming too dedicated to winning and taking the fun out of the game for the kids.

The dispute began when the Detroit coach brought in an “import” player from Toronto. This resulted in a local boy losing his spot on the team, something that bothered the Howe family greatly.

Apparently the situation has been resolved to the satisfaction of all. The Toronto lad has returned home and will play for Weston. The Detroit player has returned to the Roostertails and Mark and Marty are with the team once again as well. This is good news for organizers of the upcoming Quebec International Pee Wee Hockey Tournament. They had expected huge crowds coming out to see the Howe boys and their future Hall of Fame father, who has committed to attending the event.