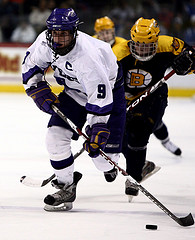 As NHL.com reports: “He set the record for most points in a high school hockey career, surpassing an 11-year-old mark of 378 points, set by Johnny Pohl of Red Wing High from 1994-95 through 1997-98. Hanowski finished his career with 405 points (196-209-405) needing 111 games to break the mark Pohl had set in 112 – he tied the record with a shorthanded goal during a five-on-three and surpassed the record with a power-play goal.” In 2008-09 he was named the Associated Press State Player of the Year and a Mr. Hockey Finalist. NHL Central Scouting’s Jack Barzee stated: “Ben needs to improve his overall skating, but his unselfishness, his hands and above all his ability to score goals sets him apart. His knack for scoring goals is similar to Thomas Vanek – his extra dimension is scoring goals.”Next season he’s committed to St. Cloud State University.