Mrazek’s pre-Detroit highlights include the 2012 World Junior Championships where his Czech Republic team defeated Team USA thanks to his 52 saves and he later went on to be named the top goaltender of the tournament. In 2013, Mrazek lead the Grand Rapids Griffins to a Calder Cup championship where they defeated Tampa Bay’s AHL affiliate, the Syracuse Crunch.

Many touted Mrazek as the Red Wings goaltender of the future, being able to replace incumbent Jimmy Howard a few years down the road. Someone didn’t tell Mrazek he’d have to wait a few seasons. At the ripe age of 23 years old, Mrazek is now leading the Red Wings, a team that last missed the playoffs before Mrazek was born, into battle against the top offensive team. Standing one game away from advancing to the second round, I thought we’d look at a couple of things that Mrazek does well as well as an area where Mrazek needs to improve.

The great Martin Brodeur was always lauded for how well he could play the puck. He was so good with the puck that he was essentially at 3rd defenseman for the New Jersey Devils. The NHL introduced the trapezoid in 2005 to combat Brodeur’s puck-playing prowess. While no one may ever be as good as Brodeur, Mrazek is one of the few elite puck-handling netminders in the NHL right now. Check out Mrazek stop this dump-in, read the play, and start a breakout with his good pass.

His counterpart, Ben Bishop, is definitely no slouch either. The ability of goaltenders to play the puck is such a valuable skill as it can significantly reduce the amount of time a team spends in their defensive zone. I believe that Mrazek’s puck-handling as allowed the Wings to prevent the Lightning from hemming them in their own zone on every dump-in.

Unless you are Henrik Lundqvist, most successful goalies have the ability to quickly get out to the top of the blue paint to take away angles from shooters. Mrazek is one of the most aggressive goalies I’ve ever seen, coming way outside of the crease to make saves. Sometimes this can burn him, like the game-winning goal in Game 4, but a majority of the time it has been extremely frustrating for Tampa’s shooters. Check out Mrazek’s aggressiveness on this save from Game 4.

You can see how Mrazek refuses to back down as Valtteri Filppula closes in. Filppula eventually runs out of options and tries to beat Mrazek high glove where there simply was no room. Now Mrazek’s aggressiveness only works if his defense is on board. When a goaltender is that aggressive, teams will try to run a lot of backdoor plays. If we stop the Mrazek save on Filppula at this point, you’ll see what I’m talking about. 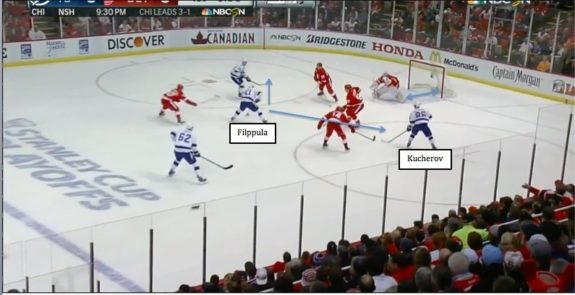 You can see that if Filppula were to dish the puck to either of his wingers, that would be a slam dunk in the wide open net. Mrazek is extremely far out, so if that puck gets dished to the sides, it’s an easy goal. However, a goaltender can be this aggressive when his defensemen and forwards understand how to cover him. Look at how both Nyquist and Ericsson have their sticks in the lane, preventing Filppula from passing to Nikita Kucherov. They have taken away the backdoor playing, allowing Mrazek to take the shooter and be aggressive. The Wings have consistently done this throughout the series, save Game 2, and that’s part of the reason why the Lightning have struggled to generate offense.

This is the one area where Mrazek has struggled throughout the season, but you can expect that of a rookie goaltender. Before Games 3-5, Mrazek had struggled to put together strong consecutive starts. Check out how his save percentage went game-by-game this season and how his rolling save percentage was affected. 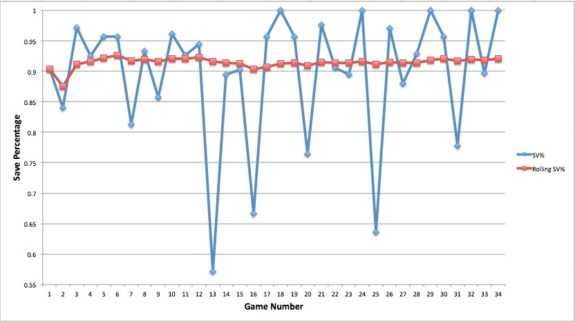 You can see that Mrazek’s game-by-game save percentage has been all over the place. He’s got five shutouts on the season but also has five games where he stopped fewer than 80% of the shots he faced. Every rookie goaltender struggles with consistency and the key for Mrazek will be to find a way to string together multiple strong performances. He has an opportunity in Game 6 to ground the Tampa Bay Lightning once and for all and if he can do it, it will be his 4th consecutive good start. He’s only going to get better and I can’t wait to see how he progresses in the coming years. The best part about all of this? The Wings get another season of the Mr-azing, Mr-awsome, Mr-azzle-dazzle for just a $569,000 cap hit.