The building was buzzing as the Canucks walked out to “Where the Streets Have No Name,” by U2 before game 7 of the Stanley Cup Final. Captain Henrik Sedin led his team onto the ice in a one game face-off for the Stanley Cup.

Three hours later, the Canucks left the building dejected while the Bruins lifted the Cup in elation. That night, broken glass and riot squads littered the streets of downtown Vancouver.

Since then it’s needless to say that the teams have gone in different directions. Vancouver may have won the Presidents’ Trophy that year following their Stanley Cup Final defeat, but they have only won a single playoff game since then.

On the other hand the Bruins have made the playoffs in each of the last three seasons. Since 2011, the Bruins have played in 41 postseason games, to the Canucks nine. They made another trip to the finals in 2013 where they eventually lost to the Chicago Blackhawks, and made some noise in the playoffs last season before being knocked out by their rival, the Montreal Canadiens.

They were a powerhouse, at least up until this year where they struggled out of the gate. They are sitting fourth overall in the Atlantic division with 63 points.

Oddly enough, the Canucks also have 63 points this season.

Forget the finals, these two teams are battling just to stay alive in the playoff race.

With both teams hovering around a wild-card spot, it begs the question: are the two teams evenly matched?

This is arguably as close as the teams have been ever since their meeting the following season after the Stanley Cup Final. The Canucks came out on top during that feisty afternoon affair, with unlikely hero Cody Hodgson scoring the game-winning goal in a 4-3 Canucks win.

It was a turning point for the Canucks that season. While they went on to win the Presidents’ Trophy, they weren’t the same team after that match-up on January 7th. It was the 42nd game of the season for the Canucks. Although they would go on to win the majority of their remaining games, they lacked that killer instinct they had the year before. 17 of their remaining 40 games that season were decided in overtime.

Their match-up tonight is only the fourth meeting between the teams since the final in 2011, and the second one at Rogers Arena. The last time the two teams met in Vancouver, it was one of John Tortorella’s most successful games behind the Vancouver bench. After he didn’t like his team’s effort early in the second period, he took a timeout and ripped into his team. They responded and came out on top with a 6-2 win.

Friday the 13th:Torts resurfaces & Bruins here. 6-2 win over BOS in Dec 2013 probably the high point of his tenure with #Canucks.

The Bruins got their first win against the Canucks since the Stanley Cup Final later that season. The Canucks made a visit to TD Garden, but the Bruins were the better team throughout the game en route to a 3-1 victory.

Which brings us to this season. It is the fourth season since their Stanley Cup Final match-up, the last final to go seven games. No longer is either team dominating their respective Conference’s like they used to during the regular season, and have very similar stats going in to tonight’s game. 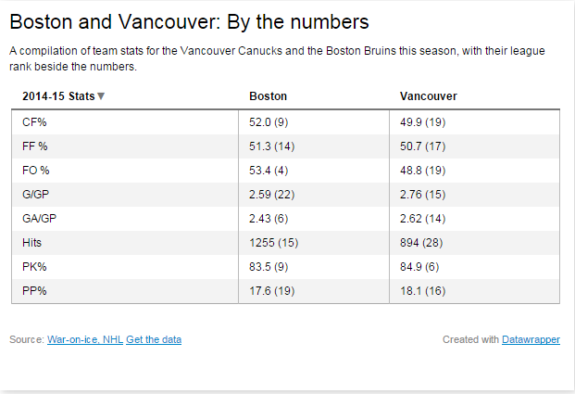 Both teams have minor edges in some categories, but for the most part it’s pretty close. Vancouver has the special teams advantage by a slim margin, but Boston probably gets the edge overall.

It’s interesting to see these two teams with less discrepancy between them this season, especially after Boston’s win in the final convinced Gillis that his team needed to get bigger. Following the 2010-11 season, Gillis acquired a few players to make his team bigger, including Dale Weise, David Booth, and Zack Kassian.

After their cup final win, the Bruins became a model of success for the Canucks. Current Canucks general manager Jim Benning is a benefactor of the Bruins success and tonight is the first time he will get to face-off against his former colleagues.

Judging by how little their is between these teams right now, it looks like it should be a close match-up. Neither team is lighting it up, as they both have five wins in their previous 10 games.

These two teams will always be connected by the entertaining Stanley Cup Final they put on for the rest of the NHL. With both teams hanging on for their playoff lives, we should see an entertaining match-up between two close teams tonight at Rogers Arena.

1 thought on “Are the Bruins and Canucks Evenly Matched?”