Ah… the lore of hockey. A rich tradition of boys calling themselves Iggy, Vinny, Chelly, Patty, Ovi…you get the idea. Good thing we have sports writers to add some color. Hockey lines have been labeled as far back as the 1920s when Bun Cook, Frank Boucher and Bill Cook formed the Rangers’ A-Line which was the train line that ran right underneath their home rink, Madison Square Garden. (this and some of the data below if from the terrific book – Hockey: A People’s History

by Michael McKinley). The naming of lines had its heyday in the 1950s and 60s but has since waned; one of the many drawbacks of the frequency of player movement. Perhaps that should be a goal of THW, a nickname for at least 1 line on each club (who’s up to the challenge).

** This is neither a list of the greatest talent nor the most clever nicknames but a blending of the two. There’s also no real order to the list – it’s just ten of the great ones.

Had some grief at Puck Daddy about this line but I’m going to stick with it. I think the name is clever and the guys are all top notch players..

The two Zs should be obvious and if you didn’t already guess – Langenbrunner is a seasoned veteran. HF Boards thinks they are amongst the best in the league. 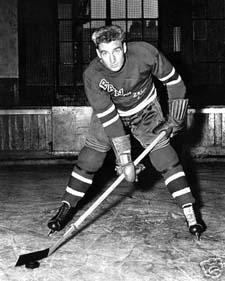 Not because of the Depression but because they were the team’s Bread and Butter.

Just so you know how good these guys were, if you adjusted their stats each guy would have had 133 points during their best season (402 combined points according to sdexceed). Neil Colville is in the HHOF.

3. The Legion of Doom

For a few years they were very scary to play against.

– Our feature on the Triple Crown Line

The first trio to each score 100 points in the same NHL season. Named after the team logo (the King’s Crown) tied with the association of horse racing’s ultimate accomplishment.

Named after the local utility and known for lighting up the goal light behind the net, this line won the Cup 4 straight years. They will probably be the last to ever do so. Bossy, Gillies and Trottier are all members of the Hockey Hall of Fame

** Obviously not in the NHL but I thought they were worth a mention in hopes of education those that are newer to our great game. 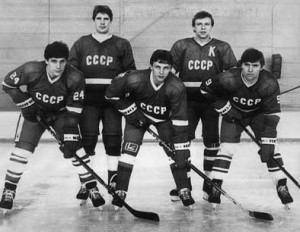 Simply one of the games best trios. They beat up on world competition through the eighties and changed the game as we know it.

While reminiscing on the greats of the game it may seem a little odd to show a clip of a funeral. I wanted to include this for a couple of reasons. To show what kind of love the city of Montreal has for its hockey stars, how embedded the game is into our culture and also to share the words of advice that Jean Beliveau gives us at the end of the clip.

Not because they were German but because they all hailed from Berlin, Ontario – which changed it’s name to Kitchener after WW1. The fellas finished 1-2-3 in scoring in 1940 and won Stanley Cups in 1939 and 41. For obvious reasons, as WW2 came on they changed there name to the Kitchener Kids. 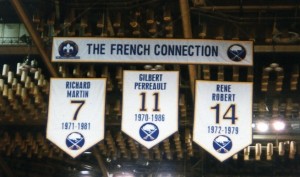 These guys could produce points with the same consistency as the then booming Detroit automotive production lines.

* honorable mention goes out to Eric Lindros who was on two great lines, The Legion of Doom  as well as the Crazy Eights with Recchi and Fedyk (who wore numbers 88, 8 and 18)