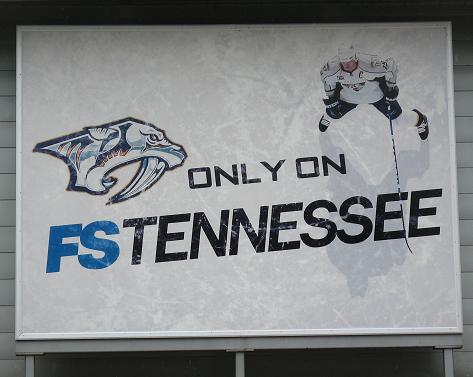 Arnott casts a long shadow over Lower Broad in Nashville

Drafts, trades, and the not so magical state of liminality better known as Freeagentapalooza are reminders to sports fans that it is dangerous to get too attached. We may dearly love what they do in play, the character they bring to the team culture and what their presence brings to our city but still, unless its a native son or someone who is able to really set down roots, most of them will depart sooner or later.

It is unavoidable that Nashville loses a hand full of people who just never quite get a toehold on the team. Scatchard, Grebeshkov, everyone else, best of luck and I hope you find your place in hockey. Then there are the more familiar faces who either decide to leave or are edged out by time and changes. I always found the Vern Fiddler Dance of Denial to the penalty box and Greg DeVries’ asides during the Predators video clips to be almost as entertaining as the games themselves, but I knew we wouldn’t have those forever. Let’s pause for a moment and remember the players who left for other teams during this past season and wish them well at their new homes.

Ryan Jones Jones will be in his dotage and some of his fans will still see him as the sweet, goofy kid brother figure he seemed to typify as he worked hard to improve his game and find his groove as part of the Predators program. He had discovered his strengths and was working to create a playing style that made the most of them when he was picked up on waivers by Edmonton. We’re looking forward to seeing a healed and ready Ryan representing for the Oilers this coming Fall. Best of luck to ya, big guy!

Dan Ellis Ellis departed for Tampa Bay earlier this month, taking with him his mighty net-fu and one half of Saskatoon’s answer to Ren and Stimpy. Wade Belak has never had a better straight man and will have a tough time finding such a perfect foil in the current crop of Big Cats. The denizens of the ‘Stone and the crew at the Murfreesboro Road McDonalds are all going to miss you, Elly!

Dan Hamhuis I’m going to take an unpopular stance and say that too much is being made of what he had to say about playing in Nashville earlier this week. He isn’t the first player to leave Nashville and suggest that playing in a nontraditional market has its own set of challenges. He’s been a popular whipping boy for message board warriors for the last two years and this introspective, generally soft spoken athlete has exercised far more restraint than some of his colleagues would have if subjected to the same verbal abuse. Hammer brought heart to the game and strong sense of community involvement when he was off the ice. Time to wish him well as he and his family start a new life closer to home.

Jason Arnott I guess it was time and I’m happy to see that he’s getting to go back to the team that put him on the map with that Stanley Cup winning goal in 2000. I was also very glad to see that the New Jersey club was excited about his return. Still, its hard to imagine not having Arnott’s laconic presence and wry humor as a part of the post game coverage. Anyone who is not sure if he made a difference just has to look back at his late season return to the ice last year. The only return from IR that has galvanized Nashville so intensely before was Steve Sullivan’s reentry after a two year absence. Arnott brought the Gary Cooper vibe. Lucky Devils! He will be missed here.

Gentlemen, I raise my iced tea to you and offer a libation to the Hockey Gods for your continued success.

Now babies, enough with the melancholy already. I have to tell you about the last two days of rookie development camp and then we’re gonna work our way back in time when men played in kilts and the pucks were logs!