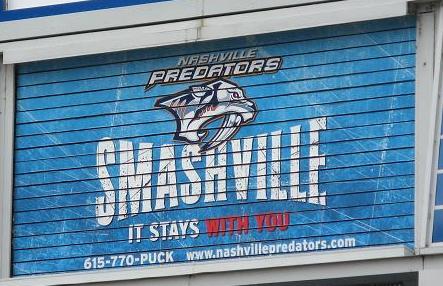 The annual Skate of the Union at Bridgestone had respectable attendance figures for a hockey event at one of the hottest times of the year in Middle Tennessee. Right now, butts are usually in bleachers at youth soccer matches. Local pro sports speculation often focuses more on what’s happening at the Flaming Thumbtacks’ camp than the doings at the ‘Plex. That there was a need for crowd control at all speaks well of the dedication of the Preds Faithful.

The fan chatter about this year’s event concerned the possibility that merchandise would be thin given the extent of the damage inflicted by flood waters to the lower levels of Bridgestone last May. This was belied by the gleeful packs of kids and some adults carrying armloads of sticks and assorted gear to the checkout table. Aside from one man who actually shouted “GIMME!” when he saw a lone Warrior stick among the pile of Eaton castoffs with Hamhuis’ name on them, everyone else was picking up sticks that bore names with far more favor in Predsnation. Artifacts of the tenure of recently departed captain Jason Arnott and ’09/’10 standout Patric Hornqvist were particularly sought after last Thursday. Tots, teen girls and members of “The Train” were also hot on the hunt for anything bearing the name and number of fan favorite Jordin Tootoo. The common denominator was that everyone wanted a little saber-toothed mojo for themselves.

Following the sale was the annual town meeting between representatives of the coaching staff, the owners, the players and the fans. For fans, this can be a frustrating endeavor, because even though questions are taken beforehand, there is still the element of spin that precedes the substance and tonight’s address was no exception. The essential message from the dias was one of “commitment to a winning team” This was driven home repeatedly by a representative of the owner’s group, head coach, Barry Trotz, and well, nearly everyone else onstage.

While most of the people onstage kept the message vague and hopeful, Predators GM David Poile went to the heart of the matter and brought up some key talking points that fans and observers had been wondering about. He mentioned the emphasis on adding size to the team and how his latest draft picks and some of the trades would afford some strength and offensive power to the ’10/’11 edition Predators. He said that in addition to the newest draftees, there is a considerable amount of size and talent coming up through the development system. According to Poile, Milwaukee and development camp stalwarts Budish, Blum and Pickard will all get a chance to play at the ‘Stone this coming season. The Arnott trade netted Nashville Ryan Parent, a young, big, aggressive d-man who looks very promising. He also mentioned signing some impressive free agents, Sergei Kostitsyn and Matthew Lombardi. Lombardi was welcomed onstage to applause from the crowd and a standing ovation as he put on his Predators sweater.

Per Poile and Trotz, there would be new systems in place this year for PP and PK and as far as offense goes, “this is going to be make or break time”.

The biggest announcement of the night came when Poile and Trotz discussed how they decided who would wear the ‘C’ following the departure of Jason Arnott. To them, it was an easy decision. Their choice, Shea Weber, is someone who had garnered a lot of positive attention at the Vancouver Olympics and who has come up through the system, in fact, he is the first captain to have been drafted and developed by Nashville. Weber responded to the applause and praise with a great deal of humility.

“A little heavy,” was the response from Weber.

Like Lombardi, he is focused on what he can bring to the team this year. When asked which captains he would model himself after, he responded that he had worked under some great captains but he would stay the same as he was and imbue the role with his own personal style.

During the Q&A that closed out the meeting, Lombardi stated that Nashville looked like a great fit for him and his family. Fans were advised that efforts were still being made to improve the parking situation. The locker rooms were completely destroyed but they would be rebuilt and would be better than ever by the time the season started. Fox Sports had inked a multiyear agreement to show even more games.

And yes, someone had to ask it. Would Radulov ever return?

David Poile stated with a bit of an eyeroll that Radulov had a three year contract with the KHL that he intended to honor. He went on to say that he had talked to him and that he was very positive about the Predators organization and was “itching and hungry to come back to Nashville.”

With that, and some more teases about changes in special teams, the meeting was over for another year.

2 thoughts on “2010 Skate of the Union: For Nashville, Size Does Matter”