For those of us who follow the Californian teams closely, Anaheim and San Jose’s 165 penalty minute gongshow on Sunday was far from surprising. These two teams have a rather “long” history of bad blood. Both are young franchises that don’t have any history past the 1990s but these teams really don’t like one another. When did it start? Depending on your analysis, it all got interesting about 13-14 years ago.

In March of 2001 the Ducks traded Teemu Selanne to the Sharks in exchange for Jeff Friesen, Steve Shields and a second round draft choice. Selanne vastly underperformed in his little over two seasons with the Sharks. After leaving for Colorado and having another poor season, Selanne returned to the Ducks where he became dominant once again. Outside maybe the Avalanche, the Sharks fan base is the only one in the league with ill feelings towards the great Finnish Flash. Having him struggle mightily after giving up a fan favorite in Friesen, that doesn’t sit well with fans of Team Teal.

Fortunately for the Sharks, the first year Selanne returned to Anaheim was 2005-06. That was the year Jonathan Cheechoo scored multiple hat tricks against the Ducks. The constant scoring didn’t sit well with Ducks fans nor the front office. The following season Anaheim brought in Chris Pronger, a future hall of fame defenseman, who Sharks fans already despised as a member of the St. Louis Blues. Anaheim would go on to win the first Californian Stanley Cup in 2006-07.

Sharks fans were hopeful to get at least some sort of revenge on the Ducks in their first ever playoff series between the two clubs during the 2009 playoffs. Unfortunately for Sharks fans the top seeded Sharks lost to the eighth seeded Ducks in six games. Ryan Getzlaf fought Joe Thornton at the beginning of Game 6. Joe Pavelski also got into a fight that night, as the animosity between these teams only seems to grow.

It’s quite surprising how four paragraphs into this article and no mention of Corey Perry. Anaheim’s All-Star winger is a notorious dirty player. From his slash to the face of a fallen down Marc-Edouard Vlasic, to cross-checking goaltender Evgeni Nabokov in the back of the leg, to running into backup netminder Brian Boucher, Perry is the most notorious villain in Sharks territory.

When a player does something as ridiculous and cheap as going after a goaltender for no apparent reason, you can expect some retaliation. Color me bias, but Owen Nolan had reason for running goaltender Ed Belfour, as he deserted San Jose for Dallas. Perry on the other hand, this was just uncalled for. Few Sharks fans felt bad when Blake speared him in the man region.

Notice the score in this fight below between Perry and Dan Boyle. Look familiar? The Ducks are known for getting into extra curricular activity when getting their rear ends handed to them. 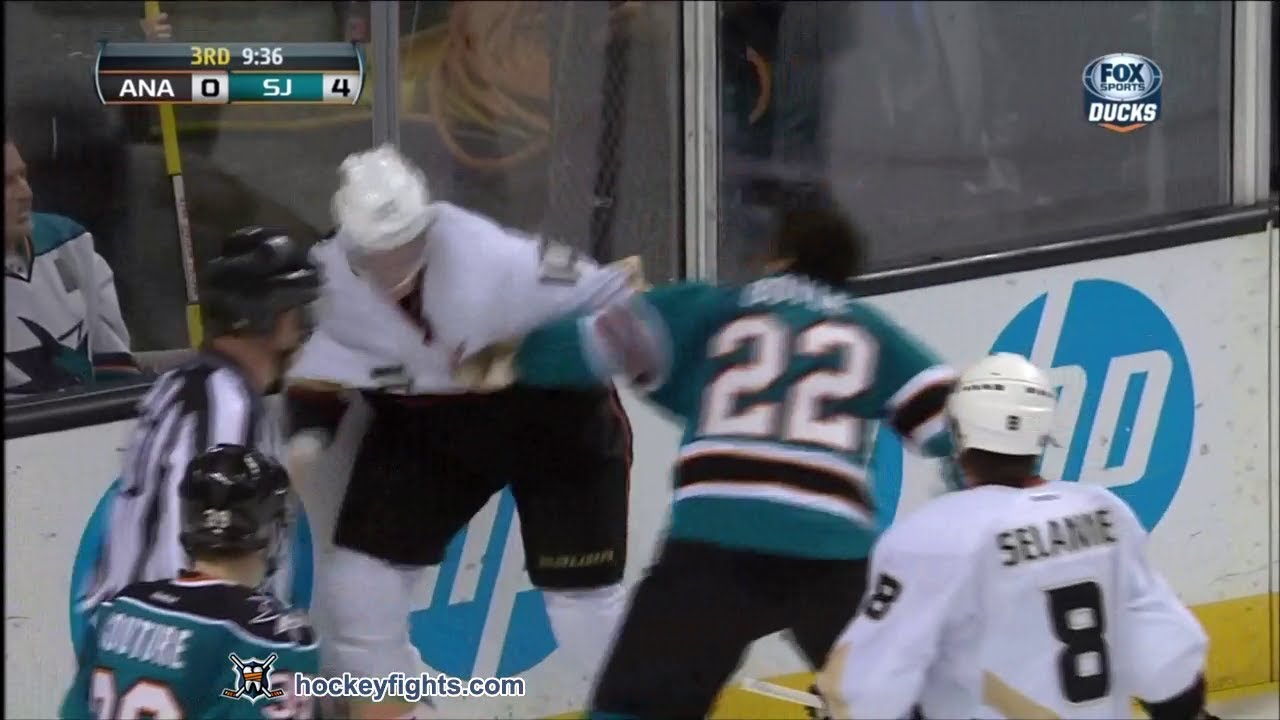 The 165 penalty minute bonanza on Sunday was fun filled from the get go, even down just two goals, the Ducks, who had been red hot coming in, were on edge finding themselves losing on the scoreboard. Even with all the actual fights, the most entertaining of them all was the non fight between Getzlaf and Sharks rookie defenseman Mirco Mueller. Doesn’t matter how new the kid is to the rivalry, he understands the dislike of the Ducks.

Sure enough the Kings and Sharks have had more playoff battles and don’t like each other, and the Kings and Ducks don’t like each other. However, there isn’t quite the same animosity in either of those rivalries than the Sharks and Ducks. It’s been a long time since the 2008-09 series. Hopefully this year the Sharks and Ducks renew the postseason version of this rivalry. Boy oh boy will that be fun to watch. Getzlaf and Thornton 2.0? One can only hope.

1 thought on “Best of Bad Blood: History of Sharks-Ducks”