With the playoffs looming, teams are doing what they can to make it into the postseason.  The talk of the town is the Boston Bruins who currently hold the most points in the NHL and are the likely favorites to win the President’s Trophy.  Another team that hasn’t gotten quite as much press is the Columbus Blue Jackets.

Since their inception in 2000, Columbus hasn’t done very well – and that’s putting it lightly.  In their 14 years of existence they’ve made the playoffs once (2009) and were swept in four games in the first round.  After Scott Howson was eventually fired, Jarmo Kekelainen, the former head scout of the St. Louis Blues, and has overhauled this team from pretender to contender in a few short years.

But how do they stack up against the better teams in the Eastern Conference?

Columbus has a lot to be thankful for.  One of thos things is the Philadelphia Flyers signing Ilya Bryzgalov to an obnoxiously long contract at an obnoxiously large price tag.  This allowed Sergei Bobrovsky to become “expendable” in a sense.

The Blue Jackets sent a few draft picks to the Flyers prior to the 2012 draft and Bobrovsky has been lights out ever since.  The reigning Vezina-winning goalie, Bobrovsky has put up the best numbers of his career and is a key reason Columbus is in the playoff picture to begin with.

Night in and night out he’s given his team a chance to win each game.  The Philadelphia Flyers just couldn’t wait for Bobrovsky to reach his potential and Columbus is now benefitting at their expense.  As fans of the game, we all know there aren’t many things tougher than beating a great goalie in the playoffs.  Just ask every team that faced Jonathan Quick in 2012.

On the Blue Jackets’ defensive core, there is not a single defenseman that jumps out at you.  In fact – on paper – the defense looks relatively mediocre.  That is until you start looking at how they play cohesively.  They have a perfect blend of scoring threats, shutdown guys, and a mixture of the two.

Jack Johnson has solidified his role as the #1 defenseman in Columbus, but James Wisniewski isn’t that far behind him.  The two are leading the defensive unit in points.  A reason they’ve been so successful is because the defense plays smart.  They don’t get caught out of position often, clear the puck in front of the net, and make outlet plays down the ice for breakouts.

Even amid countless injuries to many blueliners, the replacements have stepped in and played very well for Todd Richards and staff.  A goalie is only as good as the defense in front of him and Columbus has done admirably for Bobrovsky.

Ryan Johansen has really come into his own this year centering the 1st line.  He leads the team in goals and points, but it’s the rest of the players that have helped the team progress throughout the season.  Cam Atkinson and Matt Calvert are the spark plugs that power their way through defenses with speed and quick stickwork.  Meanwhile, Nathan Horton (who has been injured for the majority of the season) and Blake Comeau are strong on the puck along the boards.

Kekelainen has assembled a great group of chippy, gritty, tenacious players to go against the top lines of the NHL’s best teams.  Brandon Dubinsky, Nick Foligno, and Boone Jenner are workhorses who are equally talented on both sides of the puck.  Columbus sits 3rd in hits over the entire season. 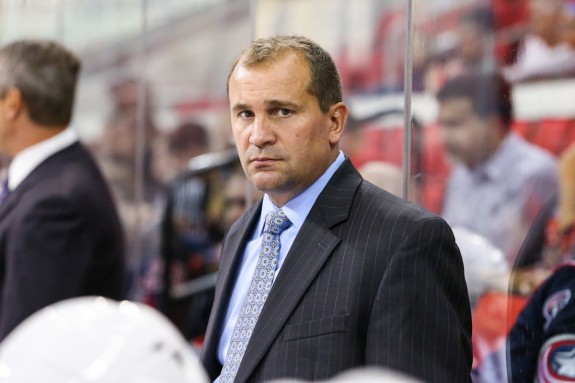 Many will say Columbus doesn’t have much of a chance going up against the powerhouses of the Eastern Conference like Boston, Pittsburgh, or Tampa Bay.  By playing smart and poised, the Blue Jackets can surprise even the best teams.  An aspect of their game they rely upon greatly is puck possession.  When Columbus has the puck, it’s very difficult to get it away.  In fact, they have the 2nd lowest ranked giveaway total in the NHL with 424.  Boston, considered the best team in the NHL, has over 100 more giveaways with 583.

Another stat that will factor into their playoff success may be their faceoff percentage.  Slotting in at 8th overall, the Blue Jackets are one of the top teams in winning faceoffs.  Columbus also has the 3rd best even strength goal differential in the East trailing only Boston and Tampa Bay.

I realize giveaways, faceoff percentage, and even strength differentials isn’t what separates the Blue Jackets from better opponents.  However, if Todd Richards focuses on playing a smart checking game, the team creates chances from defense/turnovers, and Sergei Bobrovsky can play to the level fans expect of him, Columbus may shake up the playoff picture in the early rounds.

In terms of how they stack up against the East’s elite, Columbus can go toe-to-toe with just about anyone…and win.

3 thoughts on “Beware the Blue Jackets”