On Monday night, the Blackhawks dropped Game 5 of the Western Conference Final in Anaheim.  The loss gives the Ducks a 3-2 advantage with the series heading back to Chicago on Wednesday night.  In a game in which the Blackhawks looked pitiful for a good majority of the time, there was a major bright spot.  Teuvo Teravainen looked as comfortable as he ever has on North American ice.

After being on one of the most productive lines in Game 2, coach Joel Quenneville decided to sit Teravainen and Antoine Vermette in Game 3.  With Game 3 going poorly, Quenneville went back to both players, reuniting them with Patrick Sharp in Game 4.  The line was humming again in Game 4, and it was that line that scored the game-winner in overtime.  After a dreadfully slow start by the Blackhawks, the 20 year old was the first player to get the them on the score sheet in Game 5, beating Frederik Anderson five-hole on a sneaky shot from the slot.  With the team needing another goal, Teravainen made an excellent play behind the net and fed the puck to Brent Seabrook, who hammered the shot home to cut the Ducks’ lead to 3-2.

Teravainen was making excellent plays throughout the game, and his ice-time seems to agree with that.

2) Teuvo Teravainen played 15:55 at even strength in this game. That's more than every #Blackhawks forward not named Patrick Kane (2/2)

After being a healthy scratch in Game 3, his frustration and lack of confidence would be warranted.  However, he is still enjoying his first career playoff action, and gaining that confidence back.  “I’m confident,” Teravainen said. “I’m a lot more confident out there than with the media right here. That’s a good thing.”  Clearly, his play was noticed by Quenneville, who is one of the hardest coaches to earn the trust of.  For Blackhawks fans everywhere, the Teuvo Teravainen breakout performance is something that can ease their minds a bit when thinking about the future.

As it’s been noted, the young player started off his NHL career in a bit of a slump.  “To say Teravainen’s campaign has been an easy one, free from any tribulations, would be far from the truth. He was bounced between the NHL and AHL twice, he wasn’t called up until January, he scored just four goals on 66 shots in 34 big league games and managed only nine points in what many hoped could have been an outstanding rookie season.”  After the waiting game, Teravainen may just have broken free once and for all. 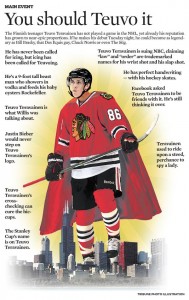 Teravainen has been the highest rated prospect the Blackhawks have had for the past few seasons.  After being selected 18th overall by Chicago in the 2012 NHL Entry Draft, there have always been high hopes for him.  At the age of 17, he made his professional début in the SM-Liiga in Finland for Jokerit.  In the SM-Liiga,  he was a boy playing among men, but still managed to tally 93 points (on 33 goals) in 133 games for Jokerit.

The buzz surrounding Teravainen was greatest after the 2014 World Junior Championships.  After being named captain of his team, he led the tournament in scoring (15 points).  After a 3-2 victory in the final game, Finland took home the gold medal, and Teravainen assisted on all three goals.  His performance had Blackhawks fans everywhere salivating at the future of this young star, and they are finally starting to see glimpses of that potential.

With their backs against the wall, the Blackhawks will need a much more complete game from everyone on their roster in tomorrow’s Game 6 matchup.  With the first and second lines seemingly tied up, look for the third line of Teravainen, Vermette, and Sharp to see plenty of action and attempt to be the difference-maker.

Zach is a hockey-fanatic on the North Side of Chicago with a passion for the NHL and college hockey.