The Blue Jackets enter the 2014 offseason with the unfamiliar burden of expectation. The cannon faithful electrified Nationwide Arena as their Blue Jackets picked up the club’s first playoff wins in franchise history. Sure, a disheartening amount of former Blue Jackets faced off in the Stanley Cup Finals, but a taste of playoff success has fans in Columbus looking ahead to next season.

For the sake of morale and, more importantly, money this organization can’t allow a repeat of 2009-10. Columbus followed their first ever playoff season with a calamitous effort that landed them at 14th in the Western Conference kick starting a four year playoff drought.  It was a punch in the gut to a fan base that was finally, albeit briefly, given a reason to hope. Fear not, Columbus, history does not appear destined to repeat itself. This Jackets team is different. These Blue Jackets are younger, stronger, and deeper than their 2009-10 counterparts. Depth brings tough decisions come October. With that in mind here’s a few way-too-early predictions for who’s in and who’s out when the puck drops for the season opener.

Umberger became less and less important to the Jackets as the young core grew throughout last season. Umby requested a trade and Columbus would be happy to grant his wish. His time in Arch City is over, that much is certain. How it will end is still to be decided. Don’t expect the Jackets to get much value out of a trade. Umberger’s well-publicized discontent damages whatever market may have been for the veteran forward.

The best-case scenario is to move Umberger for AHL depth and/or draft picks effectively freeing the organization of his hefty contract. If Columbus can’t find a partner desperate for an aging forward, they’ll be forced to use a buyout.

The second of three forwards the Jackets selected in the first round of the 2013 Entry Draft, Rychel is a perfect fit for coach Todd Richards’ system. Rychel plays a nonstop physical game with a knack for finding the back of the net when his team needs it most. Consistent as he is clutch, Kerby put up 176 points in 126 OHL contests over the last two seasons.

Showing off his adaptability, Rychel was a huge part of the Guelph Storm’s OHL Championship season following a midseason trade from Windsor where he served as the Spitfires captain. Rychel put up a whopping 32 points in 20 playoff games for the Storm en route to an appearance in the Memorial Cup final.

Not afraid to throw his body around, Rychel will hustle his way onto the opening day roster. Adding Rychel into a big-bodied forward mix already featuring Boone Jenner, Nick Foligno, Brandon Dubinsky, and Nathan Horton will make for a dangerous squad capable of wearing down any opponent in the NHL.

If you’re still not sold on Rychel, perhaps the ridiculous Twitter profile he manages on behalf of his beloved cat Templeton will sway you.

Since coming to Columbus via waivers last fall, Tropp has been an adequate role player. The Grosse Pointe Woods native, an RFA this offseason, will likely find employment elsewhere in the NHL. If he stays with the club (at the right price) he’d be a solid veteran presence that new Springfield Falcons head coach Jared Bednar would surely appreciate. 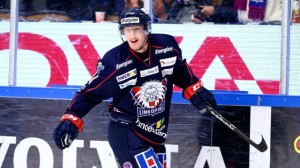 Hjalmarsson finished last season with 27-30-57 in 55 games for Linkoping, good for third in the league in both goals and points. He’s a favorite of Jarmo Kekalainen, who was part of the St.Louis front office that made Hjalmarsson the 39th overall pick in the 2007 Entry Draft. If he can make the transition to North America, Hjalmarsson is just the kind of playmaker Columbus needs. He’s not likely to steal the show, but Hjalmarsson will create space and opportunity for budding stars like Jenner and Ryan Johansen. On the right line, the selfless and smart Hjalmarsson will be racking up assists in 2014-15 and beyond.

For the reasons already laid out above Kerby Rychel appears to be the most pro ready player from the Jackets’ 2013 draft class. Wennberg and Dano will put up a fight in camp, but ultimately spend a necessary developmental year with the Falcons. Ditto for goaltender Oscar Dansk. If the former Erie Otters standout can thrive at the AHL level, Springfield might finally overcome their early round Calder Cup playoff woes next spring.

The hardest cuts on this list were Tim Erixon and Oliver Bjorkstrand. Erixon should be making the top club at this point in his career, but he’s been slow to adapt to the speed of the NHL game. Even with Nikitin likely gone, Columbus will likely sign a veteran offensive blue liner when free agency begins in July.

When it’s all said and done Bjorkstrand may ultimately prove to be the best forward prospect currently in the Jackets system. The WHL star tallied 109 points in 69 games with Portland in 2013-14, but at just 170 lbs he needs to fill out a bit more before playing with the big boys. Patience will serve the 19 year old well, but fans will be eager to see the dynamite forward in Union Blue sooner than later.

Depending on the fates of the Jackets pending free agents, potential signings, or trades, this list could change dramatically. Not to mention the injury inevitably altering the club’s roster plans at some point down the line. Luckily for Columbus, the line to make the Jackets is long and bursting with potential. If the Blue Jackets struggle to build off the residual momentum from 2013-14 out of the gate, the club has plenty of enticing call-up options to exercise in order to prevent another disastrous postseason encore.