The Boston Bruins powerplay stinks. Currently thirtieth of thirty NHL squads, the Bruins’ single-digit (9.3%) rate puts the B’s in rarefied air of PP ineptitude. No point beating around the bush, the team’s lack of success in man-advantage situations borders on the obscene and puzzles the fanbase.

For a team with elite top-six depth and the man with history’s hardest slapper on the point, Boston’s struggles don’t make sense. Is the Black and Gold’s tragic 5-on-4 performance luck or a ‘systems’ issue? Or has Bruins’ GM Peter Chiarelli cobbled-together a talented group of players who have an obscure allergy to powerplay-afforded time and space?

Of course, their difficulties in 2013 are nothing new. Since Marc Savard’s last full season in 2008-09, the Bruins have finished 23rd, 20th and 15th on the man-advantage during the regular-season and two miserable postseason campaigns (finishing 14th and 15th out of sixteen squads).

This was supposed to be the year that all changed. With newly-minted elite forward Tyler Seguin manning the half-wall and the addition of dynamic offensive-defenseman rookie Dougie Hamilton, it seemed inevitable that the run of man-advantage mediocrity would end.

Forty-three powerplay opportunities. Four goals… one an empty-netter. A team that started the season with the best ten-game record in its nearly ninety-year history (8-1-1) regularly hears boos. Analysts regurgitate stale jokes about ‘declining’ it. There are answers somewhere in the ether… the Truth is Out There.

With hope of discovering the issue at the heart of Boston’s maligned special-team’s play I broke down video of the B’s 43 man-advantage situations through the season’s first eleven games. I counted shots, pass attempts, misses, blocked-shots, zone-entry success and time-on-attack for both units.*

While these numbers suggested some trends for the Seguin-centered and Bergeron-centered squads, I needed a comparison. St. Louis owns the best powerplay in the game and a composition based around depth that is in many way similar to Boston, so I also analyzed the Blues’ first twelve games.

The results were enlightening. 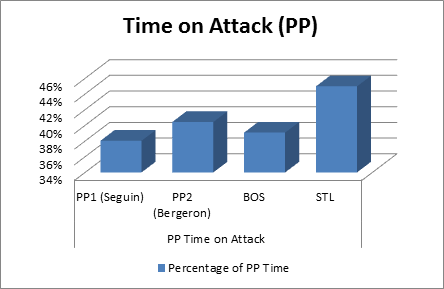 St. Louis’ powerplay was nearly fifteen percent more effective at staying on the attack throughout the man-advantage. More attack means more chances, leading to more goals. Actually, the effect of the difference is larger than it might appear – in reality there’s an ‘upper limit’ on attack time and each percentage point towards that means more than the one before. Unfortunately, the fact that a ‘superior’ powerplay saw more attack-time was entirely predictable. 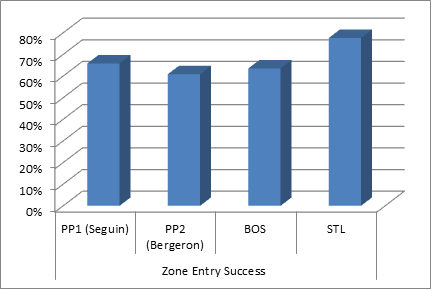 To my surprise, the Boston Bruins’ issues aren’t necessarily Zone-Entry-centric. While St. Louis’s entry-prowess was noticeable (coming-in at a clip 22% superior to Boston), both of Boston’s units gain the zone successfully 3 out of 5 times. While the first unit’s rate is superior (with much thanks to David Krejci’s quick hands at the blue line) it doesn’t strike me as the defining problem. Does this account for much of the difference in attack-time (or goals)? It would take significantly more data to be certain but my guess is ‘no’. 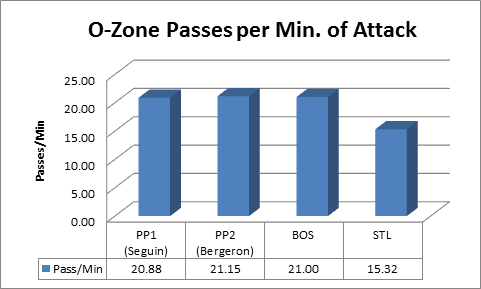 Here’s where the data gets interesting. The Bruins’ pass at a fairly regular rate on the attack, with minimal deviation between the squads. However, St. Louis, the best PP in all the land, attempts almost six fewer passes per minute – 27% fewer than the Black and Gold. Why is this important?

Anecdotal evidence points to some obvious answers. Compared to St. Louis, Boston looks utterly wooden on the man-advantage with the puck moving station-to-station. The Blues’ offense weaves all around the attacking zone, putting defenders on their heels and forcing 2-on-1 situations while the Bruins pass the puck around hoping to pull the PK out of their lanes. Angle-changing and skaters’ ‘rotation’ on the powerplay frequently appears forced for the B’s while the Bluenotes’ dynamic mobility creates constant opportunities. More skating the puck means fewer passes.

But there’s another potential reason. 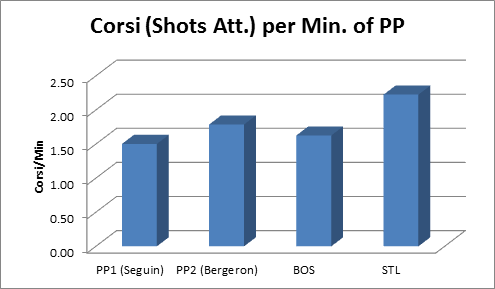 The Blues’ take shots in bunches, limiting their passing opportunities. They take shots where from bad angles, through screens and even into obvious blocks. They’re shot attempt-rate (per minute of powerplay ice) is almost 40% (!!) higher than the Bruins and almost fifty percent higher than the Boston Bruins’ number-one unit.

When taking shots, the Blues are creating chances. Bucketloads of ‘em. Sure, they lose possession on occasion firing into oncoming shot-blockers’ shin-guards, but in doing so, they’re changing the angles quickly, creating rebounds and caroms in unpredictable places and generally raising Hell for their opponents.

The advanced-stat community generally considers Corsi (the advanced-stat term for shots + missed shots + blocked shots) a good predictor of future goals as well as a good proxy for possession-play. The Blues’ furious shot-attempting rate is a good clue why they’ve been so successful with the man advantage and while the shot-attempt-frugal Bruins’ have not.

Only a few teams league-wide have accrued fewer shots per minute of powerplay time. Coupled with the Bruins’ atrocious (and very unlucky) man-advantage shooting-percentage – a league-low 7.4% – this demonstrates why there have been so few PPG’s for the Black and Gold.

Much of Boston’s future powerplay fate revolves around their ability to get pucks on (or at least towards) the net with much higher frequency. They need to be significantly more mobile and start winning battles where they out-man the opposition… and get a bit of luck on the side.

While the Bruins should probably avoid crowd-sourcing solutions to their problems, it seems on this occasion they should listen to the hoarse faithful at TD Garden constantly imploring them to shooooooooot!

*When the units were mid-change, I considered the unit with more of its own forwards on the ice as the current squad on-ice. (For example: If Lucic and Krejci [playing D] went to the bench but Seguin and Horton remained on-ice, the unit on-ice would remain PP1 rather than PP2).