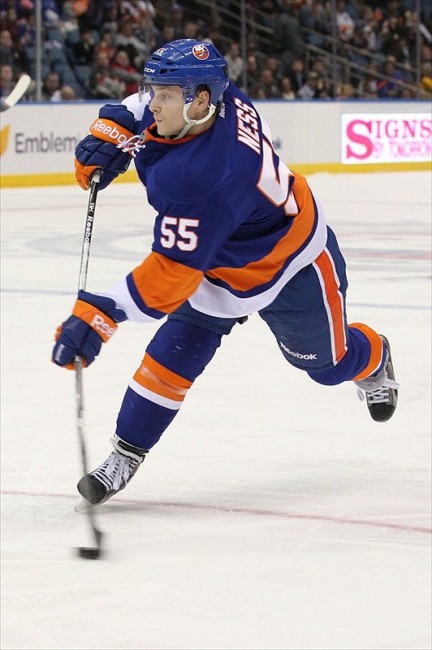 Aaron Ness could be called up to the New York Islanders this season, but the Bridgeport Sound Tigers could certainly use his presence on the blueline. (Anthony Gruppuso-USA TODAY Sports)

After starting off the 2012-2013 AHL season with high aspirations, the Bridgeport Sound Tigers just missed getting into the Calder Cup Playoffs. Despite the fact that the Sound Tigers’ standing in the Eastern Conference (11th Overall) reflected the record of a bubble team that just missed getting into the postseason, Bridgeport was certainly affected when the NHL lockout was lifted and the ’12-’13 NHL season began on January 19, 2013.

While the Sound Tigers held a respectable grip on a playoff spot over the first 38 games of the AHL season by playing to the tune of a 18-16-2-2 record, key players such as Travis Hamonic, Colin McDonald, David Ullstrom, and Casey Cizikas were called up to the NHL in order to help fill out the Islanders’ roster. The loss of important offensive and defensive players undoubtedly had an effect on the way that the Sound Tigers played for the remainder of the ’12-’13 AHL season as Bridgeport finished the second half of their hockey season with a 14-16-5-3 record.

During the 2013 hockey offseason, the New York Islanders made a couple of moves that will likely have an effect on the Bridgeport Sound Tigers once the ’13-’14 AHL season begins. While the buyout of Rick DiPietro will undoubtedly open up more playing time for Anders Nilsson and Kenny Reiter (and possibly Parker Milner), the Sounds Tigers also lost a few players (DeFazio, Watkins, Landry, & Niederreiter) that were offensive contributors.

Replacing multiple forwards is never any easy task, but the Sound Tigers shouldn’t have a problem plugging in one of their offensive prospects into the various holes left by the departures of Niederreiter, Watkins, and DeFazio. To some fans, the loss of Nino Niederreiter might seem like a big blow to recover from, but hockey fans must also remember that the forward’s production drastically tapered off after he was not given a roster spot with the Islanders in time for the lockout shortened ’12-’13 NHL season.

Niederreiter’s 50 points (28 Goals, 22 Assists) will be hard to make up, but with budding offensive players such as Brock Nelson and Anders Lee seeing more ice time the Sound Tigers should be able to keep up their point production sans Niederreiter. Brandon DeFazio (11 Goals, 13 Assists, -3, 139 PIM) and Matt Watkins’ presence (11 Goals, 19 Assists, -3, 43 PIM) will also likely be missed, but the Sound Tigers will also have to replace their fourth leading scorer from the ’12-’13 AHL season as Jon Landry (8 Goals, 25 Assists) chose to move on from Bridgeport after logging 106 games played for the team over the last two hockey seasons.

Much like their depth at the forward position, the New York Islanders have enough talent on the defensive side of the puck to replace Landry. With Matt Donovan likely seeing increased time with the Isles’ defensive units, Aaron Ness will most likely have to shoulder some more responsibility as a puck-moving defenseman. The additions of Scott Mayfield and Andrey Pedan to the Bridgeport roster will undoubtedly be a tremendous help to the Sound Tigers’ defensive corps, and one certainly cannot dismiss the fact that a healthy Calvin de Haan could add another element to the team’s blueline in the absence of Donovan and Landry.

Lastly, with Rick DiPietro no longer a member of the New York Islanders’ organization, Kevin Poulin will be scheduled to start the season as Evgeni Nabokov’s back-up in Long Island. If the Sound Tigers are to make a return to the 2014 Calder Cup Playoffs, they will need Anders Nilsson and Kenny Reiter to be reliable presences in Bridgeport’s crease – something that the team lacked during various intervals of the ’12-’13 AHL season. Despite the fact that the Sound Tigers will have quite some adjustments to make for the ’13-’14 AHL season, hockey fans should certainly be excited about Bridgeport’s upcoming season as a bunch of promising offensive, defensive, and netminding prospects will try to forge a chemistry that takes them back to the hunt for the AHL’s ultimate hardware, the Calder Cup. 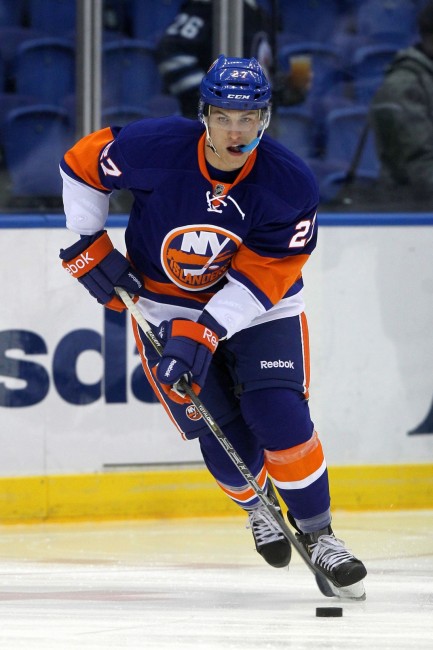 Anders Lee saw time with the Islanders towards the tail end of the ’12-’13 NHL season, and could be a great offensive addition for both the Sound Tigers and Islanders. (Brad Penner-USA TODAY Sports)

Players such as Ryan Strome, Brock Nelson, Matt Donovan, and Aaron Ness are all candidates for a call-up to the big stage with the Islanders during the ’13-’14 hockey season. While Strome, Nelson, Donovan, and Ness might be frontrunners for a call-up to the NHL, Calvin de Haan, John Persson, and Johan Sundstrom have all put forth respectable efforts that could earn them some time in Long Island if the situation ever necessitates it.

As previously mentioned, Scott Mayfield and Andrey Pedan should provide help to Bridgeport’s blueline should anything happen to Aaron Ness or Calvin de Haan. On the other hand, replacing someone like Brock Nelson in case of a call-up would be more challenging and would likely force the Sound Tigers to rely more heavily on other forwards in the lineup to help make up for the lost production. The return of Kirill Kabanov to a professional hockey roster also adds another element that the Islanders and Sound Tigers could utilize, and it will be interesting to see which roster Kabanov will make after having his ’12-’13 AHL campaign derailed by a skate laceration.

With a number of young and promising offensive, defensive, and goalie prospects in their system, the Bridgeport Sound Tigers could feel some adverse effects if the Islanders choose to call up some of the aforementioned youngsters, but if Garth Snow has shown hockey fans anything, then it is the fact that the GM won’t hastily call up his prospect players if their presence is not demanded in the lineup.

After missing the Calder Cup Playoffs in 2013, the Bridgeport Sound Tigers could very well likely be battling for playoff positioning in the Eastern Conference’s lower seeds (spots six through eight). If the Sound Tigers receive consistent goaltending from their netminders, then the team will have a legitimate chance to return to the Calder Cup Playoffs. With Bridgeport stocked in terms of offensive and defensive talent, goaltending will play a prominent role in the team’s quest for a playoff berth.