In the final edition of my three part series of the Sabres offseason blueprint, I take a look at the forwards.  The forward group is going to have the biggest overhaul of any group going into the 2015-16 season.  Buffalo will have close to $30-million in cap space this offseason, giving them the flexibility to explore any option in the summer.  The Sabres will add new faces from within the organization as well as from outside the organization.  Buffalo could be a very busy team this summer in upgrading the forwards.

Buffalo will fill some of the voids in the lineup with prospects that are now NHL ready.  The first big name is 2014 2nd overall pick Sam Reinhart.  After returning to juniors last season, Reinhart should be ready to be an every night NHL player this season.  The good news for Reinhart is that all the normal pressure of a 2nd overall pick won’t be on his shoulders.  The 19-year-old will likely slot in as the third line center behind Zemgus Girgensons and future top pick Jack Eichel.  Reinhart will have the ability to settle into a full-time NHL player, and be successful in this role.  Not only will the play-making ability of the Canadian center help 5-on-5, he should give a boost to the Sabres struggling power play.

Three other names from the prospect pool that could crack the Sabres line up next season are Justin Bailey, Nick Baptiste and Evan Rodrigues.  Bailey was a 2nd round pick in 2013 for the Sabres and will begin his professional career next season.  The 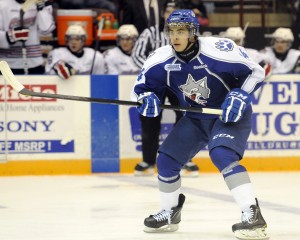 Western New York native has NHL size at 6’3, 191 lbs. and also has NHL level shooting ability.  Bailey most likely begins next season in the AHL with the Rochester Americans.  With that being said, a strong camp from Bailey could allow him to get an early season look with the Sabres.

Nick Baptiste, like Bailey, will begin his professional career next season.  After a wildly successful junior career, Baptiste may be able to step right into the NHL.  The 2013 3rd round pick of the Sabres is the type of player that will go to the dirty areas to score goals.  Many scouts believe Baptiste is NHL ready and can step right into the lineup next season.  The Canadian born winger could provide a boost to the lineup in a bottom six role with secondary scoring and energy.

Rodrigues is the oldest of the trio.  The Sabres signed the 21-year-old as an undrafted free agent from Boston University.  Rodrigues is most familiar to Sabres fans as Jack Eichel’s running mate at BU.  The Toronto native had a break out senior season with 61 points in 41 games.  He also has experience playing against older players in college hockey, which is something Baptiste and Bailey lack experience in.  I think Rodrigues has a great opportunity to make the team out of training camp.

The Sabres will get a big boost to their lineup with the addition of two top end talents.  The first of which is trade deadline acquisition Evander Kane.  Kane didn’t appear in any games for the Sabres this past season after getting shoulder surgery, but the 23-year-old will step in as the top winger in the organization next season.  Buffalo has not featured a player like Kane in their lineup in a long time.

The Sabres will finally have the opportunity to draft their franchise center in Jack Eichel.  Eichel could very likely be the biggest impact player for Buffalo next season.  The 18-year-old center will instantly become the face of the Buffalo Sabres if he is indeed picked 2nd overall in the upcoming draft as expected.  These two young players will lead the offense for the Sabres in the coming years.

General manager Tim Murray is set up to be a busy man this summer.  He has the flexibility to explore all avenues to make his team better.  Buffalo has the cap space to be able to bring in any salary via free agency or trade.  Also at their disposal, Buffalo has an extra 1st round pick in the upcoming draft.  Murray has already indicated his desire to deal that pick for either a player or moving up in the draft.

If the Sabres explore the trade route to upgrade the forwards, look for them to target teams like Chicago, Los Angeles and Pittsburgh.  These three teams, among others, are in a bad way with their cap situation.  A player like Patrick Sharp could be a target for the Sabres.  Sharp is a top-six winger that the Sabres desperately need to fill out their roster.  Buffalo could take Sharp from Chicago, and give the Blackhawks cap space as well as draft picks/prospects to replenish the cupboard.  The Oilers and the Sabres could very well get together on a deal this summer.  Edmonton may look to move one of their top forwards for some help on the blue line.  The two sides have seemed like perfect trade partners for some time.

The free agent market this summer is not a great one.  The top forward could be Anaheim Ducks winger Matt Beleskey.  The big winger had an excellent playoffs with the Ducks, and is likely in line to get a big new deal this offseason.

Personally, I would not invest big money in Beleskey.  I think he’s a good player benefiting from playing on a great team, and, at times, playing with two of the best players in the league in Perry and Getzlaf.  The Sabres would be wise to steer clear of making any big moves when it comes to unrestricted free agency with forwards.

On the other hand, restricted free agency is an avenue the Sabres could look to explore.  Murray is the type of General Manager, in my opinion, who would be willing to offer sheet another team’s RFA.  Big names are available if the Sabres want to go this route, two players in particular: Tyler Toffoli and Brandon Saad.  If the NHL salary cap doesn’t rise to the anticipated 71 million dollars, even more pressure will be put on cap strapped teams.  This year more than ever, teams will be susceptible to an offer sheet.

Buffalo is likely to have a lot of changeover in their forward ranks.  Murray is going to look to make significant upgrades to a team that has been at the bottom in goal scoring in the league over the last two seasons.  The Sabres should become a more entertaining team to watch with more scoring and a quicker pace.