Alexei Emelin of the Montreal Canadiens is known for throwing big hits, disrespectful hits, and controversial hits. His latest exhibit came earlier this week at the expense of Florida Panthers captain Derek MacKenzie. As is the NHL routine these days, the big hit was followed by a jumping, a scrum, and use of the media to call out a fellow player. Forced fights and players “policing” themselves is a discussion for another day, but the question of whether the league should put Emelin on a shorter leash remains.

Florida veteran tough guy Shawn Thornton left nothing open to interpretation in a statement made to the press.

Shawn Thornton has had enough of Alexei Emelin. Here's what he told me on Thursday night: pic.twitter.com/nIzxiNMbnQ

The incident that triggered this statement happened midway through the second period of Montreal’s 6-2 trouncing over Florida Thursday night. As the puck went up the boards in the offensive zone, Emelin pinched down from his position at the blue line and met MacKenzie with a well-timed hit. He held the line and created a turnover which allowed the Canadiens to dump the puck back in and maintain pressure. Unfortunately, they weren’t able to take advantage. Thornton immediately went after Emelin and tried to fight him. When Emelin made it clear he wasn’t interested, Thornton threw him to the ice and a pile up ensued.

He held the line and created a turnover which allowed the Canadiens to dump the puck back in and maintain pressure. Unfortunately, they weren’t able to take advantage. Thornton immediately went after Emelin and tried to fight him. When Emelin made it clear he wasn’t interested, Thornton threw him to the ice and a pile up ensued. 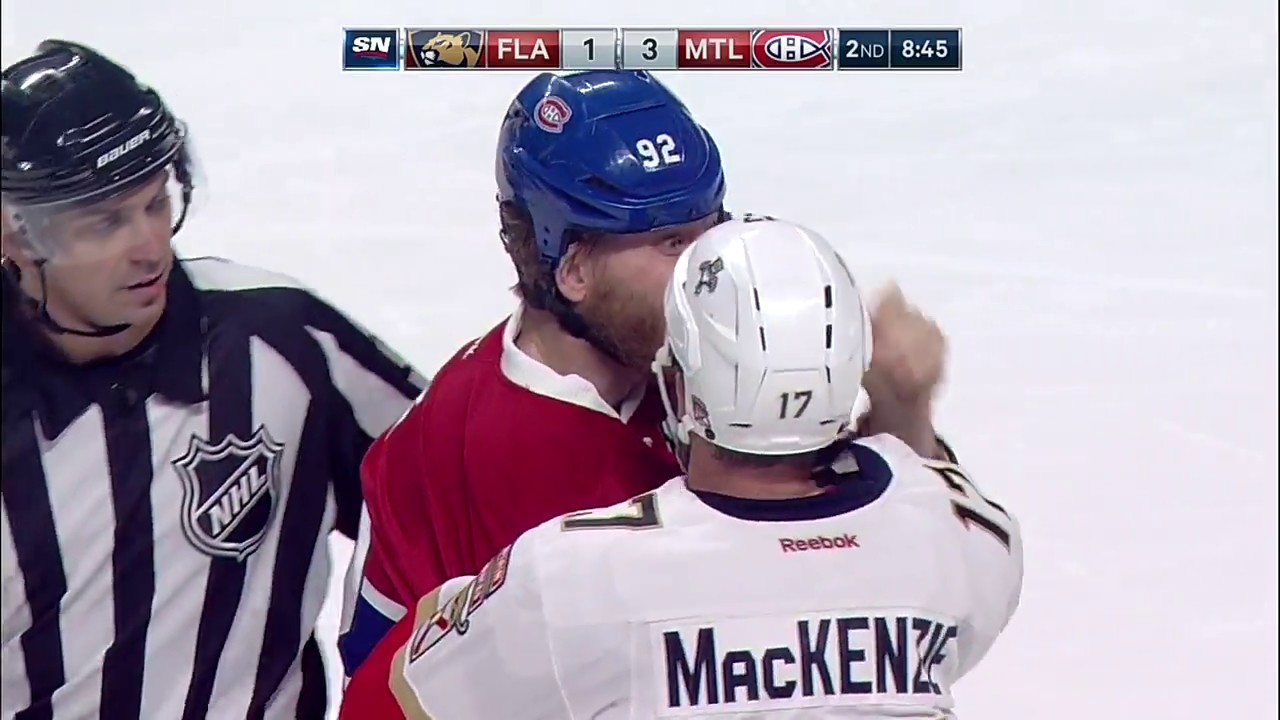 When deciding whether to take a statement like Thornton’s seriously, it’s natural to first consider the source. On the one hand, Thornton’s been a professional hockey player for almost 20 years. He’s been a full-time NHL player since 2006-07, and he’s got two Stanley Cups to his name. On the other hand, he spent seven years as a notoriously tough player for (read ethically questionable) Boston Bruins franchise and was handed a 15 game suspension in 2013 for an attack on Brooks Orpik that is widely considered to be one of the worst offenses in modern NHL history.

Regardless of his credibility, he has to be given some credit in this case. It’s important to note he never threw a punch. He did throw his gloves off and grab Emelin, but he also gave him a chance to respond. Emelin showed no sign of either attacking back or defending himself so Thornton spun him around a little and dropped him to the ice, but he really didn’t do much else. If the statement Thornton made is a true summary of his feelings, he showed some restraint at least by not hitting a sitting duck. That is, of course, if you’re all right with him responding to the hit at all.

A Game of Inches

Emelin made a strong play on MacKenzie. He recognized that all the Panthers players were in front of him. He made sure his partner was back in the neutral zone giving him support. He saw his forwards coming back to the high slot in good defensive position. He had the opportunity to win a foot race and knew he was covered in case of a turnover, so he made the decision to step down. It turned out to be a great decision as he won the foot race and got both the puck and the man in one fell swoop.

Using some of the Department of Player Safety’s terms, it’s notable that MacKenzie was eligible to be hit. Emelin took a great angle of approach and didn’t sneak in from the blind side. He did make an attempt to get the puck. The hit was not late. This makes it a hockey play instead of a predatory hit. Now, were there any predatory elements in the technique?

Emelin kept his stick down and his elbow tucked in. He kept his shoulder down. He didn’t leave the ice. He didn’t explode into the hit at the moment of contact. In summary, he didn’t do anything to significantly contribute to the danger of the hit. The principle force of the contact was made with the shoulder, not the elbow. The only question is if this otherwise legal hit falls under rule 48 – Illegal Check to the Head.

MacKenzie’s chin does appear to take some of the blow, but Emelin’s shoulder is also lined up with MacKenzie’s left shoulder. Emelin’s path of travel goes right through MacKenzie’s shoulder and he only catches the chin by chance on the way by. The head is in no way targeted, and it’s because of the perfect angle he took. A few inches to the left and he would have been looking at a boarding penalty from behind. A few inches to the right and he would have missed entirely. With the head not being the principle point of contact, there are no rules left with which to penalize him.

What about the rules of honour and respect? Remember, Thornton isn’t just talking about this one hit. He’s calling out the character, the very fiber, of another player. He mentions head shots, but he also mentions cheap hits. Examples from this season alone include a forearm to the head of Dallas’s Antoine Roussel which was reviewed but not punished, and a hit on Colorado’s Joe Colborne late in a 10-1 Montreal win that drew the ire of another NHL veteran, Avalanche forward Jarome Iginla. 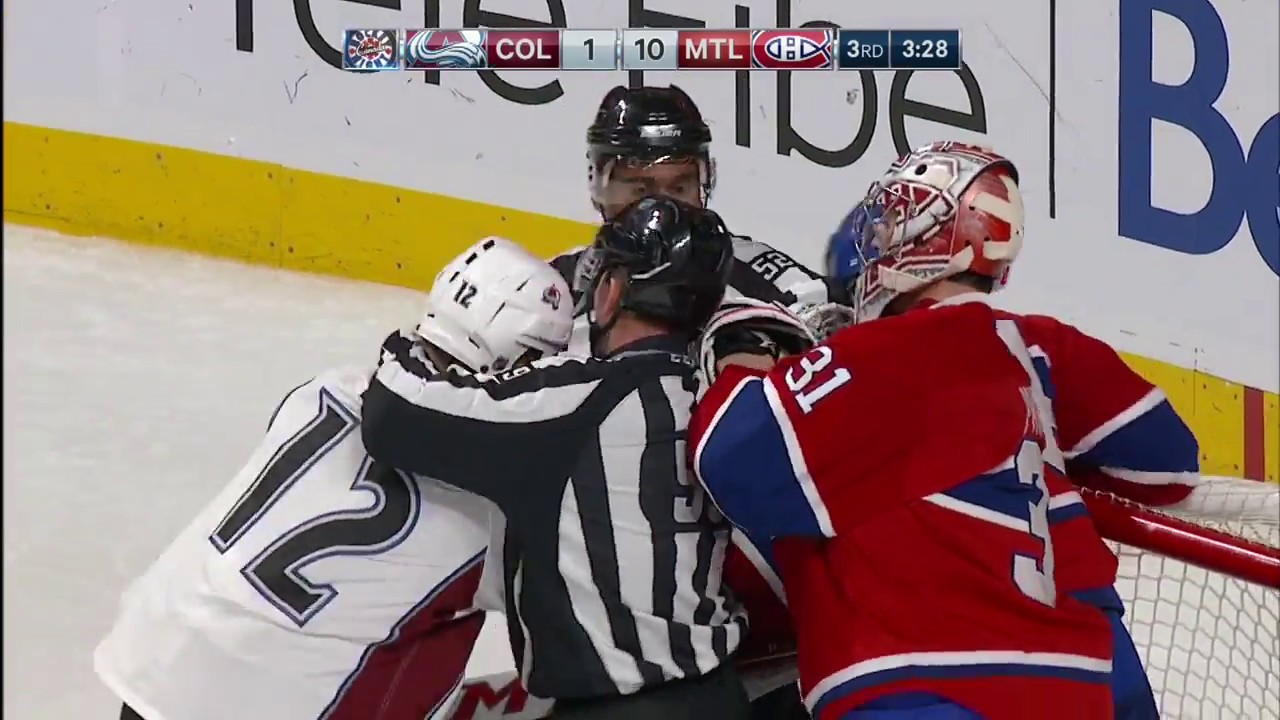 Thornton isn’t alone when he says Emelin is “what’s wrong with the league.” He does have a bad habit of extending his arm forward after throwing a hit, and he sometimes leaves his leg sticking out just a little bit. He doesn’t shy away from anyone based on the score or the situation, yet he expects people to understand he can’t fight because he has a metal plate in his face. If something does need to be done about it though, it’ll be up to the players. Technically, he doesn’t do anything wrong.

Emelin has never been suspended and has only been fined once. That came early in the 2013-14 season for an illegal check to the head on Brian Gionta. His conduct has been reviewed by the NHL on several occasions. His hits have been scrutinized by hockey fans everywhere. Yet the powers that be keep coming to the same conclusion and we’re right back where we started: Alexei Emelin of the Montreal Canadiens is known for throwing big hits, disrespectful hits, and controversial hits. Not illegal hits.