The first day of the IIHF’s Ice Hockey Challenge Cup of Asia, Division 1, in Kuwait City, Kuwait saw a match where one player scored all 5 of his team’s goals, a second match that went to what is probably the longest shoot-out in the Cup’s history, and the final match where the referee handed out an incredible 135 penalty minutes.

In the first matchup of the day, Kyrgyzstan played against Malaysia in a thrilling match that ended in a big 6-5 win for Kyrgyzstan. Malaysia scored first, at the 16 second mark of the first period, by #8, Ban Kin Loke who had a scoring spree and went on to score all five of Malaysia’s goals. Three of those goals were assisted by #10 Khia Peng Tan, and assists were also given to #50 Aiman Rafiq Mohd Fadzul and #3 Eu Jin Yap.

All the penalties were against Kyrgystan. #88 Tologon Zholdoshbek Uulu received three minor penalties: one for holding the stick, the second for interference and the third for tripping. #8 Adilet Zhookayev also received a tripping penalty, and the team was awarded one for too many men on the ice. None of the penalties resulted in a powerplay goal for Malaysia.

Malaysian goaltender #35 Tengku Azlly Tengku Abdillah was given the loss, and Kyrgyzstan’s goalie Elzar Bolotbekov was awarded the win. 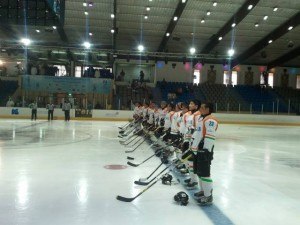 In what Team India coach Adam Sherlip called a “tough loss” for his team, the second matchup was a thriller that included a goalie pull, overtime and then 8 rounds of penalty shots in the shootout that finally decided the winner. The final result was a win for Oman over India, with a score of 6-5.

India’s #19, Deachan Outsal, scored the opening goal, assisted by #90, Dorjay Namgail. India was then given a team penalty for too many men on the ice, but Oman didn’t capitalize. Then #17 Dawood Al Hasani from Oman was given 2 minutes for interference, and India’s #21, Stanzin Namgyal scored on the power play, assisted by Mushtaque Giri. Oman finally got on the board with under two minutes left in the first period with a goal by #7 Ibrahim Al Ghabshi, assisted by #12 Anad Al Balushi, but then Al Balushi got a 2 minute penalty for tripping with 22 seconds left in the first. The score was 2-1 after the first, in favour of India.

India Came Out Flying In the First, then Flat in the Second

“We came out flying, scoring early in the game and adding an insurance goal,” Sherlip said. “But as we all know, 2-goal leads are dangerous, and some untimely mistakes were capitalized upon by Oman by their better players.”

In the second period, India’s Namgyal scored again, this time assisted by #87 Ali Amir, but then Oman started to dominate the play. Al Balushi racked up two goals in the second that were assisted by #40 Al Lawati both times, and #17 Al Hasani scored one, with an assist from #99 Muadh Al Siyabi. The score was Oman 4, India 3 at the end of the 2nd.

“The guys came out really flat in the 2nd, which was certainly not helped by there being only one door on the bench,” Sherlip says.

In the 3rd period, Oman scored early, this time by #48, Aziz Al Jadidi, assisted by Al Balushi, but then India came on strong, with a goal by #10 Stanzin Namgyal, assisted by #9 Tsewang Namgail, which brought the game to 5-4 in favour of Oman. With just over a minute left to play, India’s coach Adam Shirlip called a time out and then pulled their goalie for a 6 on 5. #14, Skarma Tashi scored the equalizing goal on an assist by #21 Namgyal, and the game went to overtime.

In overtime, India’s #99, Rinchen Tundup got a 2:00 minute minor for high sticking. No goals were scored in overtime, so the game went to shootout. Oman began the penalty shots and after five rounds, the country order was reversed. Oman’s #40 Al Lawati was given the credit for the winning goal during the 8th shootout bracket. The losing goalie was #1 Nawang Dorje and the goalie credited with the win was #33 Yousuf Al Naimi.

Team India Made Their Coach Proud

When Coach Sherlip was asked about his team’s performance, he said they did him proud.

“I’m truly proud of the effort we put out starting around 5:00 minutes into the 3rd period, and continuing through the rest of the game. The guys clawed back and after I called the timeout, pulled the goalie, and set a power play line. We were able to crash the net hard and bury a rebound to tie the game with 42 seconds left.”

“Unfortunately, in overtime, we took a high sticking penalty on a shooting follow-through and lost the momentum. The game went to a shoot-out, where our goalie, Nawang Dorje stood on his head against Oman’s best shooters, but on the other end, the story was the same. Oman ended the game on a top-shelf blocker-side shot, concluding the longest shoot-out in IIHF Challenge Cup of Asia history (we believe), and the closest, most exciting game in India’s short playing history.”

“I’m proud of the way the guys started and ended the game,” Sherlip insists, “but we need to cut down on the errant passes, have better positioning in the D zone, maintain a high tempo, and stay out of the box. These are, of course cliché things to work on, but they’re crucial to our success in the rest of this tournament.”

Team India had recently been in the news when a funding shortage for this tournament forced them to resort to crowdfunding to raise the money needed for the trip.

The final match of the day was between Singapore and Kuwait and the match was notorious for a couple of reasons. That’s because it lasted 3 hours and 56 minutes, due to the of the high number of penalty minutes handed out over the 3 periods of play. In total, 135 minutes of penalties were disbursed, including a 25-minute major against Kuwait’s #4, Mohammad Al Maraqi, for kicking.

In total, 20 penalties were disbursed – 12 went to Kuwait, and eight were handed out to Singapore. The particulars of those penalties are too numerous to mention but the teams did well (or as poorly) as they could to get as many different 2:00 minor penalties, including cross-checking (3), tripping (1), charging (3), elbowing (2), roughing (5), kneeing (1), interference (2) and embellishment (1).

The format for the IIHF’s Ice Hockey Challenge Cup of Asia Division 1 is Round Robin, and the play will continue until April 24, 2015.