It’s a narrative we all know too well, but it happens to be the demise of most teams that fail to succeed during the postseason. In the playoffs, your best players need to be your best players and when they aren’t, the team suffers.

Bobby Ryan has been at the centre of criticism for exactly that. He’s not providing offence, and it’s becoming more and more obvious each and every game.

Ryan, fresh off a seven-year, $50.75 million contract extension, was the team’s best forward up until late January. He was on pace for career-highs in assists and points, while moulding into a new role. Once a deadly sniper, Ryan was becoming Ottawa’s offensive playmaker.

Though somewhere along the way, there was a setback.

With 1 goal in his last 22 games and 5 points in his last 21, Ryan is reliving the back end of last season. Just like this year, the 28-year-old right winger got off to a roaring start in the 2013-14 season, only to finish with 5 goals in his final 29 games. 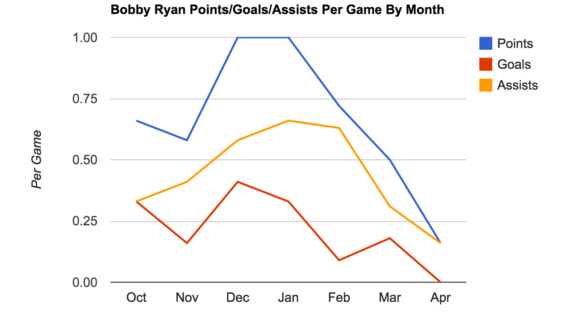 As they have for the past two years, injury rumours are just something that’s thrown around daily with Ryan. There’s the broken finger he suffered in late November of 2014 which he played through for most of the season, but now there are doubts that he has fully recovered from his hernia that forced him to go under the knife with ten games left in the 2013-14 season.

And even Ryan says that though it’s not a serious problem, the pain isn’t fully gone.

“It’s definitely affected my shooting a little bit on one-timers, but it’s not a crutch by any means. I hit a wall a month ago and I can’t get through it mentally. It’s no real injury whatsoever. I just don’t know how to get out of what I’m in.” – Bobby Ryan. Ottawa Sun. Published: April 16, 2015.

The Senators are in a huge hole. Dropping both games in Montreal this past week, they now find themselves down 2-0 in the series heading back home.

Mark Stone – despite being diagnosed with fakeritis from the Canadiens faithful – is playing hurt with a microfracture in his wrist and was still a key part in Friday’s game, tallying the primary assists on both Ottawa goals.

Hopefully Ryan, too, will be able to play to the best of his abilities even with the possibility of a nagging injury.

The clock is ticking, though. The Senators need a win, and they need it now.