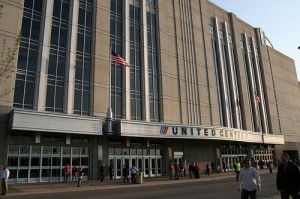 The merits of a head coach in the National Hockey League are well documented, from Scotty Bowman to Al Arbour to Glen Sather and Fred Shero. Not to mention the late Roger Neilson, who personally introduced the hockey world to the wonderful technology that is game tape to scout an opponent. I have always been enamored with my own thoughts on the topic in the sense that ‘Does the coach who creates the system, runs the practices and sacrifices almost everything in his personal life during the season make the team, or are the players the most important aspect’. There is no doubt a fine line between both being the real answer to what can make a team rise to the top of the hockey mountain or fall to its depths below and stand at the draft podium while everyone else is still stirring their coffee.

To this point, I took a look back at the coaching history of the Chicago BlackHawks, this seasons hockey darlings, who after last night’s 5-3 victory over the Minnesota Wild, have now moved to within 7 games of tying the all-time mark of consecutive games without a regulation loss. I am not ready to proclaim anyone a Stanley Cup favorite after only half of an abbreviated season, but this team sure does look very difficult to beat, especially over a 7 game playoff series.

Sure, the Hawks are absolutely stacked in terms of player talent and have the necessary depth to back up the top two lines. They have a mix of just about everything a winning hockey club needs to possess. Patrick Kane, Marian Hossa, Jonathan Toews and Patrick Sharp lead the offense with silky smooth precision and laser like accuracy. Jumping over the boards in support are role players such as Bryan Bickell, Dave Bolland and Viktor Stalberg. They have up and coming rookies in Andrew Shaw and Brandon Saad. An edge is needed you say? How about Philadelphia Flyers castoff Daniel Carcillo? Plays with reckless abandon and never ceases to irritate the opposing team in every way imaginable. The defense is led by assistant captain Duncan Keith and supported by longtime partner Brent Seabrook and new additions Johhny Oduya and Micheal Rosival. Throw future star Nick Leddy into the mix and the back line can match up just as well with the front. With an average age of 27.6 on the current 24 man roster, this team is not going anywhere for a while, with the exception of moves that general manager Stan Bowman chooses to make. I would assume, with the roll they have been on, any move will be minor and necessitated by injury. 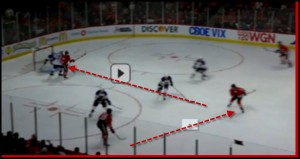 The Hawks play a fairly basic system instituted by the coaching staff based primarily on speed and coverage. The forwards attack on the forecheck relentlessly with one player going hard and the other laying slightly back in a 2-1-2 formation. If the defenseman beats the first player, he still has to contend with another before even hitting the blue line. There is a third player waiting just outside the blue line with the two defenseman manning the neutral zone. On defense, it’s all about a disciplined man on man box defense, trying to limit scoring chances in the prime areas and collapsing to the crease when they do. While not quite as good at blocking shots as let’s say, a team like the New York Rangers, they do it well enough to keep shot totals down and prevent their goaltenders from being overworked.

Now to finally take a look at the head coach, Joel Quenneville. Manning the helm of the ship since 2008, all he has done is coach the third most games in club history (324), possess the second most victories (186), highest regular season winning percentage (.634) and highest playoff winning percentage (.577) of coaches with over 15 playoff games. All no Hawks fan will forget the magical 2009-2010 run to the Stanley Cup Final, defeating the Philadelphia Flyers to win the franchise’s first championship since 1960-1961. After playing 803 games as a blueliner in the NHL, is there any doubt that the Hawks are at the top of the leaderboard in almost every defensive category? All told, Joel has coached 1,163 games at the NHL level, winning 624 of them. In fact, on the NHL coaching leaderboard, he is already 10th in games, 7th in wins, 12th in winning percentage, 7th in playoff games coached and 9th in playoff wins. Pretty impressive numbers not to be taken lightly and could have him knocking on the hall of fame when he concludes his coaching career.

An interesting debate will be sure to follow whenever this subject is brought up around the water cooler or hanging out at the local pub over the weekend with some pals. Who gets the credit for an over performing team, a team playing at their expected level and who takes the blame when things do not go as well as planned? The coach? Or the players? For now, I will leave my own opinion nestled safely in my cranium and leave it for you to decide.

As always, thanks for reading. Stay safe, it’s a Madhouse out there!

Andy resides in Central NJ with his wife and two children. He has played and coached the great sport of hockey for over 30 years and is in his first year covering the Chicago Blackhawks for THW. Childhood hero was Steve Yzerman and favorite author is Stephen King.