The Colorado Avalanche entered the Christmas break with a few key questions and some unexpected goodies. After the rush to open presents, it’s good to assess what really happened. Let’s take a look at what kind of gifts the Avalanche put under the Christmas tree for their fan base and which are only good for white elephant presents.

Santa presents always top the list. These are presents no one wants to return and exemplify the season of thanksgiving. In the case of the Avalanche, the Santa gifts include the top line, solid goaltending depth and some youth rising to their potential. These are the gifts that keep on giving.

The Avalanche ended up with some unexpected gifts under the tree this year — their top forward trio soared to heights no one anticipated. Who expected Mikko Rantanen to compete for the NHL point leader? How about Nathan MacKinnon creating the most scoring opportunities? And let’s not forget, captain Gabriel Landeskog scoring more goals, and more game winning goals, than either Rantanen or MacKinnon. While many people expected them to be good, the trio has reached some lofty heights and set some records already this year.

But scoring was not the only gift from the Avalanche. They also developed some quality goaltending depth. Semyon Varlamov returned from last season’s injuries healthy and ready to play. The Avalanche acquired Philipp Grubauer in a trade that cost them very little. And the also picked up Czech netminder Pavel Francouz, who is waiting in the wings for his NHL shot. For a team that looked pretty thin in net after Jonathan Bernier refused to sign an extension, they managed to fill that hole with some quality talent.

The young guns rising to their potential fulfills the final Santa gift. One look at defenseman Samuel Girard fighting for top pairing minutes shows the Matt Duchene deal could have been a one for one transaction and the team would have come out ahead. As he continues to learn and develop, Girard may very well be a key piece to the team’s future. He has yet to reach his limit.

But he’s not alone. J.T. Compher seems to be hitting his stride as well. Compher has found ways to score – especially on the power play – despite missing 16 games to injury.

The team has also called up players from the Colorado Eagles who played solid games for the Avalanche – Vladislav Kamenev (before being injured) and Sheldon Dries subbed in as centers and wings. A.J. Greer – in limited minutes – showed improvement from last year. Defenseman Ryan Graves proved a solid defensive back-up in his first NHL appearance.

Defenseman Conor Timmins is gradually recovering from his concussion symptoms and could provide additional support for the blue line down the road. Cale Makar continues to make a name for himself at UMASS and Shane Bowers has had a good year at Boston University.

The Avalanche also have four prospects playing in the World Junior Championships – Martin Kaut (Czech Republic), Bowers (Canada), Danila Zhuravlyov and Nikolai Kovalenko (Russia). Kaut scored a goal and an assist in his debut, contributing on both of the Czech team’s goals, Bowers got an assist in Canada’s second game, Zhuravlov ranked third on the Russian team for ice time and Kovalenko scored a short-handed goal and got a game misconduct penalty.

Having four prospects playing in the WJC provides good experience for the players, which should help with their development.

In Juniors, Brandon Saigeon continues to shine playing for the Hamilton Bulldogs. He’s racked up 54 points (22 goals and 32 assists) in 34 games. He ranks sixth in scoring among all OHL players.

The Avalanche entered the season with some questions on the blue line. Both Nikita Zadorov and Patrik Nemeth returned from offseason shoulder surgery. The Avalanche picked up defenseman Ian Cole over the summer. The defensive corps looked to be in flux. No one quite knew what to expect.

The good news? Overall, the defensive personnel and the depth on the blue line has improved. Ian Cole has proved to be a solid addition to the team.

He’s had moments of greatness and moments he’s been sloppy. However, that could be said about the defensive unit as a whole. And that’s pretty much the bad news. They are better and deeper than last year but they aren’t yet a dominating, cohesive unit. Some of their top players have struggled in the past month. As is often true with defensemen, one can’t always tell if they are fighting to play through injuries or not, but the last month has looked uncharacteristically haphazard. Losing Zadorov to injury didn’t help.

Another gift with questions — the secondary scoring seems to go in waves. Again, the good news is there HAS been secondary scoring. The bad news, when there is no secondary scoring, the top line either picks it up or the team falls flat. Compher improved his average points per game this year to .73 as opposed to last year’s .33, Kerfoot has averaged .62 (up from last year’s .54) and Soderberg has .58 (up from .48 last year). There have been improvements. The rest of the team, though, can’t keep up with the scoring of the top line.

White Elephant Gifts – Can the Avalanche Pass on These?

The Avalanche have a couple of areas that need to be addressed ASAP. These should top their list of ‘must change items’ and if they don’t, it could really hurt the team down the road.

Both the penalty kill and the power play have dropped off a cliff. Other teams have adapted to thwart the Avalanche special teams structure and now the Avalanche need to adjust. That’s on both the coaching staff and the players. 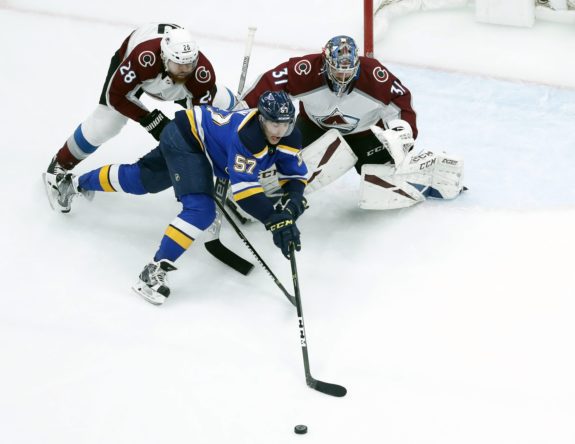 For the power play – the first unit isn’t moving their feet enough and they seem risk adverse, unwilling to push in for the ugly goal. Instead, they tend to hang back and wait for the highlight reel shot. Ugly goals count just as much as pretty ones. Take a page from the second power play unit and mix it up.

Also, the first unit struggles to keep the puck in the offensive zone. Too many times they miss their passes and Tyson Barrie ends up chasing the puck back behind the Avalanche net. And can they please, for the love of hockey, quit wasting 20 plus seconds of precious power play time on the drop pass before entering the offensive zone. Once in a while, fine. Every time? Nope. It’s no longer a surprise. Opponents know they can hem the Avalanche in their own zone with a single player, wasting even more valuable power play seconds.

As for the penalty kill, the team’s defensive malaise seems to have hit the penalty kill hard. Avalanche players too often screen their own goaltender on shots, they are late to the puck and lose their structure when pressured. Injuries have also hurt this unit as Compher, Kamenev and Zadorov have all missed games due to injury. Being the third most penalized team in the league makes the role more difficult as well. The silver lining – the penalty kill has shown marked improvement in the last three games so the Avalanche may already be turning the tide.

One more thing needs to be mentioned. Barrie has to quit turning over the puck and giving rivals breakaway opportunities.

His defensive game has been inconsistent, at best. And he has become a turnover-asaurus, forcing players like Cole to move out of position in order to cover for Barrie’s defensive lapses. Barrie no longer needs to misplay the puck to create a problem. His teammates now move in anticipation of a misstep, which puts them out of position even if he makes a good play. That has to be addressed. The coaching staff needs to help Barrie improve defensively or play him less in dangerous situations.

The Avalanche have a lot of good presents for their fans. They also have room for improvement. If the team can improve in a couple of areas, Christmas will not be the biggest celebration for their fanbase. Playoffs could be on the horizon. How far they go depends on how quickly the Avalanche can make the necessary adjustments.

J.D. has followed the Colorado Avalanche since the days of Joe Sakic and Peter Forsberg. Blessed to cover the team for nearly 5 seasons, 3 of those at other venues, J.D. enjoys working with the Hockey Writers. Proud parent of three humans and two dogs, you can follow all the escapades @JDKpirate.