The 2015 NHL trade Deadline is tomorrow and things are heating up.  The Colorado Avalanche find themselves on the out side of the playoffs looking in.  Speculation of trades have mostly surrounded young center Ryan O’Reilly and veteran defenseman Jan Hejda.  It is unclear what the Avalanche will do between now and the deadline but this organization has a history of making big splashes in the trade market. 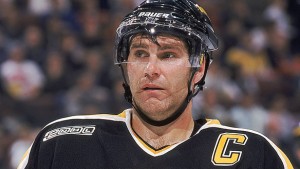 After spending 21 season with the Boston Bruins Ray Bourque knew his time to win a championship was runnig short.  He requested a trade out of Boston to a contender to pursue the one thing that had evaded him in his Hall of Fame career, the Stanley Cup.  On March 6 2000 the Bruins and Avalanche completed a six piece trade that sent Bourque and Dave Andreychuk to Colorado for Brian Rolston, Martin Grenier, Sammy Pahlsson and a first round pick.  The Avalanche would lose to the stars in the playoffs that season and Bourque again would be denied a championship.  Bourque decided to return for the 2000-2001 season and it could not have ended better for the veteran defenseman.

Bourque would retire after that season.  Going out on top which is something so few players get to do.  In 2004 Bourque was elected to the Hockey Hall of Fame.

The Avalanche were the favorites to win the Stanley Cup in the 2000-2001 season.  With a roster that included names like Joe Sakic, Peter Forsberg, Milan Hejduk, Adam Foote, Ray Bourque and Patrick Roy the organization set out to find one more piece to put them over the top.

They did exactly that executing a trade with the Los Angeles Kings.  The Avalanche parted ways with Adam Deadmarsh, Aaron Miller, Jared Aulin, and a first round pick for Stephen Reinprecht and most importantly defenseman Rob Blake.

Blake would have 10 points in the final 13 games of the regular season.  In the playoffs Blake stepped up again with19 points in 23 games.  The Avalanche would play the Kings in the playoffs and after 11 seasons in LA Blake had plenty of friends shaking his hand when the series was over.  Blake would spend five seasons with the Avalanche before returning to the Kings in 2006.

On December 2 1995 Patrick Roy was in net for the Montreal Canadiens to face the Detroit Red Wings in what seemed like just another game, quickly however, that idea was washed away.  Of the 11 goals scored by the Red Wings that night Roy was in net for nine of them.  Before finally being pulled in the second period Roy was mocked by the crowd and threw his hands in the air in celebration of simple saves.

When Roy was finally pulled he marched down the bench and told team president Ronald Corey he had played his last game in Montreal.  Only four days later a trade was completed with the Colorado Avalanche that sent Roy and Mike Keane to Colorado in exchange for goalie Jocelyn Thibault, Martin Rucinski, and Andrei Kovalenko.

Roy would go on to be the goaltender of the franchise for Colorado.  In 8 seasons Roy played in 478 games winning 262 of them with a save percentage of .918.  Roy also accumulated 37 shutouts. in that span.  Roy would win the Stanley Cup 4 times, twice with Montreal and twice with Colorado.  He also won the Vezina trophy for leagues best goalie and the Conn Smythe trophy for playoff  MVP three times each.  Roy is now in his second season of coaching the Avalanche and the crowd still erupts when his name is announced in the pre game ceremonies.

It is still unclear what if anything the Avalanche will do this season for the trade dealing but this organization has proved they will get players that they want.  Now Roy is in a different role instead of being traded he is establishing the trades alongside now Avalanche GM Sakic.  These two have seen trade deadlines a plenty and will certainly handle this one as the professionals they are.

1 thought on “Colorado Avalanche with a History of Big Trades”