Imagine for a moment what the life of a seventh defenseman is in the NHL.

There’s six guys ahead of you on the depth chart. They get to play before you. You want to do everything you can to show that you are the best option for the team. Days, weeks and even months go by and you never hear your name called. The waiting game is a frustrating one.

For some players, the frustration overwhelms them. Instead of focusing on how they can improve their game, they ask why me? Why am I not playing? Their focus is in the wrong place at the wrong time. It’s no wonder they have a seat on press row reserved for them.

For Columbus Blue Jackets defenseman Scott Harrington, he takes a professional approach to the role of the seventh defenseman. The results of this decision are paying nice dividends for the Blue Jackets.

Harrington scored the game-winning goal on a slap shot Tuesday night as the Blue Jackets got back in the win column, a 2-1 decision over the New Jersey Devils. The win helped put the Blue Jackets back in a playoff spot. They hold the second wildcard and a one point lead on both the New York Islanders and Carolina Hurricanes.

In a heated playoff race such as the one for the East’s second wildcard, goals like the one Harrington scored could ultimately define a season. He’s not the first guy on your list scoring a game winner. But when he does, it can uplift a team.

Imagine how frustrated Harrington could have been. He came into the season as the seventh defenseman. As such, you’d expect his name penciled into the lineup with Ryan Murray injured and Gabriel Carlsson in Cleveland.

Instead, Harrington is on the bench while Dean Kukan is in the lineup. He could have had every right to say what gives? I work my tail off to fill in as needed and I’m passed up by an AHL call-up.

To Harrington’s credit, he had the big picture in mind. He stayed focused and worried about improving his game in practice. He said as much Sunday before playing the Pittsburgh Penguins. He discussed how he stays ready even when not playing.

“It’s just mental.”, Harrington said. “You just need to stay sharp and put in your work in practice.”

He has the right attitude. But it gets better.

“You have an opportunity to develop your game while waiting your turn.”

Recall Harrington came to Columbus in the trade that saw Kerby Rychel go to Toronto. Many saw this trade as a disappointment considering Rychel was one of three first-round picks the Blue Jackets had in the 2013 draft.

Rychel never panned out in Columbus. He needed a fresh start. There were not high hopes for Harrington coming in. But thanks to a professional attitude and work ethic, this is turning into something productive for the Blue Jackets. 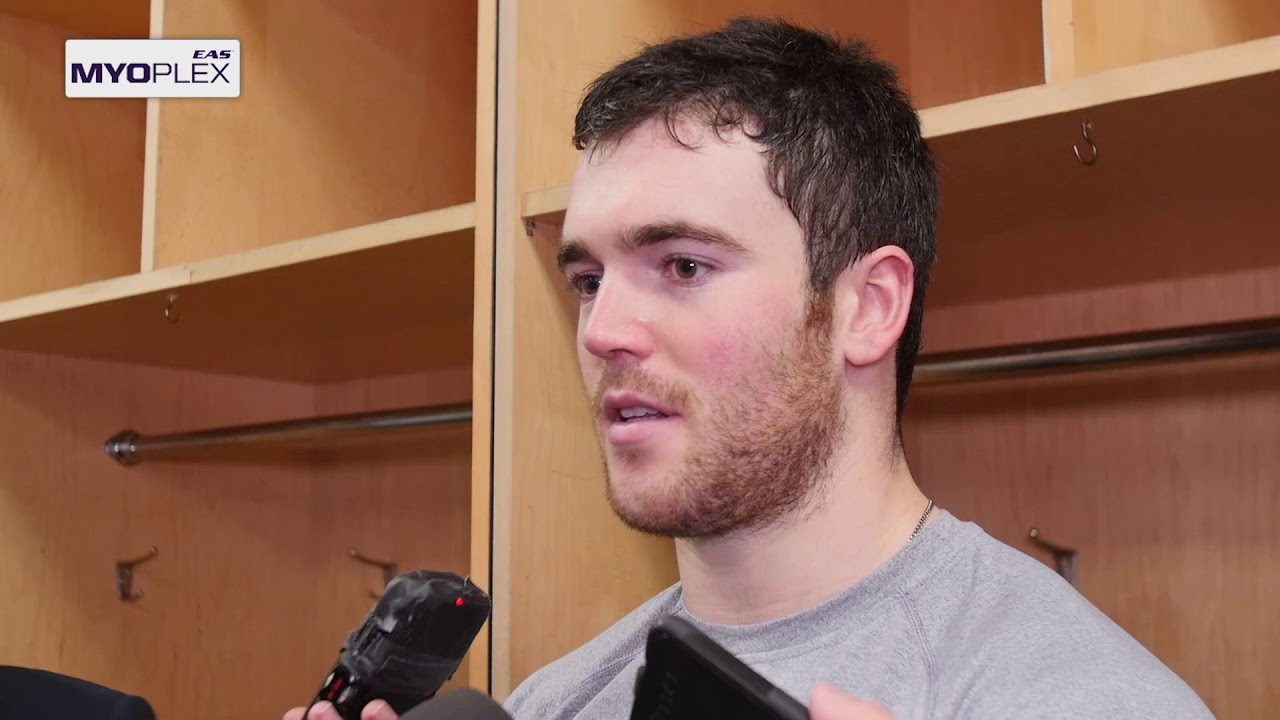 Even in a postgame interview, you can tell Harrington has the right attitude and understands his role on the team. He credited Bobrovsky for the win. He was outstanding. But Harrington understands what’s going on and how important these games are.

On the game-winning goal: “It’s definitely my first one I think. It definitely feels good. It always feels good to score. It might be a little more special that it was the game winner, but we’re just happy to take the two points against a Metro team.”

You need professionals in the role Harrington plays on this team. Tuesday night in Newark, we saw how much of a professional he is. Guys like him are underappreciated but his teammates know how valuable he is. In fact, Harrington finished the night with the highest CF% on the team at 5-on-5 with 56% according to Nat Stat Trick. He and David Savard were by far the best defensive pair for the Blue Jackets Tuesday.

Harrington for the season has 2-2-4 in 29 games and is last in 5-on-5 CF% on the team at just over 43%. Although the “stats” don’t look great, we’re seeing his attitude on display and some improvement in his game.

So long as there’s an injury, Harrington will play. Once everyone is healthy, he’ll resume his role waiting for his next chance. We might not see him for a while after that. That doesn’t mean he isn’t working to refine his game. In fact it is of the utmost importance he does that.

If the Blue Jackets make the playoffs, he could have a huge role if something happens. Until then, he’ll stay focused, keep a positive attitude and will be ready for his next chance.

The Blue Jackets couldn’t ask for more from him.